As the number 1 high school football prospect in the nation according to ESPN and the number 12 overall prospect according to Rivals.com, Myron Rolle came to Florida State with tons of hype and high expectations from the fan base.  Since his arrival, many fans have been disappointed with his production, and other fan bases (as well as some FSU fans) have claimed that he is overrated.  What's been the real reason for why Rolle has failed to meet the expectations of many? 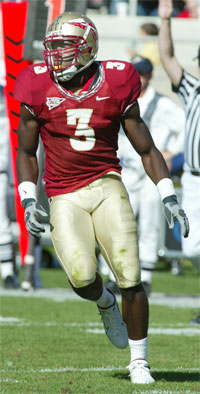 In his freshman season, Rolle was third on the team in tackles with 77, trailing only linebackers Buster Davis and Lawrence Timmons. The next year,  his numbers dropped a tad as he was fourth on the team in tackles with 67.  So far this season, Rolle is second on the team with 25 total tackles.  As the numbers indicate, he is clearly involved in a large number of plays and makes some stops for the FSU defense.  A large reason for why Rolle is in on so many tackles has to do with his ability to defend against the run.  In the FSU defensive scheme, Rolle is constantly lined up in the box to matchup against tight ends, running backs coming out of the backfield, and occasionally receivers in the slot.

Even though his tackle production has been exceptional over his career, the claims that he is overrated and overhyped most likely stem from his inability to make big plays from the safety position.  Over a little more than 2 seasons he has only 1 interception, 2 fumble recoveries, and 1 forced fumble.  As a supposedly can't miss five star prospect, Rolle leaves more to be desired in these areas.

However, his lack of production in these areas may have more to do with how he is used instead of his overall abilities.  As we mentioned earlier, in our current scheme under defensive coordinator Mickey Andrews, Rolle is asked to man cover receivers.  Now think of some big name playmaking safeties, guys like Reggie Nelson when he was in college, Ed Reed, and Bob Sanders.  These guys have two main things in common.  The first is that they play free saftey, a more natural playmaking position from the defensive backfield, as opposed to where Rolle lines up at strong safety, or what Florida State calls the rover position.  The second similarity is that those guys primarily play in defenses that employ the Cover 2 scheme, or how it is referred to as the Tampa 2 in the copycat league know as the NFL.

Before last week's game against Miami,  FSUncensored broke down Miami's Cover 2 Man defense.  This is slightly different than the Cover 2 used in the NFL, where cornerbacks and linebackers usually do not lock on in man to man coverage underneath the 2 safeties but instead also play zone.  This defense is part of the reason why Miami has been so successful at developing playmaking safeties such as the previously mentioned Ed Reed and the recently deceased Sean Taylor.  By playing Cover 2, you give your safeties the freedom to read the quarterback's eyes as well the play as it develops right in front of you.  It allows the safeties to use their instincts and prior film preparation to make plays on the ball.

If FSU switched from there current scheme to the Cover 2, you would likely see Rolle make more big time plays such as interceptions and big hits on receivers coming across the middle.  You would also likely see fewer big passing plays, because the safeties would be able to help the corners on deep balls.  This is a huge advantage to the Cover 2 as opposed to the current scheme, where our corners have given up big plays when they have been in 1 on 1 coverage.  (See Chattanooga's only TD against us)  The downside to the Cover 2 in terms of how it effects Rolle is that his total tackles would most likely decrease since he would line up away from the line of scrimmage more often and would not be as involved in running plays.

Even though Rolle has been considered overrated during his career at FSU, he is still projected to be a relatively high pick.  Mel Kiper lists him as one of the top 5 safeties (includes both FS and SS) that are juniors or younger and still eligible for the next NFL draft.  Also, NFLDraftStock.com ranks Rolle as the top SS prospect for the class of 2010 and a projected first rounder if he were to enter the draft for 2010.  Howver, I believe he will enter the draft after this season and will be drafted around the third round.

Either way, the fact that Rolle has remained a high draft prospect despite not putting up big plays leads me to believe that he is more misused in our current scheme than overrated.  I think that Rolle is very similar to another player that excelled at SS in the Cover 2, John Lynch.  Neither Lynch nor Rolle are the greatest athletes in comparison to other high caliber football players.  However, both are extremely intelligent (Rolle is a potential Rhodes Scholar and Lynch is a Stanford alum) and have good size (Rolle is listed at 6'2" and 218 lbs. and Lynch is listed at 6'2" and 220 lbs.).  Lynch was able to use his football IQ to read plays as they developed (during the Bucs Super Bowl Championship DVD it shows a play during the Super Bowl where Lynch tells Dexter Jackson exactly what route an Oakland receiver is going to run leading to one of Jackson's interceptions) and his size to deliver big hits to receivers coming over the middle.  Given the chance to play in a Cover 2 scheme, I think Rolle would come up with many similar big plays that Lynch has produced over his career.