Share All sharing options for: Florida State Basketball: Number 1 in the ACC

Ok.  It's my turn for a fluff article.  I don't really have anything hard-hitting with this piece, I just wanted to use the platform we have on this site to say... how 'bout them Lady Noles?!

Check out your website of choice for basketball information.  Look at the ACC standings.  Notice who's number 1?

Yup.  The Fightin' Semraus have put themselves atop the ACC standings with an upset of number 3 Duke last night.  This is the second time this season the Noles have knocked off a team ranked 3rd in the country after a come-from-behind win against Texas A&M earlier in the year (Somewhere, Jeff Cameron is yelling "You don't just waltz into the TLC double C and expect a win!!")

Maybe we should all start paying a little more attention.  I know I should.  We always seem to notice the ladies when they're making the tournament at the end of the season and the men aren't, but let's give them some much deserved mid-season credit.

Follow the jump for a look at some pics from last night's game.

I just have to get one thing off my chest here.

How long will we ACC fans continue to let the conference employ such terrible officials?  Across the board, in every sport, we continue to have some of the most poorly-officiated games of any of the major conferences.  I personally don't believe in the Karl Hess or Jack Childress conspiracy theories.  I don't think they are out to get FSU.  I just think that ACC referees are simply that terrible at their jobs.  I used to think the ineptness was confined to football and men's basketball.  Then I saw the ESPN photo gallery.

ESPN has their game story up in the Women's Basketball section.  Included with the story, is a 9-picture gallery from last night.  Look at some of these pictures from the game for the evidence. 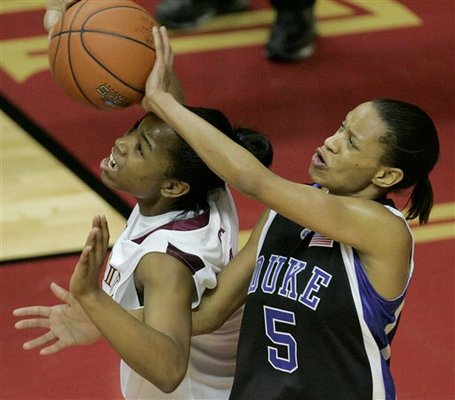 - Curtain Jerker is a site member who frequently blogs for a professional wrestling site.  So CJ, is this an arm-bar, hip toss, or preparation for Bob Backlund's legendary Cross-Face Chicken Wing? 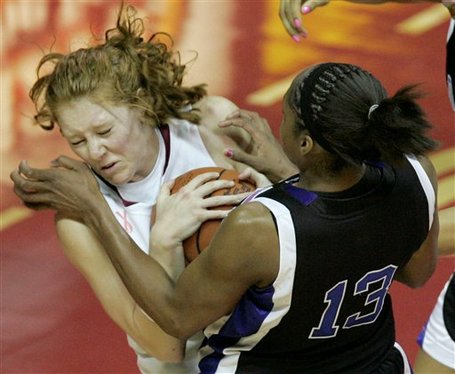 - Either #13 Karima Christmas has the worst halitosis in the history of basketball or she might have just crushed Mara Freshour on this rebound attempt.  No foul called.  ESPN said they "battled."  Side note: Question for the ladies out there.  What's the deal with Christmas' nail polish?  I mean... either paint the nail or don't.  If it breaks or gets worn off... take care of that crap.  I first knew Britney Spears was going crazy when she starting letting her digits look like that. 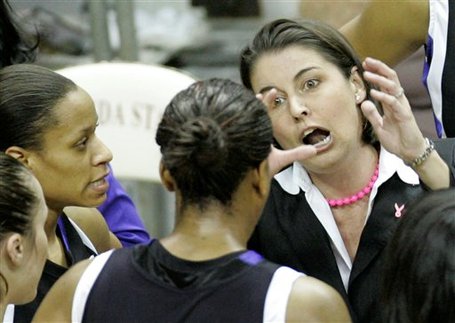 -  "And then Hannibal Lector totally bit the guard's face off like this.  I want you to have that kind of intensity in the post." 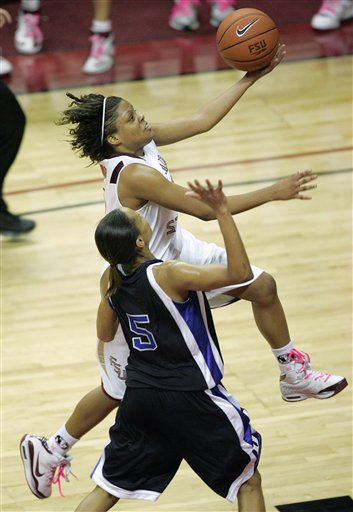 - "I, Jasmine Thomas, do solemnly swear that I will be the first person ever to get posterized in women's basketball."

And lest you think it was one-sided... 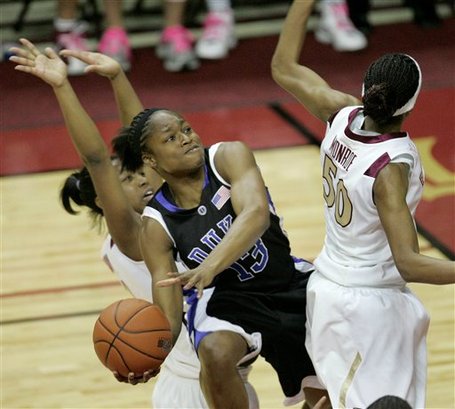 It reminds of the NC State a few years ago when Warchant showed the picture of AJ Nicholson being held back like a crazy boxer at the weigh-in.  No flag was thrown on that play either.

I know these are physical sports and that "you could call a penalty on every play."  But is it too much to ask from the number 1 conference in Men's and Women's basketball and one of the top conferences in football that we get some better officials?