Florida State vs. Maryland: The Final Score and Why I Want To Go Bowling

Share All sharing options for: Florida State vs. Maryland: The Final Score and Why I Want To Go Bowling

I thought this might be a good time to resurrect what was once a weekly series that I started at the beginning of this football season with an optimistic viewpoint, which was known as "THE FINAL SCORE," probably for the last time this year.  This was the weekly prediction column that I mercifully killed due to the fact that everyone pretty much knew what was going to happen after the ball was kicked off on any given Saturday.

Since this upcoming game should be our easiest challenge this season, I thought I would give our self-proclaimed expert staff here at Tomahawk Nation, probably their last opportunity to match our thorough and in-depth understanding of the game, our analytical skills, our wisdom, and our football knowledge, against the wild guesses of you, the TN members.

This game against Maryland, while it may be our easiest challenge this year, IMO may very well be the most important must-win for the Seminole's in decade's, for the following reasons.

A) A win will keep alive our nation leading streak of 27 consecutive bowl appearances.  This is very important to me, and I think it should be important to every Seminole, despite some differences of opinions on this subject which I will address shortly.

2) It will be Senior Day and the last home game for the 17 seniors who endured less than desirable coaching for their entire time in Tallahassee on the defensive side of the ball, and for all but the last 2.8 years on the offensive side. These are the seniors who will be playing their last game on Saturday;

D) It will be the last home game for one of the greatest defensive coaches of all time, Mickey Andrews, after a 26 year career building one defensive juggernaut after another.  Since we, as well as all the other media, have already written at length about MA, I would just like to add the following:

Thank you Mickey for your loyalty to our program. I truly believe without you and your terrific defenses, we may still be seeking our first NC. And especially thank you for coming back these last 2 years, even though you did not really want to, to save us from the alternative.

I only hope that the FSU administration and athletic department do Mickey right in his finale, and not put on a half-assed dog and pony show similar to the joke of a presentation they recently put on to honor the 1999 National Championship FSU team.

VII) While the consensus has changed dramatically during the past week or so, this could possibly also be Bobby Bowden's last game as coach at Doak.  This is not the forum to discuss Bowden and the pro's and con's of his tenure, but even if it is his last home game, I am sure there will be tributes to him next year, and I would like to thank him for dedicating the majority of his life to helping shape FSU's legacy.

Green) While this may truly be a stretch, a win on Saturday would also move the Seminoles another step closer to extending their nation-leading streak of consecutive winning seasons to 33.

On Saturday, our Noles will be playing the last home game of the season against the Maryland Terrapins. (Terrapin defined: any of various edible North American web-footed turtles living in fresh or brackish water).

As always, I expect our Nole's to give a relentless, non-stop, fast and furious, three hour pounding, to the turtles from Maryland, which will undoubtedly leave them with a surprised look on their faces, which can probably be best demonstrated as: 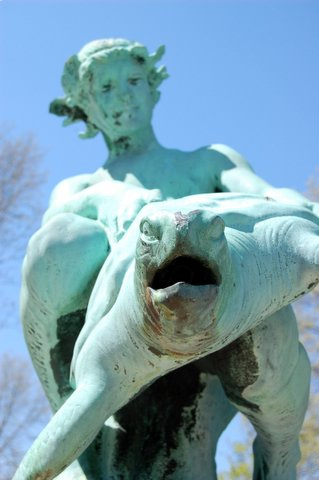 (Another attempt on my part to bring culture, class, and to educate the readers of this site with topical works of art)

Before getting to the predictions, I would like to take this opportunity to discuss my reasons for wanting to go to a bowl game once again this year, which we will be eligible for after we molest the turtles.  I am only bringing this up because several authors and members, up until our win over Wake Forest it seems, had expressed their opinions and reasons why it would be in FSU's best interest if we did not go to a bowl game this year.  Make no mistake, there is some logic to the reasons they give, which by now we all know ad-nauseum.

So I am going to reprint a comment I made recently in response to the following statement.  Keep in mind this statement was made before the Wake game, when the bowl possibility looked bleak, at which time most of the authors and members predicted we would lose the game, except for a handful of glass half-full, kool-aid drinkers, myself included, who went on record as predicting a FSU win over Wake.

Does FSU really want to make a bowl game? Personally, I don’t give a damn about bowl games. I want to compete for championships. Caring about silly stuff like wins records and bowl streaks got FSU to where it currently is. Rooting for your team to miss a bowl game can be seeing the forest from the trees.

Here was my reply to that statement at the time, which I think best expresses my strong belief in the importance of us continuing our bowl streak.

I agree that we should be competing for championships. No debate there.  However,

A) Wins, records, and streaks are what made FSU a national powerhouse and helped us achieve our 14 year dynasty, but I don’t think that has anything to do with where our program currently is. The only common denominator is Bowden wanting 400 wins and the most wins records, but his hiring decisions are what caused us to be where we are today. I would be OK leaving him in Tally while the rest of the team travels, but that is not a option.
Therefore, no negatives, IMO.

2) A bowl, no matter how insignificant, is a reward for the players who have been working their asses off for the past 9 months trying to bring FSU back into prominence. It is a thank you to the players for the effort. F*ck the coaches. I want a bowl to thank the players for their contributions to our program despite the fact that our season sucked. I want a bowl so that the younger players know what they need to do to go to a better bowl next year. IMO, they deserve to go to a bowl and play, instead of watching teams that we should have been better than, and that we should have beaten, on TV over the holidays. There is no down side to going to a bowl and it will probably not cost us any money when you subtract the expenses from the payout. The extra practice time, while it may not do anything for the D, will not hurt either side of the ball and can only help.
Therefore, no negatives, IMO.

D) Most of the Defensive coaches we are considering hiring will be playing in bowls. While there is a month where we can interview and negotiate behind closed doors with their agents, MOST of these coaches would not be able to step foot on campus until after the first week in Jan at the earliest due to their bowls and the holidays.
Therefore, no negatives, IMO.

VII) While it may not mean much to you and others, I want to keep the bowl streak alive and going on 28 because that is really all we have at this time, and probably just as important, I don’t want the f*cking gaturds to have any chance of getting it. I think we will continue going to bowls every year in the future under Jimbo and with the relative ease it is to get into a bowl nowadays, there is no reason we can’t maintain this streak for a long time to come.
Therefore, no negatives, IMO.

Obviously a win over the Maryland will make all of this a moot point.  Nevertheless, I just wanted to share my thoughts on why a bowl game this year should be important to all of us who love the Noles, and from my personal POV.

Here are some fun facts about this weeks match-up against the Maryland Turtles.

-The 2009 FSU offense is gaining more yards per game than Florida State’s 1999 National Championship team that finished with a perfect 12-0 record.

-The 2009 Seminoles offense is the fourth most prolific in terms of total offense since the 1995 season.

-FSU's offense has gained at least 400 yards of total offense in eight of 10 games and surpassed the 500-yard mark three times this season.

-Jermaine Thomas is the first Seminole runner since former great Greg Jones (during the 2001 and 2002
seasons) to rush for 100 yards or more in three consecutive games.

-Five of Florida State’s wide receivers – Bert Reed (51), Rod Owens(48), Jarmon Fortson (32), Taiwan Easterling (29) and Richard Goodman (27) – all have at least 20 receptions through the first 10 games. It marks the first time since the 1992 season that five FSU wide receivers have had 20 or more receptions in one season.

-FSU's tight ends, Caz and Beau, have caught four touchdown passes in the first nine games. They have more touchdown catches this season than our tight ends have had in the past five seasons combined (three).

-Greg Reid's punt return for a touchdown was the first since Tony Carter's against W. Carolina on Sept. 6, 2008, and the first time since the 1995 season that a true freshman had returned a punt for a touchdown.

-Shawn Powell is doing an outstanding job punting, while averaging 41.1 yards on 18 punts.

-Dustin Hopkins has booted 36 percent (21 of 59) kickoffs into the end zone for touchbacks. He has kicked at least one touchback in nine of 10 games and leads his nearest competitor in the ACC by eight. He has also made 26 consecutive PATs and is 10-of-12 on field goal attempts, including  five-of seven from 40+ yards.

-In what was expected to be a year of regression for the special team's kicking unit, these 2 have done a spectacular job replacing Graham Gano(matic).  If Hopkins is able to stay healthy, I see no reason why he won't be our next Groza winner in the next few years.

OK enough of the fluff, let's get on to the predictions of our illustrious staff that you have been clamoring for.

So far this week it is almost a unanimous decision that FSU will win from those staffers that have already replied.  Almost all of us authors are officially kool-aid drinking, glass is half-full, homers, who we will call the GOOD GUYS.

Then we have on delusional author who is apparently trying to use reverse psychology as a means to an end, who we will call a BAD GUY.

And finally, there is MattDNole, with his, how can I say this delicately and with all the respect he truly deserves, a "different" perspective of reality, who we will call "DERANGED AND POSSIBLY IMPAIRED."

Sounds like Matt has got the hots for Ann B. something fierce.

And FSUn= FSU 40 - Turtles 24 as per his Game Preview.
Looks like me and Bud are on the same page for this game.  But then again, most of the scores are all in the same ballpark.  We shall see who gets a shiny prize this time around.  Will it be one of the authors, or one of the members?

Finally, to get you psyched for the game I will leave you with some more art to help you expand your horizons and to class up the joint.  After all, nothing gets football fans more ready for a game than throwing babies, shaking off baby tacklers, and kicking field goals using babies.

Image removed due to NSFW complaints.

And a few different angles of the "surprised" Maryland Terrapin. 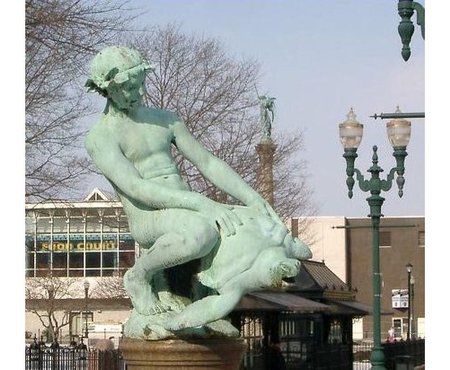 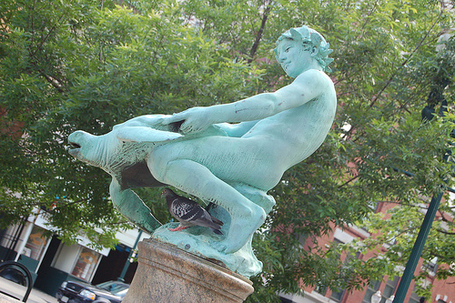 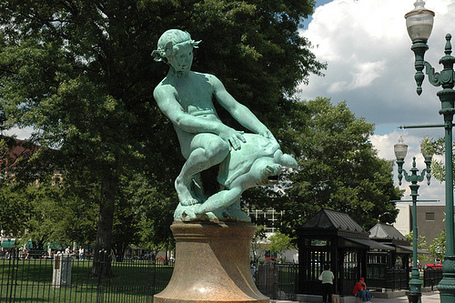