The offensive machine that was the Florida State Seminoles through the first three games of the season got derailed. In a frustrating game, the Seminoles returned to their ways of old: turnovers. Coach Hamilton cannot be pleased with the decisions that were made on the court tonight; however this is not entirely on the players. For the second year in a row, the Seminoles have failed to effectively break the full court press. This team appeared anxious and flustered from the start. After the initial blows were landed, the Gators settled into their game plan and made their shots, some of which were exceedingly lucky. By hitting those shots, and going on long runs, the Gators were able to set up in their full court press. If they miss those shots, Florida State gets out in transition. The fact that the Seminoles do not have a reliable true point was exploited tonight.

In our game preview we stated the following:

2. Establish the paint. Don't get intimidated by the Gators down low. They play physical defense and will likely get a lot of calls at home. This will be a long battle for our big men. Control the paint and force the Gators to shoot threes, which they are terrible at.

3. Keep the crowd out of it. Don't allow any big runs by the Gators. Use time-outs effectively. Keep the stadium quiet. This is an early road test for the Seminoles, no need to add extra pressure.

4. Be patient. This is going to be a close game for most of the contest. Stay calm and take what they give you. Don't lose focus.

**It was also noted that the Seminoles needed to have a TO% of less than 20% to have a shot at winning.

Continue reading to see the follow up to these points...

1. The press was effective and the Gators used it to their advantage. They capitalized on the opportunities that were provided to them by poor ball control/handling and errant passes. The Seminoles finished with 23 turnovers for a TO% of 32%. That will not cut it at the elite level against good opponents. Granted, the Gators had a TO% of 26%, which would typically not be sufficient to win on a regular basis.  Advantage: Florida

2. Alabi had a relatively quiet game in comparison to previous. Gibson was quiet. Reid was quiet. The Seminoles front court contributed 10 of the 23 turnovers. They did, however, out rebound the Gators...by one and the differences in OReb% and DReb% were not significant. The Seminoles only blocked 3 shots. Tyus had a good game for the Gators and Vernon Macklin played good minutes. Statistically, the difference between the groups was not huge, so one could say it was a push. However, the Seminoles big men should have been more productive. Alabi needed more touches. Singleton got hot with his three early and then fell in love with it. He attempted 6 three point shots. This was a concern expressed by TNation in the season preview. Gibson did not have the opportunity to have the impact he should have during this game. Advantage: Florida

3. Florida made a number of runs during this game. The Seminoles demonstrated a stair case scoring pattern. Look at the game flows for the first three games of the year:

Now compare it to this scoring chart: (From scacchoops.com) 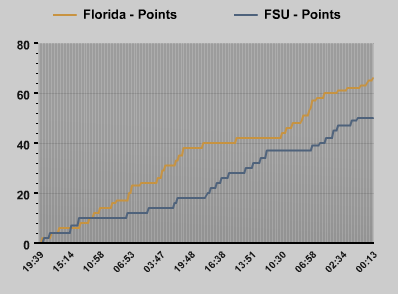 There are a lot of horizontal lines in that image. The previous game flows followed a nice steady increase without the pauses in scoring, meaning the Gator when on big runs, keeping the crowd in the game and flustering the Seminoles. Advantage: Florida

4. Flustered. Anxious. Careless mistakes. However, with about 10 minutes to go the Seminoles had the opportunity to get back in the game. But, it changed in one play, as articulately stated by one of our readers, Smash!:

down 5, with the ball on the break DeMercy doesn’t pass, but rather keeps it and gets called for the charge. That should have been an automatic 2 pts, potentially 3- and a 2 or 3 point game. Instead, it completely stopped all our momentum and we never got back in it.

The Seminoles defense did what it needed to in order to win this game. This was Florida's worst offensive efficiency of the season. They shot better from the three point line and did a nice job from the floor in general. The Seminoles couldn't make a basket and were rushed and had their worst shooting night of the year. We predicted the Gators to score 68 points and they did. This should be considered a success by the Noles, and pure luck on our estimates. The offense sputtered and couldn't quite climb out of the hole they dug.

At the end of the year, the Seminoles will be a better team than the Gators. This, we hope, is not what we should expect from the Seminoles for the rest of the year. There are number of big tests coming up in the next few days that will determine what kind of team this is. There is no such thing as a good loss. This was a reality check for the Seminoles who got off to a great start. Expect better things in the coming days. This was more of Florida State succumbing to the pressure of the Gators defense and making serious errors than Florida having an outstanding game.