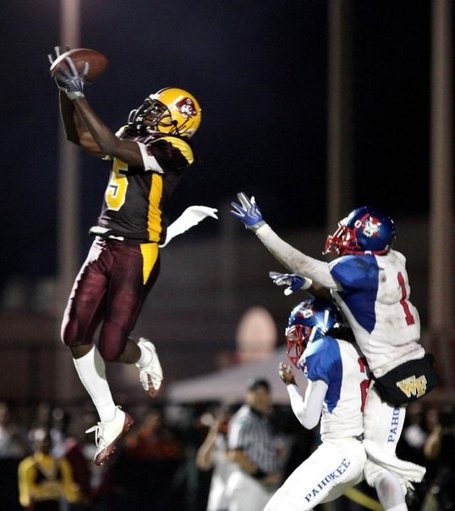 Wow.  What a saga.  Greg visited for almost every home game, and left without an offer.  After visiting for the NC State win, Greg returned home and committed to Miami.  However, once the FSU staff learned of this, they immediately offered Greg a scholarship.  After this offer, most Miami fans expected Dent to switch to FSU.  They were right.

Dent is a talented skilled athlete that is smooth and fluid in space. He is versatile enough to play on either side of the football. Possesses very reliable hands and is impressive when running the sideline routes and is confident when running across the middle. Catches the ball in traffic and is able to make defenders miss in the openfield allowing big play potential. Makes difficult receptions and can reach back across his body to snag the football. A very solid defesive back that has excelent range and closing speed. Attacks the ball carrier downhill when coming up on run support. A sound tackler that wraps up the ball carrier and drives legs on contact. Plays the deep middle safety position instinctively. Breaks quickly on the pass and can cut underneath the receiver to make a play on the ball or go up into the air to high point the pass. Dent has good speed

Greg plays WR, CB, and FS for the Glades Central squad, and will come in as a defensive player. He is much more talented and explosive on the defensive side of the ball.

Dent flew under the radar for a long time for a number of reasons. The first reason is that he only played WR for his sophomore and most of his junior season. However, he was placed on the defensive side of the ball near the end of his junior season and started to shine.  Most considered Dent of one the best players in the Muck Bowl in 2008.

During the summer of 2009, Dent absolutely dominated 7 on 7 tournaments.  Many thought he was the best player on the field in these tournaments; and, instead of getting abused like most DBs do in that type of tournament, Dent shined.  Onlookers reported him to have interceptions in the double digits in some camps.  That is extremely impressive.

He continued to play on both sides this year, and has shined once again. The other reason is that he doesn't camp very often, and when he did it was as a WR. Most people consider him a safety, but I think there is a good chance that he can play CB on the next level. Either way he is a solid player, and he is the cousin of current FSU Commit De'Joshua Johnson.

Also, remember how Muck DBs have fared against FSU.  UF CB Janoris Jenkins begged and begged for an FSU offer, and the 'Noles refused him.  Former Wake Forest CB Alphonso Smith was another begging for an FSU offer, but no such luck.  Smith dominated against FSU and Jenkins is continuing in the same vein.  FSU is smart not to make the same mistake.

These criminally underrated prospects blow up in college.  Once they get in a weight program, look out.  They have the inner drive and toughness to succeed in college, as they play with a chip on their shoulder  most of the time.

I have watched a few of his full games and he has been the best of one of the 2-3 best players on the field against some pretty stout competition.

Some of the competition:


He outplayed or played to the level of each one of those players in that list, with the possible exception of Matt Elam. However, some say Dent was the best player in the Glades Central/Dwyer game.

Here is some video, it is a three game cut from his last junior game and a couple senior games. Keep in mind Competiton this is against Pahokee, Miami Pace, and Miami Central. Watch the ball skills. The Green team is Miami Central with Reese/Godfrey. Watch his nose for the ball.

Greg Dent from SoFLAfootball.com on Vimeo.

We at Tomahawk Nation believe that Dent is best suited to play DB.  We think Dent can end up at 6'0'' 200, while running a 4.5 (4.4 on a good day).  His instincts and ball skills, in our mind, are what make him suited for DB, whether it be corner or safety.  I would put him at corner the first day of practice, and see how he does.  He certainly seems to have the hips for the position.  Time will tell.As a side note many of you know that it has practically been my mission to create an optimal amount of hype surrounding him, get people to talk about him on other Nole websites, tweet about him weekly to James Coley, etc. I am relieved.

Welcome to the Seminole family! 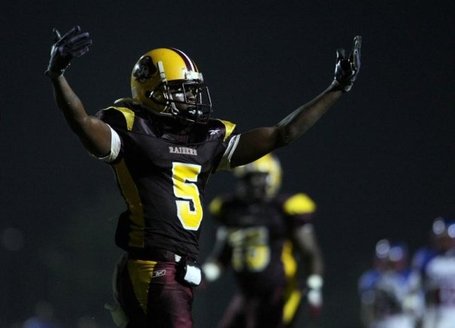