Written by and Credit goes to: Aussierat.

Is Mark Stoops' ability to recruit being judged too early? Some of you are hesitant about the Mark Stoops hire.  I think it's a good move and want to start by discussing the recruiting conditions he faced at .  I'll leave the Xs and Os of his defensive performance to other authors here who are much more qualified to discuss such things.  Hopefully someone will follow this post with metrics demonstrating this.  I want to focus on the difficult area that UA has to recruit and where recruits go, to show why Stoops has had what we would call mediocre recruiting classes and to suggest the numbers his defenses have produced are very good considering what he's working with.

Continued after the jump.

I spent two years at University of Arizona in grad school ('05-'07).  I have a cousin with a son who played high school football in Tucson so some of this comes from conversations with his family as well as articles I read at the time.  I am by no means an expert on AZ football and hope that if I misrepresent something here, a better-informed person can contribute/correct me.

It goes without saying that high school football in the University of Arizona's backyard is much different than in Florida State's, but I want to reiterate the point with some details:

We've discussed the culture they are recruiting from.  Now let's look at the numbers.

I used rivals data to put together the table below.  From left to right, you're looking at the top ranked players coming out of Arizona according to Rivals, the number of these players from Tucson, the number from Tucson that chose UA, and the number of top ranked players that went to the two in-state schools.  From top to bottom you're looking at two time periods, the total from 2004-2009 and the total from 2006-2009, when ratings for all of the state's top prospects were included in the online data, as well as the distribution of player ratings during the 06-09 period.

Clearly this is a very tough area to have a major D-1 football team.  Arizona has less than 10 percent of Florida's talent at 4-star or higher, and despite two in-state schools to split this small player base, their talent is poached by PAC-10 and Big 12 schools.  To compound matters, UA's in-state rivals are situated in the middle of the state's most concentrated group of recruits (Phoenix area) and thus pull roughly double the in-state talent than UA. 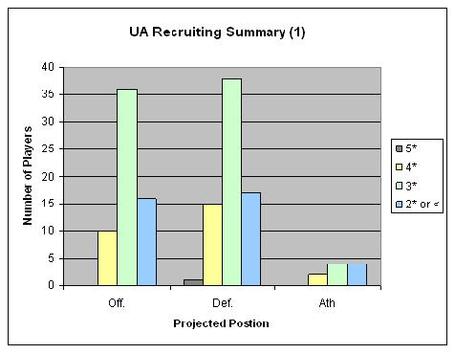 Finally, where do they get players from? Again this includes recruiting classes from 2004 to 2009. 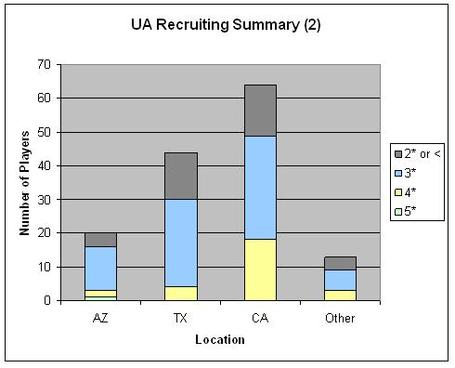 Now let's compare these results to Florida State (you know, for kicks).

The takeaways from this are pretty obvious.  dedicates a lot of its coaches’ time and resources to recruiting other states because there is a limited talent pool and that pool is hard to recruit.  FSU has a huge recruiting base comparatively and gets roughly half of its players (much more last year) from in-state.  Keep in mind the FSU numbers include a big chunk of the lost decade when we got away from our roots and our recruiting tactics were quite bad.

I gave you all of that to lead you to this point:  athletic kids in are often focused on other sports than football.  This leads to few elite football prospects.  To compound matters, few of these elite prospects even stay in state.  Even that handful leans toward ASU over UA.  When the Stoops brothers came to , they came to a very difficult recruiting area/school.  They are not considered bad recruiters.  They are actually doing much better than their predecessors; it is just a very difficult school to recruit for.  The lead author at AZ Desert Storm(link) stated that while Dykes was their recruiting head, the Stoops brothers "were kind of a one two punch on the recruiting trail", and Mark is a big loss for their program. They have to combine what talent they can get locally with attempts to raid the cellar in other states like and where the high school player base is much larger.

Now look at Stoop’s defensive numbers (go to Football Outsiders for this).  I think they are quite good considering the talent he has to work with.