Earlier this season, I argued that Christian Ponder had the potential to be an elite level quarterback based on his first year performance.  I compared his 1'st year numbers to the 1'st year numbers of two widely accepted elite quarterbacks (Colt McCoy '06 and Sam Bradford '07).  Ponder played like a warrior in the first nine games of our season.  He made Seminole Nation so very proud during an otherwise dark chapter in Seminole history.  His dazzling season at the healm of Jimbo Fisher's high octane offense was tragically cut short as he delivered a bone-jarring tackle (with broken ribs) to Clemson's DeAndre McDaniel and suffered a season ending injury.  Ponder was considered by many to be a dark horse in the race to the Heisman.  Based on data from his 2009 performance, I will prove that Christian Ponder is an elite quarterback just as deserving of the title "Best Collegiate Football Player" as the other Heisman candidates.

In this analysis, I compared Ponder's '09 performance to the performance of the 3 Heisman finalist QBs:

Out of curiosity, I included EJ Manuel in there as well (don't read too much into his results, as 3 observations provide little statistical confidence).

The metric I will use to gauge the QB's performance is the ESPN calculated passer rating.  Below is a box plot of these 5 QB's passer ratings: 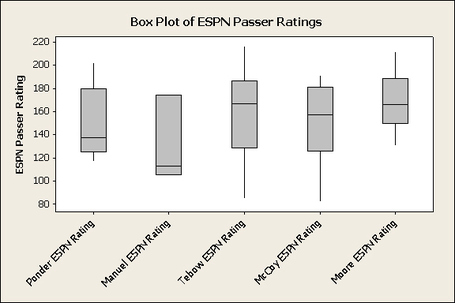 Much more inside.  Continue reading!

On the surface, it appears that Ponder can hang in there with the elite quarterbacks in the country.  His median passer efficiency is slightly lower than the other guys, but his whiskers don't extend as low as Tebow or McCoy.  Generally speaking, his passer efficiencies are comparable to Tebow &  McCoy.   Based entirley on this, it looks like Moore is the best QB in the group.  If I was an expert analyst at ESPN, I'd probably call it quits here and declare "Moore the best QB in country" (maybe this is a good time to state that the views and opinions expressed by the author are his own and do not represent the views and opinions of Tomahawk Nation).

The above analysis doesn't take into account the quality of opponent and doesn't put performance into proper perspective.  It's like saying a kid who got an A in algebra is as smart as a kid who got an A in calculus; both got A's in math.  To put this into proper perspective, let's look at the box plot (below) of the FEI  adjusted defensive efficiencies that these QBs faced throughout the season.  Lower indices represent better defenses. 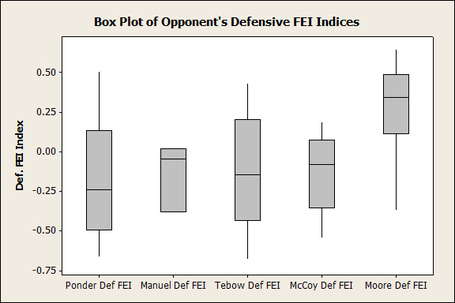 With the exception of Moore, all of the QBs played pretty tough defenses.  Ponder's opponents had defenses with a lower median FEI defensive efficiency than any of the other QBs.  Now the ESPN analyst's claim that "Moore is the best QB in the nation" is starting to look a little shaky.  Moore had the best passer ratings, but he posted those ratings against cupcake teams.  Ponder posted elite passer ratings against a grueling defensive schedule. 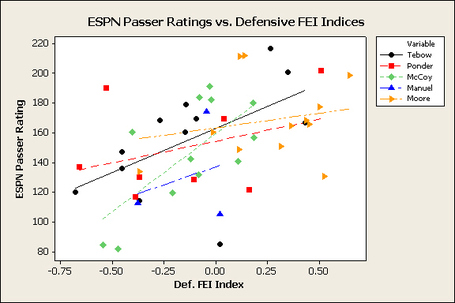 In the above plot, the red-square points represent individual games from Ponder's 2009 season.  In each game, he played a team with a specific Def. FEI index (X-axis) and posted a particular passer rating (Y-axis).  The red trend line is the regression model overlaid on the plot.  The color key shows which points / trend lines correspond to which QB.

Here are the models if you are curious: