Strategy Session: What Florida State can expect from the West Virginia Offense

Share All sharing options for: Strategy Session: What Florida State can expect from the West Virginia Offense

With Bobby Bowden's retirement, the Gator Bowl in Jacksonville Florida made a smart business decision by scooping up Florida State, so that it could sell out its tickets to Seminole fans in a record amount of time. The word had leaked about what they planned to do, and it worked Seminoles were ready to watch Bowden's last game which would be played against his former employer West Virginia University. FSU normally wouldn't have been qualified to play in such a bowl, after having a 6-6 season, but never the less this is where they landed.

So what can Florida State expect to see from WVU when they are on defense? Honestly, the first thing they can expect is a lot of WVU in the endzone, but we knew that because FSU had the 93rd ranked defense in the country this season. We are going to take a look at the players and schemes that make the WVU offense dynamic, and what to look for on January 1 as you root on the Seminoles.

West Virginia lost one of the most impressive college football players of the last decade last year, Pat White. White was the perfect QB for the WVU offense, and set records in theig East for yards and scoring. They replace him with a RS-Sr Jarrett Brown who is 6'4'' 223 and can move very well for his size. He is an inconsistent passer, but has a live arm when he does throw it. The QB is an intricate part of the offensive plan for WVU. In WVU's offense the QB is expected to be both a runner and a passer (which has given DC Mickey Andrews fits), and Jarrett Brown fits the billing. While he isn't Pat White, he is still a threat to run.

WVU has one of the most impressive RBs in the entire country. Famously recruited by FSU and mentored by Deion Sanders Noel Devine wasn't going to get into FSU and chose to go to WVU instead of Hargrave Prep and re-entering the recruiting process. The selection was a good one for him. While he is only 5'8'' 178, Noel is extremely muscular, quick, elusive, and he has excellent vision. He has gained 1297 yards on the ground with a 5.8 yd per carry average and 12 TDs this season, after seasons where he averaged 6.3 yds per running play and 8.6 as a freshman change of pace back.

WVU's offense has been one of the most productive units throughout the last 5 years. Rich Rodriguez brought his style of offense to town and new coach Bill Stewart hasn't changed what they do very much. West Virginia is predominantly a zone-read team. The zone-read concept has been discussed on this site before, as USF runs it a lot and Boston College used it to destroy our defense just a year ago, even though it isn't one of their base offensive concepts. Mickey Andrews defense has never been able to handle this concept.

In WVU's offense the QB is set in the shotgun with 1 RB. The fundamental idea of the zone reads are simple. The OL are in a zone blocking technique (where they are blocking in a "zone" rather than a 1-1 man technique), more about zone blocking is discussed in this excellent article. The quarterback has a "read" or if you like "option" to give the ball to the RB or keep the ball.  Theplay is designed to go frontside (or the direction that the OL is blocking) to the RB, however the backside DE is not blocked in this play. If that backside DE crashes down quickly to go after the RB the QB reads him and pulls the ball backside, keeping it for a run. Here is what the base zone read looks like: 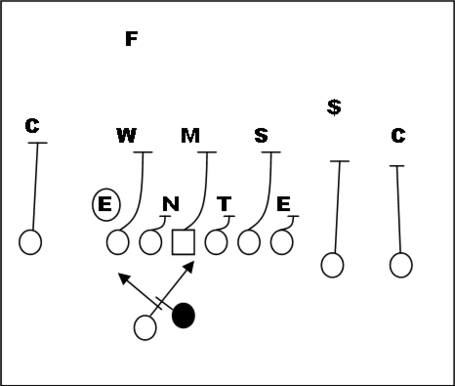 Very similar, here is what it looks like when run as a counter: 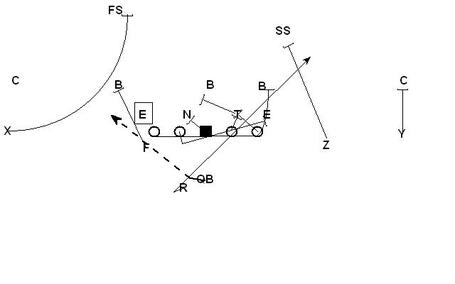 The play designed to go to the frontside, however if the DE crashes it is a legitimate option for the QB to keep the ball, especially with a mobile QB like Brown. FSU's Defensive Ends notoriously play undisciplined football, which led to USF's freshamn QB B.J. Daniels continuing to pull the ball and run on the zone read plays. A couple notes to watch for are the difference between their version of Inside Zone and most inside zone schemes is they want their uncovered linemen to go straight to the 2nd level, and watch the playside tackle, as his relationship with the defender is really important because he is almost always 1-on-1.

However, as with any scheme defenses began to adjust. Defenses began to always crash the defensive end, and they would roll the OLB to the backside to take the QB when and if he pulled the ball down to run. This technique is called a "scrape exchange" or more commonly just a "scrape." I would expect that FSU will use Will LB Nigel Bradham to scrape against WVU quite a bit as Jarrett Brown continues to pull the ball down and run with it. He is the best tackler on the team and has shown that in space he can handle these types of situations.

However, this is where West Virginia under Rich Rodriguez was an innovater (and Urban Meyer at Utah). It was very early in the spread zone read era when a third option was put into the play. There are two different versions of an option. The first is for the playside slot receiver (Y in the photo) to not block but actually establish a pitchback relationship with the QB. The other which really confuses the "scrape backer" is a bubble screen option to the backside. West Virginia has playmakers like Jock Sanders in the slot, and with the current coaching on FSU's defense I will assume that both of these wrinkles will give FSU fits all game. Maryland used the backside WR screen against FSU over and over and it continued to work for the entirety of the game. While the triple option is different from Paul Johnson's at Georgia Tech, the triple option from this look is difficult defend and FSU will struggle against that as well.

Rather than continue to talk about this, I will let the master himself identify exactly what they are trying to do with their options out of the spread look. While there isn't anything revolutionary in this video, Rich Rod does a good job of talking about exactly what the WVU offense is trying to do.

West Virginia runs some traditional spread passing and running plays (which have been discussed here in respects to Jimbo's offense and FSU's opponents) that are not predicated on the zone-read concept, however most of their offense is. Many of their downfield passing plays start with a play action to the inside zone back (usually Noel Devine)

Here is video of WVU running the triple option look out of the gun:

There is one last wrinkle to the zone-read spread that I also expect in the game from WVU. As the scrape exchange has helped defenses defend the backside, and defenses are staying at home more and more frequently against these plays because they know what to expect, some spread teams have moved to blocking the end and reading the DT from the backside. Instead of running outside, the QB will read the tackle and run inside very similar to the way that the traditional read of the DE is executed. With the amount of time WVU has to implement a game plan, and the video of how undisciplined we play along the front 4 I would expect to see this run a few times as well. From Chris at smartfootball.com:

This does a couple things for you. One, it can confuse the "scrape exchange" response, where the defensive end crashes to force a "pull" read by the quarterback while the linebacker loops outside for him, because the defensive end gets blocked and the QB should have a big gap inside. And, second, it gives you flexibility in who you choose to block versus read. As the old saying goes, if you can’t block them, read them.

West Virginia had the 41st ranked offense (via footballoutsiders FEI rankings) in the country this year, while that isn't extremely high, they run a lot of the concepts that has given Florida State fits, especially making FSU defend 11 players by giving the QB the option to run quite often. They have a dynamic RB who has been running in a zone scheme for 3 years as well. I would expect the FSU defense to struggle mightily against WVU in this bowl contest. Florida State will have to score quite often to have a chance to win this game.