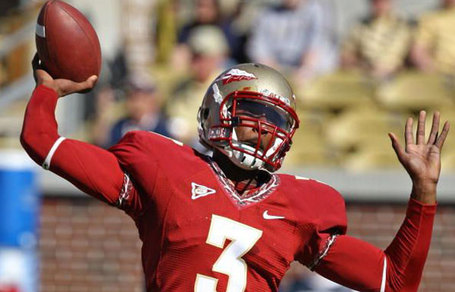 The sun finally popped through the clouds Monday morning at Jacksonville University as Florida State held its third practice in preparation for the Jan. 1, 2010 Gator Bowl meeting with West Virginia.

In their final full-pads practice before Friday's sold out game, the Seminoles worked for 19 periods. Practice culminated with a five-minute period of scrimmaging from the 10-yard line, followed by a five-minute goal line period.

Florida State redshirt freshman quarterback EJ Manuel, who will make his fourth consecutive start against the Mountaineers, was the topic of discussion in the 20-minute interview session prior to the start of practice. Manuel has led the Seminoles to a 2-1 record since replacing Christian Ponder, the Atlantic Coast Conference leader in passing and total offense, who suffered a season-ending shoulder injury against Clemson.

Offensive coordinator Jimbo Fisher has been largely pleased with Manuel's performance and growth over that stretch and hopes that the additional 15 days of bowl preparation will serve the Virginia Beach, Va., native well against West Virginia.

"You never know what you have until you go out there and have success," said Fisher. "Then you say, `You know, I can do this.' Then the confidence grows and grows. He had two great games to get us into this bowl. He played great at Wake (Forest), had a couple mistakes against Maryland - a few that were not his fault, others that were. He then battled back and led us to a two-minute drive. That kind of experience is invaluable. We had a tough situation at Florida ... but he played well in the second half.

"I think his growth each week and the situations he's been in has helped him progress along the way. You can only get it by being out there and I think he handled it well. He realizes now that he can play this game. He knows how to play it and now its just time for him to be consistent and play on a down-in, down-out basis."

Though Manuel is a dangerous runner, not unlike West Virginia quarterback Jerrod Brown, he prefers to stand tall in the pocket and access all of his weapons.

"I can run if I have to," said Manuel. "I would rather sit in the pocket and let my receivers, running backs and tight ends do the job of running with the ball. But if the pocket breaks down, I can get out of there."

Learning when to escape the pocket and make plays on his own, or stand in and deliver the ball at the last second, is part of the learning process. Fisher sees Manuel making those strides - "knowing where you're going and why you're going" - with every practice.

"The big thing for him is understanding why he is doing what he is doing," Fisher said. "Finding the extra meaning behind why is so important. Coming out here is kind of like having another spring (practice). No matter how you look at this - sure it's a bowl game and you want to win - but for those (young) kids' development and growth and to where they are going, it's a whole another spring they get. So you get to ask them the why? Why do you do this? Why do you do that? The more they understand why than they can become better players."

Some selected quotes from the media session prior to the start of Monday's Gator Bowl practice:

On what scares him the most about playing West Virginia: "Well, the thing that scares me the most is West Virginia's ability to come up with the big play. That has been our nemesis all year. We will play pretty good defense then all of a sudden 65 yards, 55 yards, 100 yards, that is really what has happened to us all year. We have probably given up more big plays this year then I can ever remember. Now, if they didn't have a big play man on their team I wouldn't worry that much about it. But they got a guy that can strike; I mean he can kill you with one play. They got a couple of them, but that is probably my biggest concern right there. Other than that, it is probably a pretty good match-up."

"Practice has been pretty much the same as it was at school, hard. They haven't been slacking on us. They are making us go just as hard as if we were at school. The weather has been the hardest part, in my opinion. It's really cold."

"I think everybody is headed in the right direction. Everybody's focused and trying to get the big win not only for ourselves and our team but for Tallahassee and Coach Bowden, especially."

"Coach has a lot going with this game and he feels that we should beat this team and if we prepare the right way, there's no reason we shouldn't. Pretty much, we just need to know who we're playing against - that they have a speedy running back, a shifty quarterback that can run and can throw the ball. Basically we need to know their personnel."

"Of course, I'm very excited for the game and happy to be in Florida still. Being from Florida, my whole family can come. Playing in Jacksonville, it's a nice place to play. I like the fact that we are in the Gator Bowl."

How important is bowl practice for your continued development? "It's really important, because it's getting me ready for next year for me to come in and try to get a lot more playing time. It helps the team see where we're going to be next year at the beginning of the season. If we win this game, there's a good chance we'll have a good season next year."

How much has your confidence grown by getting more playing time down the stretch in the regular season? "I'm a lot more confident now since I know the offense. I'm still learning. At first it was real hard. I was used to playing and I wasn't playing. Now that I'm playing a little bit, I've still got to keep working hard to get ready for next year."

After finishing the season strong, so you concern yourself with getting back to the same level with a month off before the bowl game? "Yeah, you worry. That's where practice comes in. I remember the first week we came back out here, I was rusty, real rusty. But everybody was. You've pretty much got to bet back in the groove of football. When you take a little break from it you lose a mechanics and technique that you've got to start working on. You've just got to get that focus by coming back out here and working hard."

Where are you now in terms of getting back to top form after a couple weeks of bowl practice? "I feel pretty good now. If you had asked me that the first week, I would have said I have a long ways to go, but I feel real good right now. I feel regenerated, like we just started two-a-days. You're real motivated for the game."

"It seems like it's more hard work than fun right now. Jimbo always says there's a time to play and a time to work so it's basically turning that switch on and off at the right time."

What's it going to take to beat West Virginia? "We just need to focus and be consistent and we can't shoot ourselves in the foot with penalties and things like that. Winning - I think everybody on the team has that in mind. I know a win would give us momentum going into next year. We just want to leave this season with a good taste in our mouth."