Share All sharing options for: Scouting Notebook: Under Armour All-America Practice Day 1 Notebook of Florida State Recruits, and other observations.

[Photos added to the bottom of the story] Today is the first day of the Under Armour All-America game practices at Wide World of Sports in Orlando, FL. The practices will take place today, tomorrow, and Friday and will be broadcast on ESPNU. The game will be played on Saturday at 11 A.M. on ESPN. I will be providing coverage from the practices the next two days as well as the game, focusing on the 5 players that are connected to Florida State as a target or current commit. The first installment is my "scouting observations" from day one. Part two later today will include interviews with LaMarcus Joyner and Christian Jones. Part three will be a transcribed Q and A with Corey Lemonier tomorrow, and another scouting notebook tommorrow night after I drive back to Tallahassee.

The first thing you notice about Joyner are his freakish measurables. His arms hang extremely low, however he is still built throughout his entire upper half. While he is on the short side, in no way does it look like he doesn't belong on the same field as the other DBs. Joyner has been designated to play CB in this game which is exciting, because he has primarily played safety the past two years. I have been one to say that I thought he would end up at safety because of his raw hitting ability.

In agility drills Joyner showed his quick burst from his lower half and excellent hip fluidity. He looked like an elite prospect in these areas. Joyner struggled mightily to hold on to the ball the entire day. Many of the drills revolve around making breaks and then receiving the ball at the end. He was coached on how to catch the ball a few times, and he also muffed on kick when he was back working as a punt returner. However in each drill he completed them smoothly and quickly showing the type of body movements that make him an elite prospect.

In one on ones Joyner really showed what he could do. Regularly Joyner jammed and stayed with each receiver that he lined up with. The big thing that he does well is that anytime a receiver might have a step on him he is able to recover and transition. Any half step wrong and his athleticism puts him right back in position. Kadron Boone (Texas Tech) and Antonio Goodwin were blanketed in one on ones. The only time he was beat in one-on-ones was when Kenny Shaw made a beautiful cut to free himself. Again in the team portion Joyner looked great, even though he was only thrown at twice, neitehr was completed. Once he made the biggest WR there (Brandon Coleman) go up high for a ball and was able to knock it away as Rogers fell.

- Joyner came on during warmups doing the chop

- Chris Dunkley and his highly anticipated matchup didn't happen because Dunkley pulled up with a hamstring injury and was unable to compete the rest of the day.

My first thought when I saw Christian Jones up close was "wow that kid is huge", for a LB he is just incredibly impressive physically. There were two players on the White (Blur) team that everyone looked at and thought were ready to step onto a college field and play tomorrow. Christian Jones and Da'Rick Rogers. In agility drills he showed that he is capable of moving his great frame. I believe more than ever that he can play OLB and play it well after watching him go through drills.

However, Christian really shined in 7on 7s and the team portion of the practices. 5* RB Michael Dyer is a freight train going through the hole, however on one particular play CJ met him about 2 yeards off the line of scrimmage and quickly took him to the ground with a big hit. not 30 minutes earlier he was out in space playing the pass and was able to read the ball off the QBs hands and make a near interception. He was impressive all day. I expect that if he is able to perform like this the next two days he will have no problem moving into the 5* status on everyones board.

Jeff was very hard to evaluate today. We've written about his physical presence before, and he is extremely impressive physically. In drills he didn't fly through them the way that Jones did. When they all lined up he was making calls, directing traffic and looked like a natural leader on defense. Luc is clearly a Mike LB, as he is very compact and his brute strenth from his arms allow him to wrap up and carry blockers and runners backwards.

In the one on one hitting drills he repeatedly knocked the other LBs backwards. However this is Lucs strength. In 7 on 7s and the team portion of practice he wasn't able to shine at all. Most of the plays were run away from him, he looked slightly apprehensive in pursuit and didn't have any really great hits. In coverage he was passable. Many knock his stiffness, and while he did show that he isn't a candidate to be matched up one on one with CJ Spiller any time soon, he can be good enough in pass coverage to make his strenths a plus for the team. I hope that tomorrow he is able to be more active, and that drills allow him to participate more.

Shaw was just added to the Under Armour All America game in the last week, as he was going through some injury problems to his groin. He's actually not in the media guide and many didn't know who he was at first. As far as his physical form, there is much to be desired we know that he is a lean, wiry kid. This is probably the reason that he came into the year as a 3* WR out of Dr. Phillips High School. He had a fantastic senior season and has shot up the rankings.

In the initial warm up drills Shaw looked extremely smooth, looking over each shoulder with similar ease and catching the ball with one or two hands without a problem. If there is a WR in the country who gets out if his initial break better than Shaw I'd like to see him. In 1 on 1s it was the kenny Shaw show. Every time he lined up, and I counted 6 times, he found himself open. He ran hitches, outs, posts, and go routes. Each time he was able to get open. The reason? This kid runs absolutely elite routes. He is smooth in and out of every break, uses his head to get CBs to lean, and has excellent feet to stop on a dime. By the end of drill there was a buzz with on lookers and some of the junior combine participants about how well he was playing. The biggest receipient of Shaw's moves was Georgia Tech commit Ryan Ayers who struggled all day.

- He also said that he is excited to end the process on January 2 at the game, and it has kind of become a "heart ache". I can tell he is ready to announce.

I have to be honest the player I was most excited to see play this week is Corey Lemonier. Luc and Joyner are committed, Shaw and Jones seem to be heavy leans, but Lemonier's recruitment is still in the air. I was excited to see a top 5 player in the state at a position of need (Defensive End) play. In defensive line drills you could see that Corey is extremely competiitive, he blew past his fello DL who tried to block him at the end of the high knees, yet he worked hard to try and block him. Corey is a little small to play college right away. I don't mean short, he towers over me easily at 6'4'', but for a DE you notice that he was slight of build. He needs to add some weight as he is only about 230 lbs. That didn't stop him from putting on a great performance.

In the 1on1 drills with the OL it got very competitive and scrappy. Corey put on a show when he was matched up with Chaz Green of Tampa Catholic. Corey used his hands extremely well and was able to keep Chaz off of him getting to the QB the first time. The next time Lemonier dropped his right shoulder and did an outside speed rush. He was able to get under Chaz's pad level and turn upfield and get to the QB once again. In the team portion of the practice Lemonier was hit and miss. He was able to record a sack in one situation. However, it did become clear that he has some work to do when he isn't able to get up the field outside. He has a good arsenal of moves that need to be tweaked, and adding weight will allow guys like Ja'waun James from turning him inside with brute strength at the next level.

- Auburn is getting a great one in Michael Dyer( RB ,Little Rock, AR). He had a good day, he put a big hit on Tennessee commit Michael Taylor (LB, Atlanta, GA) but Taylor was able to drag him down. Dyer then continued to scream "you better bring some help next time" over and over to Taylor as he left the field.

-UGA commit Alec Ogletree (S, Newnan, GA) also had a very nice day in the team portion of practice. He pursues very well to the ball and wraps up. He is also very impressive physically.

- Karlos Williams was on the sideline watching practice and wearing FSU workout shirt and shorts.

- Myron Rolle, who works out with Tom Shaw at Wide World of Sports was there and talked with many of the young children on the sideline for an extended amount of time.

-Da'Rick Rogers (WR, Douglasville, GA) was the most impressive prospect on this day between size, speed, and route running.

- Todd Chandler (DT, Miami, FL)flashed an extremely good get off of the line. 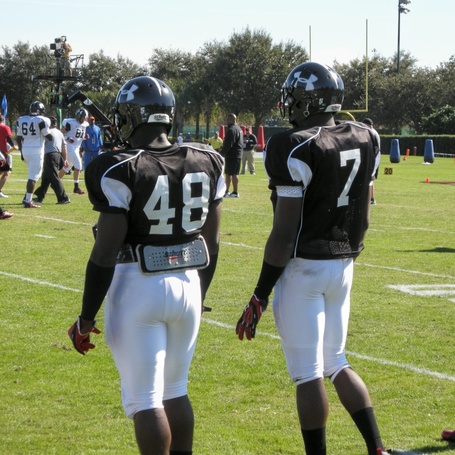 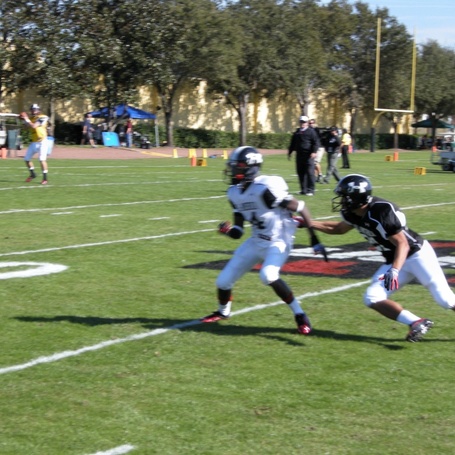 Kenny Shaw seperates from a CB in drills 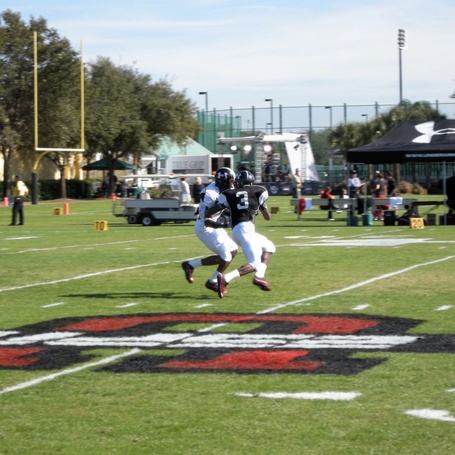 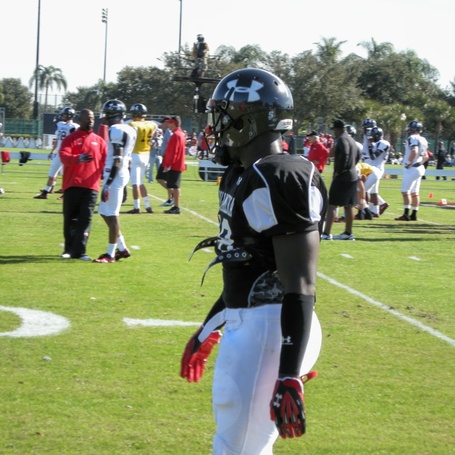 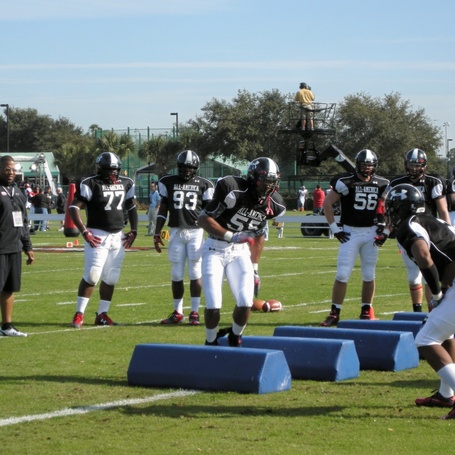 Corey Lemonier goes through a drill 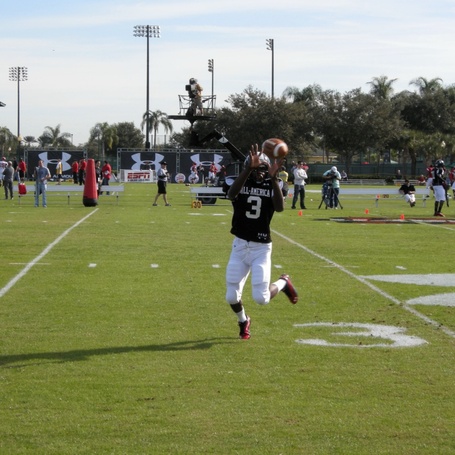 LaMarcus Joyner eyes a pick in the DB drills 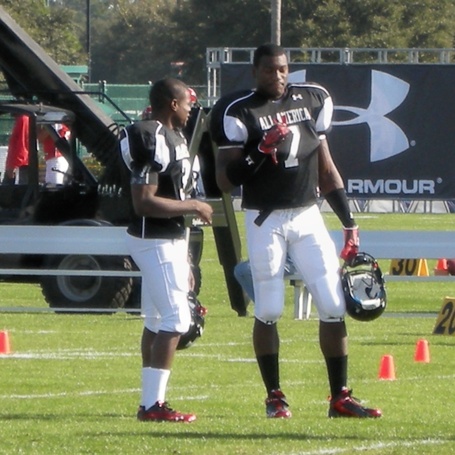 Joyner and Jones chat it up as the second unit gets some work. 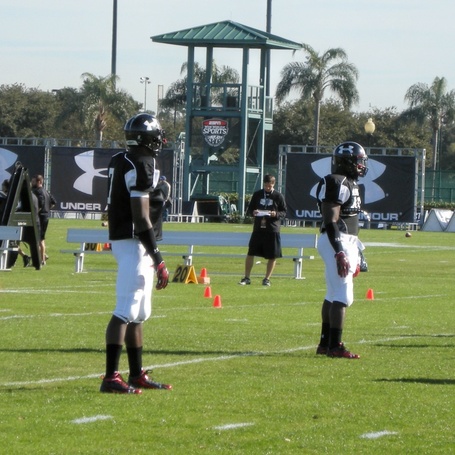 Jones and Luc line up before a snap 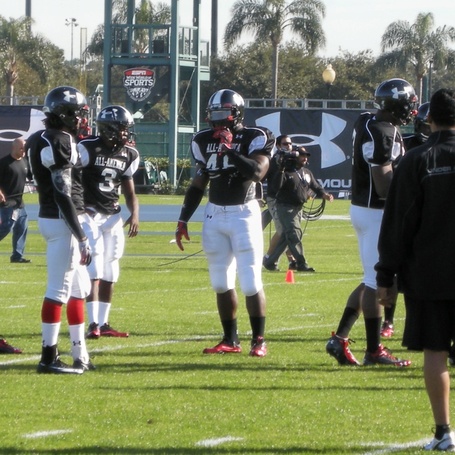 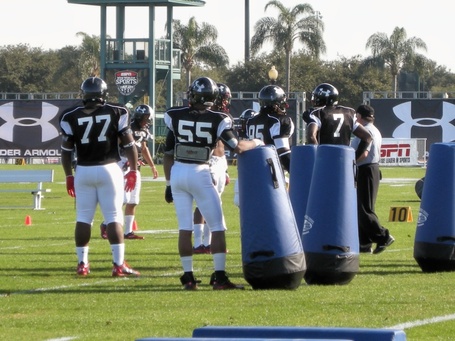 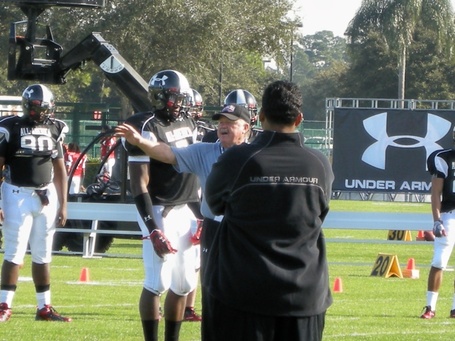 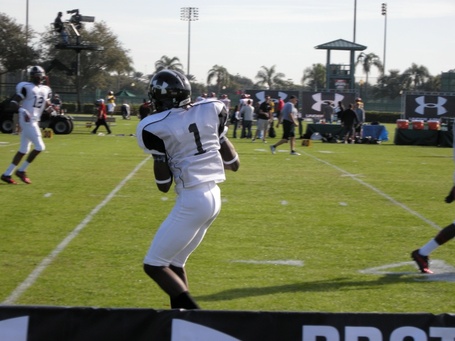 Chris Dunkley will choose between UF, Bama, and UGA January 2nd, he had a hamstring injury that held him up today. 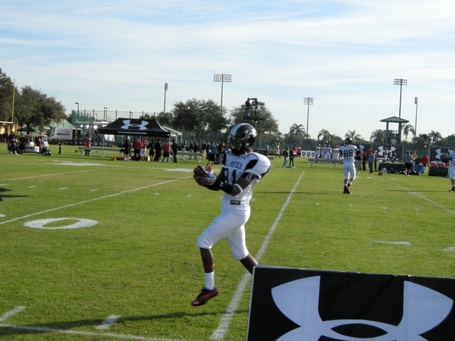 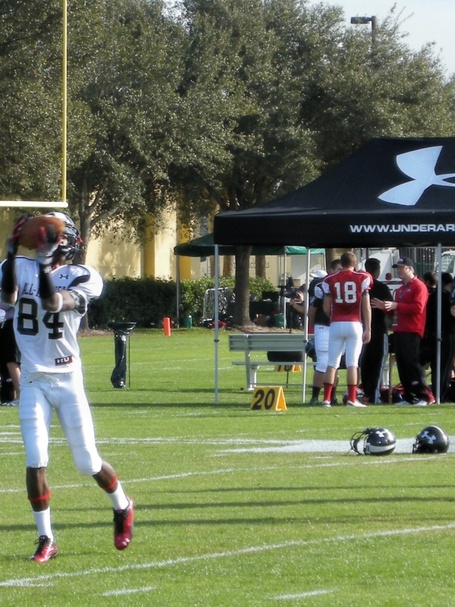