Is anyone doubting the recruiting ability of Jimbo Fisher and James Coley now?  Elam, Tomahawk Nation's #2 prospect in Florida, had been committed to the Gators since October 8, 2008, but had reconsidered when the Meyer news broke on December 26th.  He still plans to enroll early.

In addition to his UF, Elam had other offers from OSU, FSU, Miami, UGA, Alabama, Tennessee, LSU, ND, and USC.  Pretty much everyone and their mother had offered Elam a scholarship.

[unrelated note: remember that there is a basketball game tonight] 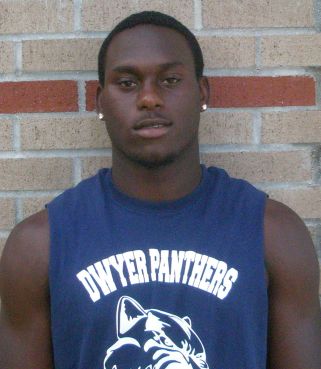 Inside - Scouting Reports, Video, and more on this huge commitment!

He had an extremely close relationship with UF coach Urban Meyer (who recruited his brother and taught Matt a WR stance when he was 9). Meyer was the main reason Elam committed to Florida.  Elam took all five of his visits (Tennessee, WVU, FSU, UF, UGA). He visited FSU for the NC State game on October 31st and supposedly liked FSU better than UF.  If Meyer had not retired/taken a leave of absence, Elam would have enrolled early at Florida.  I credit Jimbo Fisher and James Coley for recruiting Elam very hard for the last couple of months.  Therefore, the 'Noles were in great position when the Meyer news broke.

His brother, Abram, plays for the Cleveland Browns.  There were some rumors that Matt was going to move to Ohio for his senior season.  Those turned out to be false.  Both of the Elam brothers have battled through extreme adversity to become outstanding football players.

His story begins with death.

The first time the name of one of the best high school football players in South Florida appeared in a newspaper article it was in the obituary section.

As a survivor. To an older, murdered 12-year-old sister who was his closest friend.

"She leaves to cherish memories..." the sentence began, going on to list among Christina Elam's three sisters and five brothers, Matthew Elam.

But Matt Elam's story does not end with death. If anything, Elam, a junior at Dwyer High School, springs from it vibrantly, with life, with a sweetness and honesty that defies the expectations for a boy who has been far too acquainted with lives cut short.

There is pain behind the chocolate eyes with the long, thick lashes that blink tearlessly when he recounts the tragic details of his sister's death. But the rage doesn't control him in the way it did when his elementary school principal called his mother to warn that her boy was a "bully" to other students.

Instead, Elam has found a way to harness the pain as fuel and energy on the football field. Tonight, it's Fort Pierce Westwood's turn to try to slow down the 6-foot-1, 205-pound safety/running back/receiver who has led the Panthers into the Class 4A regional semifinals.

Elam, who already has made a verbal commitment to play for Urban Meyer's Florida Gators, has caught 28 passes for 639 yards and scored 11 touchdowns this season.

He makes it look easy. But it certainly hasn't always been that way, especially away from the game.

"I used to be out of hand ... crazy," Elam said one afternoon this week before practice.

In January 1999 Elam, then 8 years old, was sitting at the kitchen table doing homework with his brother, Abram, when a friend burst through the front door of their Riviera Beach home and said their sister Christina had been shot at the playground. Two other girls had gotten into an argument. One had gone home to get her older brother. He came with a gun. When the shooting was done, Christina had been hit with a stray bullet.

Abram and Matt sprinted out of the house before their mother, Addie Lewis, could stop them.

In the aftermath, Matt couldn't handle his anger. He became confrontational, never hesitating to get into the face of another kid. When he was accidentally kicked during a gym-class soccer game, he went after the other boy and was called to the principal's office.

The memory of his sister laying in the park, the sister who doted over her baby brother like a miniature version of their mother, was too fresh.

"I really couldn't live with that," Elam said. "I just wanted to go out and hurt someone, retaliate, make them feel my pain."

Lewis, looking for a fresh start for her son, moved him to a new school. She brought him and his siblings to church on Sundays, and Matt listened as the congregation prayed for them. She also took Matt to anger management classes, where he was encouraged to talk about what was burning inside.

"I can't take any credit for Matt's doing, because we have really struggled through those years," Addie said. "If we didn't trust in God, I don't know where we'd be."

Slowly, the healing progressed. Now, Matt Elam, once a scowling, simmering little boy, smiles shyly and speaks with the peace of a clearing sky after a thunderstorm.

This year, Elam changed his number from lucky 7 to 22, the number Christina wore when she ran track. Before each game, he points to the heavens and whispers prayers from beneath his helmet.

Despite scholarship offers from around the country, he plans to play for Meyer, who was an assistant coach at Notre Dame when Abram played for the Irish after graduating from Cardinal Newman.

Abram, 27, is a source of inspiration for his younger brother, but even his rise to the NFL was not without a dark moment. Abram, now a safety with the New York Jets, was expelled from Notre Dame after being convicted of sexual battery. He was the only one of four players not charged with rape in the incident, and his 18-month sentence was suspended in lieu of two years probation and 200 hours of community service.

Abram eventually finished his college career at Kent State, was signed as a free agent by the Dolphins, but was cut by Miami and later by Dallas before landing with the Jets.

His message to Matt is simple and clear.

"Be better than me. Play football, go to school and let that be your life," Matt says his brother often tells him.

Abram insists that Matt learn from his older brother's mistakes.

"I try to relay the shortcomings that I have, to give him the wisdom that he doesn't have to make the same choices I did," Abram said. "You're going to face adversity, but life is all about how you persevere."

Matt handled more hardship last May when his older brother, Donald II, was shot and killed. Donald led a troubled life - he once was the youngest person ever indicted for murder in Palm Beach County (age 14), though he was later acquitted. Before his death, he had just been released from a 10-year prison sentence for drug and attempted murder charges.

"I felt like I didn't know him, that I didn't show him enough love and I really missed out," Matt said.

For now, Elam is focused on making a run at the state championship.

Two years from now, if all goes as planned, Matt Elam will be playing for the Gators - and his mother will be there for every up and down. She's planning to sell her house and move to Gainesville with her son.

If there were ever reasons to fall, to fail, Elam has had them. But he also has reasons to succeed.

I wonder if he is mentally tough.

Elam has been a hot name on the fertile South Florida football scene since he was an underclassmen.

In my mind, Elam's best asset is his great closing speed.  Literally, you could be watching a film and wonder who that blur going after the football on the screen is.  He has awesome instincts and football IQ.  While some think that Elam looks more natural with the ball in his hands, I disagree.  He brings you power, speed, and range from the safety spot.  I would not like to see Elam's closing speed wasted at RB.  He has everything you want in a safety prospect, and he could probably be a good runningback on the next level.  Elam looks outstanding whether it be a combine, 7 on 7, or a game.  He is the true definition of a football player.

CB Terrence Mitchell will probably be added to the DB class by NSD.

This is also a blow to the Florida Gators.   Elam was probably their best recruit. This makes two years in a row that FSU has stolen UF's best DB commit (and we all know how Greg Reid turned out).   There is a chance that FSU could pull www.elitescoutingservices.com's top six players in the state (not in order: Elam, Joyner, Luc, Jones, Green, and Elam).  Lemonier is the only one in doubt, and the 'Noles have a great shot at him.