That’s right 'Nole fans, the Seminoles have officially landed one of the best players in the country, with the news that MLB Jeff Luc has become a Seminole. Jeff is an elite prospect, which is fueled even more so by the fact that he is so physically advanced for his age. He is ready to step into a program, be coached on the scheme, and run down hill so he can nail some ACC Running Backs. Oh, and hit he can. There isn’t a player in the country that can lower the boom like Jeff can. The recruiting persistence of James Coley was the driving force behind landing Luc, and it is an important commitment that both fills a need in Florida State’s class, and also raises the talent level on the defense.

Behind the jump we will talk about scouting of his strengths and weakness, his recruiting adventure, and add free video!

Jeff’s recruitment has been a roller coaster ride if there ever was one, early in the process Jeff stated that if Florida State had offered early he would have committed to FSU on the spot. However, FSU’s lame duck LB coach thought that Jeff was too big to play LB at FSU, and that he would end up at Defensive End somewhere. However, in reality Jeff is built extremely well for his age, a physique that many have compared to Patrick Willis, and he is the perfect size to play Mike LB. Jeff stated that he would be an early enrollee, so his recruitment sped up extremely fast. FSU, UF, UM, and Tennessee all had to feel good about their chances at one point or another in the process. He was rumored to have silently committed to UF and FSU at different points this fall. Eventually, the Seminoles won out because of the stellar pursuit of James Coley who was steady on Jeff Luc, watching his games anytime he could get down to that part of the state over various other recruits. He knew what he wanted and he got it.

Jeff started the season as a 5* recruit, in the top 10 nationally, and considered by many the best LB in the country. Some people, as with happens with elite recruits, wanted to nitpick with him and pointed to a lack of fluidity (stiff hips in coverage). If you watch him play TE you can see more of the hip fluidity, but he really isn’t asked to do much coverage at Treasure Coast so it is harder to evaluate that part of his game. That, coupled with a 4* type senior season, account for the drop in his national Rivals ratings. However ESPN stayed steady in their evaluation that he is a top 15 player in the country. Make no mistake though, this is a huge get for Florida State, and he is still a great player. Part of what makes him that way is the fact that he is physically ready to play. LB is a serious depth problem at FSU. Kendall Smith played the entire year at Mike (poorly), and Vince Williams sat the year with an injury. Despite many people’s cries for Nigel Bradham to move to Mike LB, he has remained at Sam. The fact is that Jeff offers immediate depth, and our DC can get him into favorable matchups where he is reading things in front of him, going downhill, and tackling in space which are things that he excels at.

Luc is incredibly physically advanced for his age, literally has prototypical Mike LB size, or close to it already. He is very built, and compact. While he is not the tallest guy he still has very long arms which help make up that difference. One thing you will notice when watching him play is that he has a nose for the football, he is always around the play; often ending it himself. In run support he rarely gets turned away due to his elite strength, and he scrapes well with blockers/trash in the area. He does have hips that are on the stiff side, he is at his best when running down hill or side to side in a straight line. He doesn't have the upside of a lot of 5* LB from past classes due to some of the flaws. What is surprising if you just see pictures of him is how athletic he is, playing TE in high school he has shown it, but he is truly athletic on defense as well. He could play at a lot of schools right now.

Here is some free video on Luc: 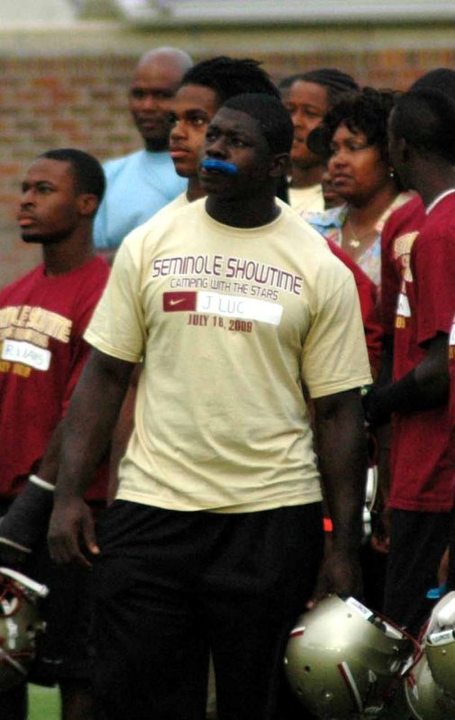