Tomahawk Nation's top prospect in the Sunshine State has committed to the 'Noles.  Lamarcus' mentor (genron187) posts here, so congratulate him as well.

Most people considered Joyner a heavy FSU lean.  His brother got him interested in the 'Noles, so we have that connection.  The facebook status of his mentor recently read "Joyner's mentor's facebook status after the visit: Just had Jimbo Fisher head of FSU in my crib with coach Odell and Cooley. Had a great time. I think I see a tomahawk chop in my future..." Joyner made visits to FSU in April, July, and November (official).  He loved all three.  Joyner took visits to OSU and Notre Dame, while visiting Florida and Miami a couple of times.

For about two weeks now, everybody had expected Joyner to commit.  But the announcement that came via instant messenger, text, and phone calls...  college football fans felt this commitment.  It prompted an internet explosion.  A radio station here in Alabama reported the news.  As for who hit "submit" first, Hear that "Fish" at Noledigest.com broke it by about 2 minutes and some odd seconds on their message board..  No doubt that FSU did everything in it's power to get the word out.  Even spots that don't cover recruiting had it within 5 minutes.  Warchant.com's Chris Nee Caught up with the elusive Lamarcus($ub required).

After not giving many interviews and playing the recruiting game extremely well, Joyner gave the above interview, and also said this to ESPN affiliate Web site NoleInsider.com ($):

"I just believe personally that Florida State is back. It's always been my dream school. Things were going downhill in the program, but guys like Bobby Bowden and Mickey Andrews were the reason that I liked Florida State. I believe in Jimbo Fisher and the things they've got going on. I am a player that can go anywhere and adapt to different situations, but I just felt at home there."

Joyner apparently wanted to tell the Ohio State coaches in person as the Buckeye's head coach Jim Tressel was reportedly visiting Joyner tonight.  That's a classy move by Joyner, and OSU put up one helluva fight.  And yes, this means that he was so convinced that it was FSU that he didn't even care to sleep on his decision.  To commit to your #1 school with your #2 school in your living room with their head coach and four assistants on the same day?  Also, it is nine degrees in Columbus, OH tonight and 83 in Miami.  To deny Ohio State's coaches the chance at their SoFla vacation would be cruel.

Some senior highlights above

Wow.  That's all that can be said.

This is from one game in his JR season:

As far as his position goes, Lamarcus plays free safety and wide receiver for STA.  He has played safety most of his high school career.  Lamarcus has been dominating the great competition at STA.  He was the best player on the field during the Byrnes matchup, which featured over 30 DI prospects.  Urban Meyer was seen on the sidelines trying to catch Joyner's attention.

At Florida's Friday Night Lights camp, Joyner was far and away the best corner.  Urban was on him the whole time, giving personal attention.

Report from a Buckeye in attendance:

Lamarcus Joyner--I was expecting to be good...but I was shocked at his skills. Bill Greene posted my text to him from FNL after I watched a few reps...can't post that here because of recruiting forum rules, but I was fired up. The kids hips are like a swivel but the pads never raise. He explodes out of every cut and glides like he is on waterskiis. Played every rep in straight press technique...no cushion at all. He is the most impressive HS DB I've personally witnessed and he the potential to be a great one. His battles with Chris Dunkley were amazing...and the handsprings and full-extension backflips would make Ozzie Smith proud. Bill Greene asked me if 6-star was a proper nickname...I told him 6 is too low.

CaStauch basically summed up our thoughts with this scouting report:

I consider Lamarcus Joyner to be the most complete Defensive Back prospect I've seen since I started following recruiting in 2005 (I know that's not saying much). That's to say, that he as a unique collection of abilities and talents that enable him to either be considered a top shelf Boundary Cornerback, Field Cornerback, Strong or Free Safety.

As an FCB, he has the lateral quickness, hip flexibility, repeatable acceleration (burst and recovery speed), ability to tame a receiver to his hip (make him heel), straight line speed, ball skills to track the greater range of routes an FCB faces, and intuition in reading the play (all backside players, be it a Will or FCB, need a greater natural feel since the play usually isn't dictated in their direction).

As a BCB, he has the physical tenacity needed to press and work within the shorter time frames and spaces (more bodies and congestion), the polished technique in initial engagement and sustained engagement (body placement, hand placement, "training the WR"), and ball skills.

Joyner is extremely extremely fast and will probably be the best kick returner on the team.  His short-area explosivness is unreal.

It really says something about your skills when you could be an All American at all four secondary positions.  I am unsure where I want Joyner to play.  On one hand, game changers are harder to find at corner.  Potentially at safety, Joyner has enough coverage ability to man up or cover zones, with the hips to turn and run.  He can use his speed and instincts to cut down angles, and pursue against the run with success.  He's a big enough hitter to make it work.  If Joyner plays FS, he is rangy and electric enough to "follow the ball" with ease.  Joyner is an experienced blitzer, having played LB his sophomore year of high school. 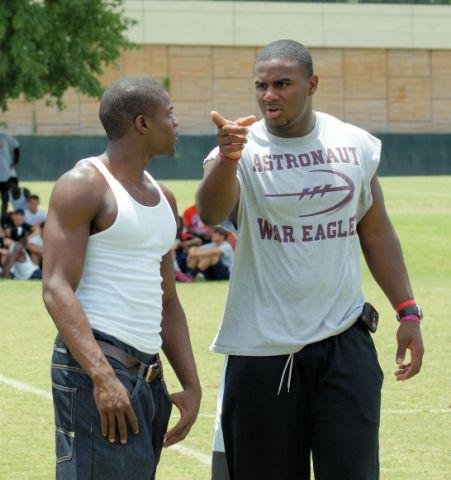 I want Joyner to play cornerback at FSU.  However, when he gets here, I want him to start out as a Greg Reid-esque nickelback.  You know, where he can take advantage of his freelancing ability and instincts while he learns the position.  That way FSU can have his insane talent on the field and have him learn at the same time.  FSU could also experiment with a hybrid DB concept.  For example, Joyner could play CB on first and second down, and then switch to a safety sport for third.  However, the time taken crosstraining him might prevent him from learning one position.  It is something to be thought about.

I do think that Joyner can have a Reid-like impact in the return game.  The kid is just dangerous.  Joyner should also get some plays designed for him on offense, for he has special ability with the ball in his hands.  UF is recruiting this kid for their "Harvin" position in their offense, so you know he's good.  His coach at STA, George Smith, compared him to Percy Harvin, and Joyner does have that silly explosiveness.

Joyner has ridiculously long arms for his size, one reason people think he will grow some more.  His parents are around the 5'10 range.  Is it out of question for him to grow two more inches?  I don't think so but you never know.  It doesn't really matter what his height is, as he has very good instincts.

Current FSU freshman sensation cornerback Greg Reid.  Though Joyner has the coveted fifth gear that Reid does not, the similarities are endless.  Both are close to 5'9.''  Both have tremendous hips and acceleration (Joyner appears to be at a different speed when on the field compared to other players).  Both have outstanding feet and change of direction.  Both have great instincts and a nose for the ball.  Joyner and Reid are good kick and punt returners.  Reid's vision really sets him apart, and Joyner appears to have some of that in him.  Other comparisons to Joyner I have heard include Tennessee DB Eric Berry, former Florida Gators DB Reggie Nelson, and former Ohio State DB Antoine Winfield.

Here are some videos of Reid in high school and at FSU:

The Ultimate Greg Reid Highlight Tape *FROM LOWNDES TO FLORIDA STATE!!* (via BXSportsCenter)

Through a season at FSU:

Now, who will be joining Joyner in this DB class?

Great class.  I expect Terrence Mitchell to be in the DB class too. Joyner might need a year before he is "shutdown shutdown", but I still expect him to contribute his first year at FSU.

This is really huge pickup.  Probably one of the best pure atheletes FSU has landed in quite some time.