Taking a break from the 'Noles dominating recruiting efforts...

As we head into the bowl season, it’s time to take a step back and look at some of the big picture things going on in college football. I, for one, am always interested in how statistics can help us explain certain relationships within an often complex system of variables. But since I’m not Bill Belichek, I look for simple explanations and low-hanging fruit as opposed to reinventing the game.

Football coaches at any level will give you the same pre-game coach speak: "If we can stop the run, we can stop their offense." And though archaic, the axiom holds true. Positive yardage in the ground game is a great way to alter pass coverage schemes (i.e., Safeties drawn down into the box). For an offensive coordinator, the numbers don’t lie: Teams that run the ball well have a much greater opportunity for offensive success. In the NFL, the chances for a drive continuing on 3rd down and 8 versus 3rd down and 4 is the difference between succeeding 1 out of 3 times versus 1 out of 2, respectively. (A good read on this issue in the NFL here)

One of the fascinating and intellectually rich characteristics of American football is the constant cat-and-mouse game between opposing offensive and defensive play calling. Perhaps one of the greatest compliments to retired FSU defensive coordinator Mickey Andrews was the advent of the spread offense; Mickey’s aggressive man-to-man coverage, speed rush, and front 7 prowess dominated NFL-style FBS offenses in the 90s and early turn of the millennia. (See FSUncensored’s tribute to Mickey here)

Stopping the run, as a result, is a central issue for defensive coordinators.

So the question for us armchair statisticians: Is there an already existing metric for gauging defensive prowess against the run?

Many will point to Tackles-for-Loss (TFLs) as an immediate gauge of defensive prowess. However, according to NCAA stat keeping, a TFL includes Sacks in its calculation. As mentioned in many comments on this site, this is undoubtedly conflating two very different styles of defenses within a single statistic.

A defense can be constructed to stop the run by controlling the Point of Attack, aiming to win the battle in the trenches and force minimal rushing gains. Mickey Andrews has always featured a defense built for speed over size (especially on the edges), hoping to generate pressure on QBs in passing downs, and overcoming the lack of size on defense by again utilizing the speed of the front 7 through penetration and non-assignment football (i.e., gang-tackling). Unfortunately, this year’s defense featured a complete lack of a pass rush from the DE position, average DT play, and LBs and SSs who took bad angles, or got ate up by blocking linemen that no longer had to focus solely on blocking our slight front 4. 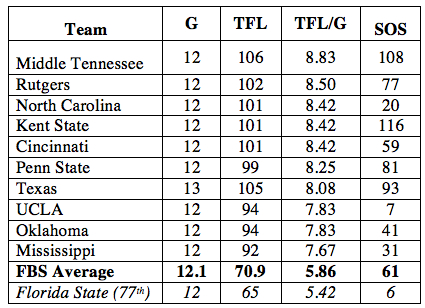 This table is rather remarkable. First, no surprise seeing FSU below average in terms of TFL/G. (I’m not sure if we as a fanbase need any more convincing how atrocious the defense was this year). Also, Texas appears to have played a pretty soft schedule (SOS courtesy of FEI). I wonder if there has been another team with as weak or weaker SOS to play in the NC game?

The next thing that jumps out to me is that there are some mid-major college football teams just plain beating the snot out of teams on their schedule, looking solely at their TFL/G numbers. So keep an eye out for some up-and-coming DCs from these ranks, a la Jim Tressel out of Youngstown State (1985-2000). Fun fact: Jim Tressel, having won 4 D-IAA championships while at YSU, lost the 2000 championship game to a Paul Johnson-coached Georgia Southern. 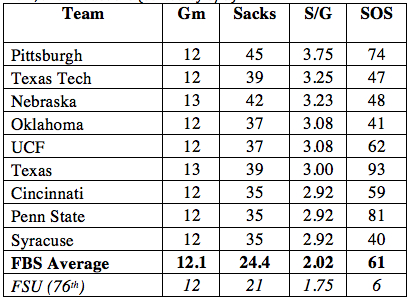 Pitt has been able to generate just an amazing amount of pressure this season, with 12 sacks total (6 solo, each) coming from Junior DT Greg Romeus and Sophomore DT Myles Caragein. Their 45 sacks and 3.75 S/G lead all of FBS. And then there’s Florida State, making the top 63% possible.

So, looking at these tables combined (and sorted by TFL/G): 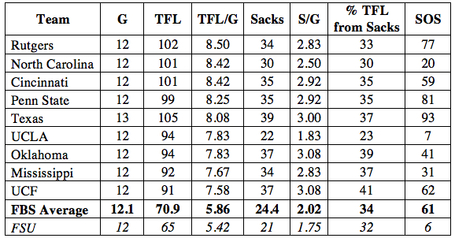 The TFL statistic is conflated; 2 different measures of a defense’s ability are unjustly fused. So, let’s remove Sacks from TFLs. What does that leave us with? Something I like to call stuffs. Here’s another Top 10 list based on this rush defense-assessing metric: 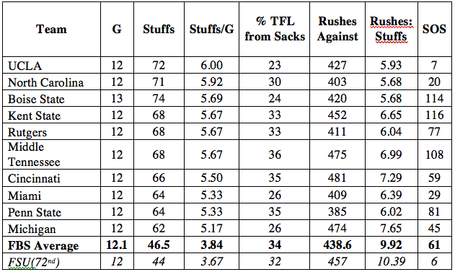 Turns out UCLA is leading the country in stuffs against the run. No team recorded more per game, with North Carolina coming in a very close 2nd.  UCLA Junior DT Brian Price (7 sacks, 14 stuffs) is just a wrecking ball of a lineman, and was recently named the Pac-10 Pat Tillman Player of the Year; can’t imagine this guy not turning pro given the season he had and the season UCLA had (6-6). UNC was led in Stuffs by Junior MLB Quan Sturdivant (1 sack, 9 stuffs), Senior DE E.J. Wilson (3 sacks, 7 stuffs), and Sophomore DE Robert Quinn (11 sacks, 6 stuffs).  Given both teams SOS, their ability to destroy the run in the backfield is even more astounding. UNC averaged 2.5 S/G, which is about 0.5 more than average. Butch Davis and 2nd-year DC Everett Withers have apparently got their personnel and schemes in place, which is bad news for us. How much more impressive now is our comeback against them? UNC had 7 TFLs: 2 sacks, and 5 stuffs (1 less than their per-game average). In this case, their stoutness against the run doesn’t really explain just how effective Ponder and Jimbo were in the passing game.

I also included the # of times opponents ran the ball against that team to better assess the value of stuffs. As it turns out, on average, UCLA and UNC turned 1 out of every 6 opponent rushes into negative yards. These are drive killers, just like sacks, but against a team’s run game. (At least with an offsides or holding you get to work the same down again.) How much more impressive is this statistic when we take into account that these stuffs are coming against (most frequently) attacking linemen; not only do UNC and UCLA hold the point of attack when attacked, but are actually beating opposing linemen at their own game. It’s possible there is some noise in the stuffs statistic. For instance, a QB who has tucked the ball (designed or not) and is tackled behind the line would be the non-sack TFL statistic stuffs. But we should be seeing defensive prowess against the run game. And yet again, FSU brings up the rear at the 40th percentile.

I’ve actually emailed the NCAA stats division about separating out Sacks from TFL (and even having their yardage imposed on the recipient offenses’ total, as Bud has suggested). But in the mean time, we can start thinking about TFLs in terms of sacks and stuffs.