Ok, it's been two entire weeks since Signing Day '09 and I'm already having a few recruiting withdrawals.  As a result, I decided to put together a small recruiting post for our Wednesday discussion until we start gearing up for the big Miami game tonight.

Feel free to discuss any and all recruiting related matters in the Comments, and if the other writers would like to add to the post they will during the day.

I just thought I'd give a short introduction to some of the players out there for 2010 who already have some Florida State connections.

In the recruiting world (and apparently the professional wrestling world) a new prospect who is somehow related to a former player is known as a "Legacy."  Schools frequently look to these players to be some of the core commitments given their connection to the university.

In the past, we have used our relationship with the Sims family to help with both Ernie and Marcus.  We developed ties with the Boulware family to sign Michael after Peter's success, and we signed both AJ and Derek Nicholson.  David Ponder's experience at Florida State only helped our recruitment of his son, Christian, and Paul Piuorowski provided a solid connection between the program and his son, Caz.

However, when left in the hands of a lazy recruiter, recruiting a Legacy can turn into nothing more than a favor to a former great.  Similar to our previous offensive staff's penchant for signing less than stellar Lincoln players just to keep a Trojan on the roster, offering someone's kid or brother can turn into a cop out during recruiting season that makes a scholarship offer a charity case and not a quality investment in talent.  Additionally, a coach has to be very careful when recruiting a former player's family members.  By most accounts, our coaching staff has managed to maintain a good relationship with Jessie Hester, despite not offering his son, now a solid WR for the University of South Florida.

Update: I forgot to add, we better hope we didn't burn bridges with Jesse Hester, Sr.  He's the head coach at Glades Central, or as StateofMind likes to call it (along with Pahokee) "The Muck."

In 2009, Dan Hicks was the only Legacy we signed.  We missed out on Phillip Thomas (freaking Amato) who would have been a second.  In 2010, however, there are several very good prospects who are related to some former Nole greats that deserve scholarship offers based on talent, not just relationship.  Let's take a look.

Christian has unbelievable potential at the QB and WR positions.  If we are able to sign him (looks really good right now, Lawrence has been recruiting the kid forever), the debate to put him at QB vs. WR will be just as strong as the Willie Downs WR vs. Safety debate.  Christian is a great playmaker and would be a top Florida State target even if his name weren't Green.

Willie Jones, Jr is an example of what can happen when a Legacy might not be as good as his famous relative.  Willie Jr had tremendous talent and potential, but unfortunately his career was cut short due to injury.  Christian is a high quality player at a position of need.  I'm not sure if I would trust his listed 40 time, wait until camps and more information gets out.  Look for Christian to be one of our top LB targets this year along with Jeff Luc and others.  Christian is a good enough player that, given our need for LBs, he would be recruited regardless of his name. 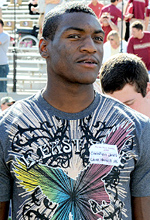 Jarred is another QB/WR hybrid similar to Christian Green, but Haggins' future will probably be at WR given his height.  Rivals currently has him on their "250 to Watch" list and he plays for state/national power Lakeland.  Haggins had a fairly solid year last season for the Drednaughts who went 14-1 but were blown out by St. Thomas Aquinas in the 5A title game last year.  His stats before that game were: 67/120(56%), 1209 yards, 13 touchdowns, 4 interceptions.  Haggins is definitely a solid prospect, but we are currently high on the list of a lot of players that fit his mold: small, speedy slot WR.  He will be recruited by Florida State, but I would imagine DJ Johnson, Chris Dunkley, and some out of state guys will be higher priorities at the slot receiver position.  However, Haggins is a great prospect to have as a backup plan, if we can still get him at that point.  If Green plays QB, we may look to sign Haggins as a 4th WR anyway, depending on scholarship crunches and Taiwan Easterling's future. 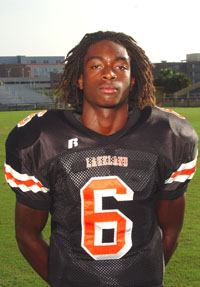 Plays LB, which we've already said is a pretty big position of need (among many) next year.  Noles fans who have seen him play like him, and then there's his Youtube highlight reel.  I don't know what Brandon thinks of Greg's career here, so we might not be able to wait till the last minute with this kid, but I don't really know if that's a bad thing.  I would think that Jones, Luc, Jeremiah George, Alec Ogletree (listed at safety but I really want him at OLB... we should recruit this kid very very hard), Gerald Christian, BJ Butler, and Gideon Ajagbe (the final threeare probably Gators, but we should recruit the heck out of them) would be higher priorities at LB this year.