Thursday night, the Noles weathered a ten day lay off and a terrible shooting night, hitting only 30% from the floor, to beat the Yellow Jackets at home. Douglas ralied the troops in the final 5 minutes to lead the Noles to victory. Georgia Tech was led by Peacock and Lawal, who went for his 14th double-double of the season.

Tonight, the Noles turn their focus to the Clemson Tigers, who are coming off an absolutely dominating performance over Duke, in the latest of string of upsets. USF upset the quiet Big East power house Marquette last night, showing that anyone in any conference can win or lose.

Take a look inside for a couple more thoughts on the GTech win and tonight's preview/game thread for Clemson. This will be a benchmark game for our season.

Corey Clark at Nolesports.com put it well when he said "FSU avoids a stumble in Georgia Tech game." This was a game that we expected to win, aside from a surprise victory against Wake and a couple of close ACC games, Georgia Tech was not living up to its potential this year. With a brutal finish to ACC play rapidly approaching, the Noles had to win this one. Toney Douglas said this after the game: "I really appreciate the win.I know my teammates do. Everyone sees Georgia Tech at 1-6, so we're supposed to win this game regardless — even though they can be capable of being one of the best teams in the league."

Leonard Hamilton recognized the need to win this game and had this to say at the half: "I told them we had to grow up, to be very honest with you.That we had to grow up and that we were better than the way we were playing." Halmiton recognizes he has the foundation to have an outstanding team, who should be competing late into the season and possibly winning a tournament game or two. I'm glad to see that there is some frustration coming from this disconnect. Hamilton is showing signs that he gets it. We have a great deal of talent on this team and we should have high expectations.

Here is a quick look at the numbers from Thursday night: Turnover% was the best we have seen in some time and we finally made it back to the line...otherwise it wasn't a pretty night. (A lot of our free throws were in the last few minutes as GTech was fouling, so this is an inflated number)

Tonight...we have this to look forward to 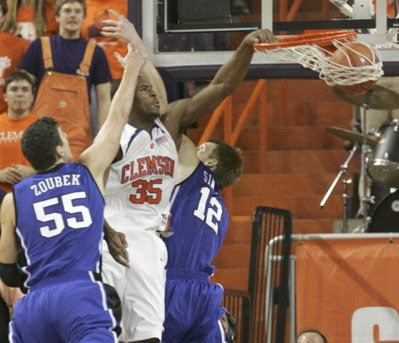 All kidding aside, Clemson is a phenomenal basketball team; I picked them to compete for the number three spot in the ACC this year. Currently, the Tigers sit at 19-2, 5-2 in ACC play, ranking #11 in Ken Pomeroy's standings.

In my season preview, I wrote the following about the Tigers:

Last year, the Clemson Tigers finished an excellent 24-10, going 10-6 in ACC play and losing a close game to Villanova in the first round of the ACC tournament. The Tigers earned a 5 seed last year after making it to the Championship game of the ACC tournament. Unlike Wake, who returns a lot of contributors from last year, Clemson has only 67% of returning minutes this year. It appears that the loss of their seniors has had the biggest impact on their defense. Last year, their defensive efficiency was ranked 12th overall in the nation. They have dropped this year to 36, but they have made up for it on the offensive end, as they are now ranked 6th in the nation and 2nd overall in the conference. Clemson had a challenging OOC schedule with a marquee win over Illinois at Champaign-Urbana. Their average OOC opponent rank was 148. They also beat Miami in their ACC opener, handing it to the Canes 91-72 at Miami. Right now, this team is probably playing above expectations, but they are not showing any signs of slowing down.

They haven't slowed down at all. Their only two losses this year came to Wake Forest and UNC in back to back games at home then away. UNC played a great game against Clemson, defeating them 94-70. Clemson is an extremely balanced team, ranking 12th overall on offense and 23rd on defense. We currently stand 158th and 15th respectively.

A couple of things stand out: This is a team that likes to play fast and gets it done in transition. They shoot the ball extremely well and they take care of the ball, only turning it over 1.8 times for every 10 possessions. We turn it over closer to 1 in 5 possessions. I find it interesting that they don't get to the line that often despite their aggressive play and they do not do well on the defensive boards. But, they absolutely clean up on the offensive glass. Why is that? Clemson is not a huge team, ranking 208th in the country in effective height and 145th in Average Height at 76.6. Raymond Skyes is their tallest player at 6'9, but he is a beast on the offensive glass and is an athletic freak. Pomeroy believes that height helps you more of the defensive end, specifically the defensive glass, than the offensive end. So...why are we so bad on the defensive glass? Positioning, understanding and we defend the shot extremely well, espescially the three point line, stretching our defense. Some of it comes down to wanting the ball...we're getting better.

Let's look at the four factors for each team through out the season:

These teams are surprisingly similar. The overall trends on these graphs show a similar pattern, the major exception being the more consistent eFG% by Clemon and our terrible TO%. Look at how the FT rate precipitously dropped for both teams when ACC play started. Unlike FSU, Clemson does not rely on the FT line to make a majority of their points, only scoring 17% of their points from the line, compared to us at 24% (which is 29th in the country)

Here is a look at our season numbers:

Very similar overall pattern with the exception of some major factors: tempo, offensive effeciency and turnover percentage. Our 3-FG% took a major hit in the last game, so don't get too worked up about that. The really interesting number is that teams are putting up 35% of their shots from three point line, which is significantly higher than the national average, even with the three point line moved back. This is thanks to that stellar defense we have on the inside. During this game, watch how our guys move without the ball on defense and how they anticipate the ball movement, denying the inside pass.

Here are the likely starting line ups for the game:

K.C Rivers, Booker and Ogelsby can play, all with ORtg higher than 110, with Rivers over 120. Rivers shoots a blistering 55.2% eFG%. Booker is at 55.9 and Ogelsby 52.6%. Rivers and Booker stay on the court for the entire game. Their bench gets limited minutes. Rivers also has a staggeringly low TO% of 9.1. Stitt and Sykes are prone to TO, but they are guards and that's not so surprising. Rivers is going to be a tough match up for Singleton. At 6'5, Rivers is not the biggest small forward but he is an outstanding player. Booker is also going to give us fits. Fortunately, we're big on the inside and we have seen more agressive play from our guys down low.

Look for an incredible game. We're due for an upset. Clemson is coming off an amazing beat down of Duke and we're just happy to get by GTech. Look for us to once again to force another up tempo team to play at our pace. If we have a bad shooting night, like Duke did, we're in for a long night. I honestly think that will be the difference in this game. Shooting 30% will have us buried by the end of the first half without a chance to recover.

The game will be televised on Fox Sports South. Also look for game feeds on justin.tv and http://www.atdhe.net/. If you have XM radio, check out channel 190.