In the Treatment Room: A Discussion About Anterior Cruciate Ligament (ACL) Injuries

Share All sharing options for: In the Treatment Room: A Discussion About Anterior Cruciate Ligament (ACL) Injuries

In August, we learned that Tavares Pressley tore his Anterior Cruciate Ligament (ACL) in practice and would be out for the remained of the season.

In the second installment of the In the Treatment Room series, we take a look at the dreaded ACL injury and what to expect from Tavares.

One of the most well recognized injuries in sports is a tear/rupture of the Anterior Cruciate Ligament (ACL). Unfortunately, Tavares Pressley tore his during practice this year, which is not a common event as most ACL injuries occur during game situations. I don't know the specific circumstances in which the injury occured. Many discussions about sports injuries discuss tendons and ligaments. Ligaments connect bones together to create joints. For example, the elbow contains the Medial Collateral Ligament of the elbow, which is commonly injured in throwing athletes. Your shoulder is composed of many ligaments including the scapulohumeral ligaments that connect your shoulder blade to the bone in your upper arm. When you sprain your ankle, you injure a ligament.  Tendons, on the other hand, connect muscle to bone. Your Achilles Tendon attaches your calf muscles to your heel bone. Your biceps tendon attaches your bicep to your forearm. Injuries to both Tendons and Ligaments occur in the form of partial or complete tears. Tendons get "irritated" resulting in a tendonitis. Sometimes the terms tendons and ligaments are interchanged and that is not correct.

In the United States, there are approximately 200,000 ACL related injuries each year. 95,000 of those are complete ruptures of the ligament. There are almost 100,000 ACL reconstructions performed each year. The sports typically associated with ACL injury include football, basketball skiing and soccer. Surprsingly, girls injure their ACLs at a rate 2-9 times higher than boys. This difference has been studied in detail and there is no specific evidence for a specific cause, however it is likely realted to intrinsic (joint laxity, joint alignment, ligament size) and extrinsic factors (strength and coordination, level of skill and conditioning and shoe-surface interface).

There was a recent study out of the University of Pittsburgh and the University of Wisconsin printed in the American Journal of Orthopedics last year that specifically looked at the rate of knee injuries in elite football players. They evaluated 332 college football players at the 2005 combine (it takes a while for research to make it through the submission process to be published in the scientific literature). 54% of the players had a history of a knee injury and the total number of knee injuries was 233, which averages out to 1.3 injuries per player injured. Eighty-Six players (25.9%) had some form of surgery. The most common injuries were to the medial colateral ligament, meniscus and the ACL. The two most common surgeries were meniscus repair and ACL reconstruction, occuring in 39 and 35 players respectively. The positions that had the highest rate of knee injury, not exclusively ACL, were the following: Defenisve lineman (68% of players), tight ends (57%) and offensive linemen (57%). However, running backs and line backers were more likely to have surgery. Of the 36 running backs they evaluated 36% of them had knee surgery. Of the 35 linebackers evaluated, 34% of them had surgery. The position with the least number of knee surgeries was the Quarterback (8.3%).  Think about that...out of 332 players at the 2005 NFL Combine, 25% of them had knee surgery.

Your ACL is one of the major structural components of your knee, connecting your femur (thigh bone) to your tibia (shin bone). The ligament is only abou 38mm in length and 10mm in width. It runs from the the posteromedial corner of the medial aspect of the lateral femoral condyle to the interspinous area on the tibia. Meaning in runs from the back (posterior) of your knee on your femur (your thigh bone) to the groove that is in the middle of the top portion of your tibia (shin bone). Here's a picture: 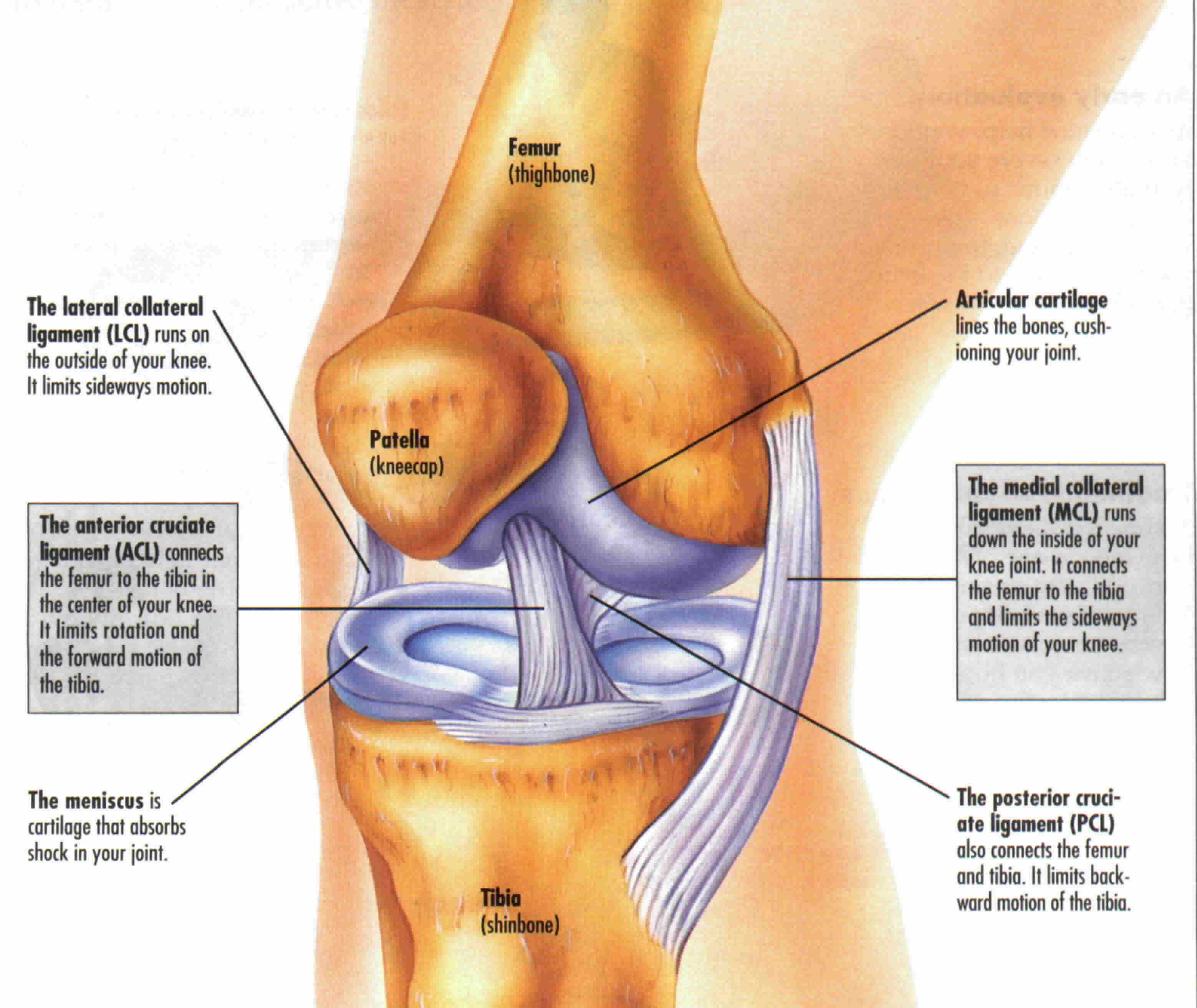 Here is a nice video that shows you all of the ligaments in the knee with an explanation of their function.

Another way to think about it is if you take your right hand and cross your third finger over your second finger. This resembles the positioning of your PCL and ACL in your left knee. Your ACL is represented by your 2nd finger and your Posterior Cruciate Ligament (PCL) is represented by your 3rd finger. PCL injury is very uncommon and does not require repair except in elite level athletes. The Anterior and Posterior designations refer to where the ligaments insert into the tibia.

Your ACL helps to prevent anterior displacement of your tibia from your femur, meaning it helps to prevent your shin from moving too far forward. Look at the way the ligament runs from the back of the femur to the front of the tibia. The ligament is tightest when the knee is extended (straightened). There are other subtleties to how the ligament is taught or lax depending on the degree at which the knee is bent, but that isn't important for this discussion.

ACL injuries typically occur when there is a significant shearing force applied to the ligament due to quardriceps contraction, particularly when the knee is in a position of extension. This usually occurs in a non-contact deceleration movement that occus with some component of twist. Imagine your running back trying to make a quick juke or lateral move during a decelration. Others describe it as an athlete landing and then trying to quickly pivot in the opposite direction.

When the injury occurs, there is often a pop that is heard. A few hours after the injury, there is significant swelling that results from a hemarthrosis (blood in the joint). There is a classic triad of injury, referred to as the "terrible triad" that occurs when a force is applied to the side of the knee (a player being cut block or a lineman having another player role up on his knee) that results in an ACL, MCL and medical meniscus tear.

Here are some videos of plays on which ACL injuries occured: Not for the faint of heart.

A torn ACL can be detected on physical exam with the following tests: (Click on the links to see videos)

The ACL can also be vsiulaized on MRI. Here is a normal MRI: (Hint the red arrow is pointing to the ACL.

Here is an abnormal MRI:

The two images are using different MRI techniques. I am not going to get into the physics of MRI here. If you're interested, email me. But the ACL that is highlited in this picture should be the same color (density) as the PCL that is highlited. Also note, that the wavy ACL is not connected where it should be on the back of the ACL. That is a complete rupture of the ligament.

If an ACL is ruptured it need to be repaired or else the joint is going to be very unstable. If the ligament goes unrepaired, you typically get meniscal tears (the padding in the knee joint) and degenerative joint disease. There are a variety of operative repairs. All of the surgeries essentially replace the damaged tendon with a donor tendon. That tendon could come from the patient or from a cadaver.

Here is a cartoon video of one kind of repair, using a graft from the patient's patellar (knee) tendon.

Here is a real video of an ACL repair. If you have a quesy stomach don't watch this as it is real. Pretty amazing that all of this is being done through a tiny camera. The recovery period requires significant ammount of therapy in order to regain strength and stability of the knee joint. The Therapy is divided into four categories:

4. Phase 4: (Six weeks plus)  Increase strength and agility, progressive return to sports, which may take up to 6-9 months depending on the level of activity desired.

Athletes can typically return to their previous level of competition, though it might be at a slighlty reduced level of competition. In one study, 100% of athletes were able to return to the NFL after an ACL injury. Here is an interesting article about specific injuries and NFL careers. Here is a really nice article that looks at NFL running backs stats pre- and post- ACL injury.

Hope this helps you to have a better understanding of ACL injuries. It looks like Tavares should be back in time for the regular season. He will have had almost a year recovery period and should be close to his previous level of competition.