We published this in 2009. Eight years later, FSU's coach is still limiting his team's ability to score.

Editor's note: This story was originally posted on May 12, 2009.  We just update the timestamp on a yearly basis.

Last Saturday, FSU baseball took on Georgia Tech in Atlanta.  The 'Noles won the game, 8-6.  Even though we won, I was saddened by the Noles performance.  Why?  With the first two hitters of the game reaching base for the 'Noles, FSU's #3 hitter, Mike McGee stepped to the plate.  1st & 2nd, no outs, tie score, top of the first.  Florida State coach Mike Martin had him sacrifice bunt.  In the first inning of a tie game, Mike Martin had his best hitter sacrifice bunt.  Mike Martin has won a lot of games in his illustrious career, but many believe his poor managing cost the Noles a shot at numerous championships over the years.  Martin has never won a championship, forever the bridesmaid.

I knew that bunting in that situation was absolutely the wrong move.  I knew it's been proven time and again and that it's not a matter of preference or a mere judgment call.  I just didn't know how wrong.  For that, I turned to Beyond the Box Score, the award winning baseball analysis site.  These guys do the same kind of work that professional baseball teams pay a lot of money for.  For instance, the Tampa Bay Devil Rays are now run by a bunch of Ivy League Graduates who embraced advanced measures of defense, eschewing fielding percentage for a better measure that actually gauged how much ground a fielder covered.  The point is, these guys know what they are talking about.  Teams who don't embrace new baseball thinking are falling behind.  We saw it with the 2008 Mariners (who jumped on board for this season after losing a ton of games in 2008), and now see it with the entire Houston Astros organization.  Unfortunately, we now see it with Florida State.

I went to Beyond The Box Score and asked for their help:

Greetings from TomahawkNation, the FSU wing of SBNation.

We have a problem.  On Saturday, against Georgia Tech, the 'Noles had men on 1st and 2nd with no outs, in the first inning of a tie game.  #3 hitter, Mike McGee, an elite hitter, is at the plate.  The manager had him sacrifice bunt.

Our stats are here:  http://www.seminoles.com/sports/m-basebl/stats/2008-2009/teamcume.html

Any help would be really appreciated.  Our readership is very intelligent and they'd love to see something like this.

TusconRoyal, one of their authors, quickly responded to our cry for help.  In fact, he tailored his analysis specifically to the Seminoles, using the 2009 season's performance to date.

1. Go to this results generator and enter in your team data and/or league. Here is a link with discussion on performing this analysis for a High School Team
2. The results will be calculated and the table you want is labeled: "Run Expectancy Matrix" and "Run Frequency Matrix"
3. Using FSU’s team stats I get: 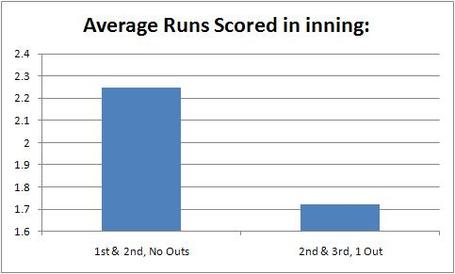 Ouch.  Half a run on average hurts there!  (That's very significant).  He wasn't done, however, as I quickly found out I had made an incorrect assumption...

If you go down to the Run Frequency Matrix, you will find this pretty disheartening:

Here's a  link to the exact math breakdown.

There is no reason to bunt in that situation.  It hurts the Seminoles chances of scoring as many runs as they can. 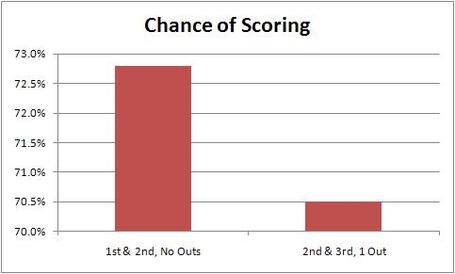 I was wrong!  Bunting didn't help a team to score one but only one run, it hurt the chance to score any runs at all! Why?  The metal bats, smaller ballparks, and poor pitching.   In the college game, every out is that much more precious than it is in the pro game.

In pro baseball, a sacrifice bunt will typically increase a team's chance to score one run and only one run, while significantly decreasing a team's chance of scoring more than one run.  Practically, this means that bunting in professional baseball before the 9th inning, when a team knows exactly how many runs it needs to tie or take the lead, is foolish.  Until the point of certainty is reached, teams should play to score as many runs as possible.  In college baseball, however, it's unforgivable.

Martin's bunting is handcuffing the 'Noles, and it has for years.  In fact, the 'Noles have sacrifice bunted 25 times this year-- almost an entire game of outs given away through poor decision making by Mike Martin!  FSU hasn't been unlucky in the post season.  Martin has set up his teams for failure and heartbreak.  Games that should have been won by a small margin turned into heartbreaking close losses.  Games that should have been blowout wins were turned into close wins, needlessly taxing the bullpen by creating unnecessarily close situations.  That's a result of Mike Martin now allowing his team to score runs at their full potential.  He's essentially the restrictor plate on Seminole baseball.

That's not all.  Even though I didn't ask, the experts opined on another area where Martin is holding FSU back...

Another point looking at Florida State is that they don’t steal successfully enough considering the extremely high run environment that is college baseball.

By "run environment", he means the likely outcomes of FSU's hitters hitting and the typical high scoring nature of college baseball.  Since college baseball is so high scoring, anything that makes less than judicious use of outs must be questioned.  FSU is such a good hitting team that any unnecessary out is magnified-- more than it would be with a lesser offensive club, and much less than it would be in pro baseball (where fewer runs are scored).

So for the team to at least break even running the bases, the need to have a .90% or better success rate.

Ugh.  So, FSUY cost themselves a full game of outs via the the sacrifice bunt (25), and have lost 13.5 runs as a result of foolish basestealing!

You might think that a 90% success rate just to break even in  stolen bases is extreme, but it's a direct reflection of the high scoring nature of the college game and the proficiency of FSU's hitters.  Again, hitters need to hit.  Creating outs via bunting or stealing bases takes away opportunities for its excellent hitters to hit the ball off a non major-league pitcher, in a small ballpark, with an aluminum bat.  Good things happen when metal strikes leather.

As the more detailed explanation shows, and as major league baseball teams paid millions of dollars to find out over the last decade, anything that unnecessarily risks an out in an inherently high run environment is to the detriment of the team.

A huge thanks to BeyondTheBoxScore.com for assisting us with this project.  Please visit them and check out all they have to offer.