Share All sharing options for: The Official Tomahawk Nation Roast of Bobby Bowden

[ed. Note:  Due to continued information gathering and scheduling, the Wednesday Open Recruiting Thread will run Tomorrow.  Make sure to check it for your Seminole showtime info!  Be There!  This Saturday, the 18th!  6pm, DOAK!  Or head out to the TN Tailgate/ Meet & Greet @ 3PMIish (RSVP please)]

Here we go folks.  Tonight is the night that the Tallahassee Quarterback Club will be roasting Coach, so I figured we could join in on the fun and roast him ourselves.

I'll get us started after the jump, and you guys can participate in the comments.

A few groundrules to remember:

I know it's a roast, but the normal TN commenting rules still apply.  So try to avoid the offensive language.

All FSU personalities are fair game.  If you've ever watched a roast on Comedy Central, first of all I'm sorry you had to sit through that, and secondly  you should know that each roaster takes a fair share of shots at the rest of the dais.  I only ask that if you're going to roast fellow TN members, try not to be too mean-spirited, remember rule number 1: we wouldn't allow too many potshots in a normal TN thread, and we won't here.

Try to be funny.  I emphasize try.  No matter how hard you work at it, some people (Comment removed so as to play nicer with NoleCC) won't laugh.  But we'll all appreciate the effort.

Now that we've gotten that out of the way, let the roast begin!!

It's great to be here at the First Annual Tomahawk Nation Celebrity Roast!!  And it's even better to welcome the Man of the Hour, legendary Coach Bobby Bowden!!

For our first roast, we really wanted someone whose name was synonymous with success.  Someone who every Nole fan looked to and admired.  Someone who would appeal to the young athlete of today, and who would represent everything we hope our program can be.  And after Urban Meyer and Tim Tebow turned us down, we called Coach Bowden.

Robert Clecker Bowden was born in a small village in Western Europe sometime during the Paleolithic Era.  His hometown would later be claimed as "Birmingham, Alabama" after the continents split.  As a young man, Bobby often spent his time reading and studying about the great generals of his day.  In later years, he would recount the tail of meeting his boyhood idle, Ulysses S. Grant.  "Dadgum, I met Ulysses S. Grant," he said.

Bobby Bowden's career as a football coach speaks for itself.  For the past 32 years, he has been the head coach at Florida State University where he has led the Noles to an overall record of 309-91-4.  Well, depending on the upcoming NCAA ruling.  His real record might actually be 6-4-2, we're not sure yet.

I see former All-American defensive tackle Ron Simmons over there in the corner.  Ron was the first real star for Coach Bowden's Noles teams, but you might remember him better as the most famous former FSU football player turned professional wrestler.  Although Trent Green claims that Travis Johnson's finisher was much more devastating.

Deion Sanders is with us tonight.  He was actually supposed to be bringing guests with him, but he sent them to West Virginia instead.

Florida State's 2 Heisman trophy winners are here, Charlie Ward and Chris Weinke.  Chris told the story during his Heisman acceptance speech how he and Charlie were actually part of the same recruiting class, and yet they won Heismans and National Champsionships 7 years and 6 years away from each other.  Think of it, 1 recruiting class getting you 2 National Championships so far apart.  Coach Bowden always has known how to get the maximum amount of glory with a minimal amount of work, just ask Mark Richt and Mickey Andrews.

Speaking of Mickey Andrews, I'd like to thank him for supplying the bar-b-que for tonight's dinner.  When we approached him, he was so excited that he'd finally get to bring his grill and roast Bobby Bowden.  I think he agreed before he really understood what tonight was all about.  While we're on the subject of food, let's also thank Ann Bowden for her delicious banana pudding.  I think we all can agree that without Ann's pudding we wouldn't have had signed a single recruit from 2002-2006.

Gene "Dot Com" Williams of Warchant fame is here with us tonight.  Gene has taken a lot of hits from some of the other Seminole websites and sometimes people wonder how he manages to stay so cheerful.  Gene clued me in on the secret strategy that lets him stay grounded in the face of such criticism.  He stuffs his ears full of your $10 bills until he can't hear you whining anymore.  Good plan, Gene.

Unfortunately, due to a restraining order filed by Coach Bowdenin 2003, Jeff Cameron could not be within 50 feet of us tonight.  The Camster does send his love however and wishes everyone a happy Balls McWednesday!!

You can also tell a lot about a man by what his peers think of him.  I look around the room and see a veritable Who's Who of the college football coaching world here tonight.

First off, let's give it up for Joe Paterno everybody.  I think it's great that Joe was able to travel all the way down here to Tomahawk Nation to support his friend, Coach Bowden.  I mean, I know he's not actually here and he's just watching from the press box in Happy Valley, but he still gets credit for being here.

A lot has been made of the rivalry between Coach Bowden and Coach Paterno as to who will finish with the most career victories.  I talked with Coach Paterno earlier today and he's told me he's not concerned one bit about who will win.  He just hopes that whoever wins doesn't break his hip when he is carried off the field in celebration.

Down front is Coach Tommy Bowden, formerly of Clemson University and one of Coach Bowden's sons.  Actually, that table is stuck right behind Bobby's.  I'm sorry, Tommy.  After all these years I thought you'd have finally gotten out of Coach's shadow.  Guess not.

Urban Meyer wanted to join us tonight, but it's a recruiting dead period so he just sent us his speech in 50 separate text messages.

Last week, the Birmingham media quoted Nick Saban as saying "I am absolutely, 100% NOT going to the Bobby Bowden Roast, and I think you're an idiot for asking me that question."

It's nice to see you here, Coach Saban.

Steve Spurrier wanted to join us tonight, but he had trouble packing his suitcase and missed his flight.  It seems he just couldn't get his panties out of a wad.

Which brings me to the man of the hour, Coach Bobby Bowden.  There's not much you can say about Coach Bowden that hasn't already been said.  Of course he's old.  But think about it, we haven't seen someone accomplish such things at his age since the Old Testament.  Of course he takes naps before big conference games.  But he never missed a single episode of Matlock during its run, and he can still complain about how much stuff costs these days with the best of them.

So maybe he has a history of hiring terrible assistant coaches.  When Jerry Lewis helps the handicapped society thinks it's great, so why can't Coach Bowden do the same?  (By the way that reminds me.  If you would, please throw away all of your trash when you are finished eating.  It will help Jeff and the cleaning crew immensely.)

But for all his faults, and all the shots we've taken at him over the years, Coach Bowden is a great man with an even better heart.  It's an honor to get the chance to roast him and to have had him as a head coach for the last 246 years. 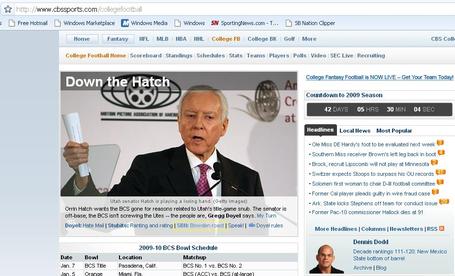