It's Showtime!  Cornerback Terrence Brooks has committed to FSU.  This is the 'Noles 8th commitment for the 2009 recruiting class.  [ed note:  Commitment #7, Corey Miller, will be addressed tomorrow morning.] 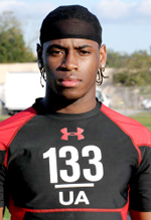 I am a big fan of Brooks.  He had offers from a multitude of schools, most notably Miami and FSU.  He grew up a big Florida fan (how could you not, growing up in Dunnellon).  However, if UF offers him, be very concerned.  I think he would jump at the offer.  Mickey Andrews watched this kid practice for three hours back in the spring, and he was one of our first corner offers.

TomahawkNation.com spoke with Brooks shortly after his commitment.  Brooks stated that he was 5'11" 173lbs.  He had never been to anything like Showtime, but really enjoyed the experience.  The 'Noles coaches treated him well.  I asked him if he would still be taking visits to other schools and he said that he was not sure.

Here is some video evidence:

As you can see, very impressive.  Brooks is a big hitter, almost safety like, at the CB position.  He runs very well.  His hips, judging by some recent 7 on 7 tournaments, are excellent.  In the words of one Florida scout, "he's built like a tree trunk.  His legs are thick."  Brooks certainly seems to have all the tools to excel at the position in college.  Brooks would be perfect in a press scheme.  He has the hand and upper body strength to be a excellent press cornerback in college.

Comparison:  Janoris Jenkins of the Florida Gators.  Their builds are very similar.  Both were underrated coming out of high schools.  And both were fans of the opposition (for their current teams' fans).  Jenkins was a huge FSU and ended up signing with Florida after Mickey Andrews didn't want him.  Brooks is a huge fan of FSU and committed to FSU.  Jenkins and Brooks are hitters at the CB position.  We can only hope that Brooks makes the impact that Janoris Jenkins has.  Some Jenkins video below:

Who will be joining Brooks in the secondary class?  The best bets are DB Lamarcus Joyner, CB Merrill Noel (who is a legit 5'10'', by the way), CB Terrence Mitchell.  As for safeties, committed Chad Abrams, Jared Haggins, and Joyner could possibly play safety.  This is shaping up to be a very good DB class for Seminole fans.