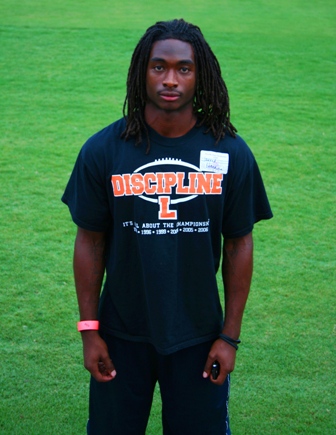 Some of our fans spoke with Haggins at Seminole Showtime and felt he would definitely be a 'Nole.   He said he will play wide receiver.

Haggins plays quarterback at the high school level.  When he gets to FSU, however, he will play wide receiver.  He compares favorably to Preston Parker (on the field, hopefully not off it).

Is a smooth, good looking athlete with excellent initial quickness, change-of-direction and ability to make people miss when on the move. He's a quick-footed athlete and is extremely slippery to bring down in the open field. Flashes loose hips and great stop/start cutting ability--does not lose much in his transition. Possesses a slighter frame, but is not afraid to fight for extra yards and lower his shoulder. Is difficult for defenders to get a clean shot on him as an in-line runner with his low center of gravity and shifty, sudden running style. Accelerates to full speed quickly when he finds an open seam and displays good vision and movement skills in space. Is an extremely dangerous player on the edge because of his run/pass ability. As good of an athlete as Haggins is, we feel he may be more quick and sudden than he is purely fast. Has good, competitive speed. It's his change-of-direction and initial burst that stands out. Overall, Haggins is just a good football player. He is confident, tough, shows good leadership and he can certainly create mismatches with the ball in his hands.

Haggins is a lifelong FSU fan.

Welcome to the Seminole family, Jared!