Every day while catching up on my daily Nole must reads, I very often wonder to myself, "Are my 2009 Noles going to be better than last year’s team?"

Recently I came across a similar series that I thought I could apply to our 2009 Seminoles, which might make for entertaining reading to some of our TN members. While this series may not actually answer my question, it might at least give us something to discuss and debate until more information starts rolling in once the practices actually start.

What I will attempt to do, is to project how our 7 basic units (defensive line, linebackers, secondary, backfield, offensive line, receivers and tight ends, and special teams) of the 2009 Noles will perform as compared to last season team.

The way we will try to come up with a possible answer is to address each of the 7 units above individually, by using the projected 2 deeps as of today, in comparison with last years starters. We will look at who was there last season, analyze the roster changes, if any, and then we will all decide if these changes will result in progression, regression, or if we can expect little or no change.

We must remember that with the kickoff still over a month away, and the start of practices still over one week away, it will be impossible to reach definite conclusions at this time. There could very well be injuries, promotions, demotions, and incoming freshmen who might surprise us all. I will ask you the TN members to project via poll, (your favorite way and the easiest and most accurate measure available to us) how well you expect the 7 individual units will perform this season. At the end of the series, I will report back to you, the TN readers, what your expectations of this team are at this point in time.

Recently NoleThruandThru gave us his projected two-deep lineup and asked you for your thoughts on the 2-deeps. While there were some very good comments and opinions posted as to what may happen before and during the upcoming season, for the purpose of this series I will be using only the official Seminole 2-deep lineups posted along with some projections and input I received from FSUncensored.

Please remember that while we lost some very good individual talent, we want to look at the each unit as a whole when we finally vote on whether that particular unit has progressed, stayed stagnant, or regressed, in comparison to last years unit.

Today we will start with the DEFENSIVE LINE.

2008 DE=Benjamin Lampkin (really a LB) started the first 3 games, then was replaced by Neffy Moffett who started the rest of the season. In 10 games played, Moffett had 19 Total Tackles of which 11 were for loss, 5.5 sacks, 1 int, 2 QBH, and forced two fumbles and recovered one. Both players are now gone.

2008 NG=Moses McCray started the first 2 games then was replaced by Budd Thacker who started every remaining game until the Champs Bowl when Paul Griffin started his last game as a Nole. Griffin is the only one gone and only had 11 Total Tackles, 1 for loss, 1 QBH, and 1 FR.

2008 DT=Kendrick Stewart started 8 games and Justin Mincey started 4 games, 3 of which were the last 3 games.

Well there you have it. I guess the real question is not if Brown and Moffett can be replaced, but whether their replacements will be able to keep up the kind of pressure on the QB we saw last year, to prevent the rest of the defense from being shredded.

What is yours? Please vote now.

New Readers: please read through the Tomahawk Nation Welcome Guide! We put a lot of work into that and it should enhance your experience. 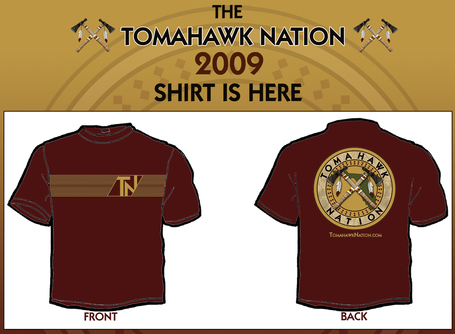