Until only the last 20 years of professional football Drafts, eligibility for the NFL draft was limited to players who had "completed 4 years of [college] football eligibility or 5 years from the time they entered college" (Staudohar 1996, Playing for dollars: Labor Relations and the Sport Business). Heisman-winner (and college Junior) Herschel Walker became the first CFB player to challenge this by bypassing the NFL to sign with the USFL in 1982. The NFL relented in 1989, when Barry Sanders became the first college Junior drafted under the rule change. Players now were required to only be 3 years removed from high school.

The face of the game has also changed as more player representation has challenged the owner/operators of the NFL. As of 2006, NFLPA has negotiated that roughly 60% of league revenues go to its players. The league has experienced massive growth in the last 20 years. 2009 League revenues were pegged at $6.0 billion, meaning that somewhere around $3.6 billion is going to players. Excluding NFL pensions and other expenses and the 32-team / 53-man (45 active + 8 IR) roster limit (~1700 players), the average NFL player is grossing $2.12 million (obviously, this does not reflect the actual variation of contracts). In 1987, NFL league revenues were $800 million. At 56.5% (NFLPA-bargained) player revenues and 28 teams / 53-man rosters, players were grossing around $305,000 on average.

NFL rookie contract amounts have also skyrocketed over the years. From John P. Lopez at SI.com:

It is laughable that a gifted but unproven quarterback like No. 1 pick Matt Stafford, who has accomplished less in the NFL than even Ryan Leaf, gets $41.7 million guaranteed. Stafford's guaranteed money is roughly twice what the Patriots' Tom Brady makes in guaranteed money. Meanwhile, Eli Manning's pending blockbuster deal, which has jaws dropping across the league, will guarantee less than Stafford's, at $35 million.

So the financial reasons for getting into the league have been never been more appealing. Players, anxious to make big bucks either to support their family or just to maximize on an immediate return, are declaring for Early Entry to the NFL (draft) after their junior or redshirt sophomore season's conclusion. This isn't surprising. 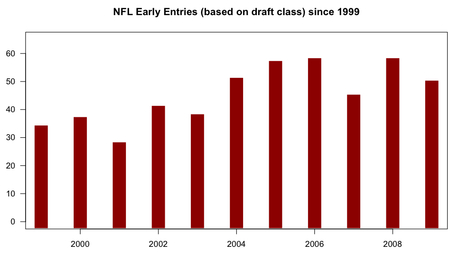 But what else contributes to a player leaving early? Are some schools just better than others at convincing their kids to come back for that final year? Or is it psychological?

The table above lists players since 2004 (i.e., NFL Draft classes 2005 - 2009) who have left college early. Florida, Ohio State, and USC have had 10 players since the end of the 2004 season declare early, leading the pack. Florida State is tied for 4th with Georgia and South Carolina.There is no doubt that these schools have had a lot of talent over the years come through.

Florida, except for this past year's draft, fits the bill. They have two championships in 3 years, and have had 10 guys leave early in the last 5 years. After their win in 2006, DE Jarvis Moss, LB Brandon Siler, S Reggie Nelson, CB Ryan Smith all declared early. After their win this year, however, only Percy Harvin left early to be drafted by the Vikings, trading grass for turf...literally. Kudos to Urban Meyer & crew for convincing his seniors to upgrade his burgeoning shrine in college football.

Let's look at the above table's information a different way. A simple bivariate analysis (correlation) between Winning Pct and total EEs is r = 0.569 at P = 0.05.There is a statistically significant positive relationship here (which is considerable given the small sample size) that winningest teams are losing more players earlier.

You can see the positive relationship here. And by positive I mean Winning Pct and Total EEs varies in phase (together).

Ok, enough stats. But some of the data should stand out to us. Oklahoma got crushed in the '05 Orange Bowl against USC, but has been able to avert the early attrition. Kudos to Bob Stoops & crew.

But cast your gaze on some of the recent ne'er-do-wells: FSU, Miami, and Spurrier's boys at South Cackalacky. None of these teams have been in the NC (heck, top 10) spotlight in quite some time. But the talent is still there, based on the shear number of (1) SC football players taken this year (EEs+grads drafted) and (2) total FSU and Miami players taken this millennium.

Tying this all together, we're seeing players leave programs that are successful and winning MNCs, as well as unsuccessful (either by expectations/standards or actual Winning Pct). FSU and UM are still getting the talent, but there have been obvious coaching issues, to say the least (no need to elaborate there).

2 more things to think about here:

(1) LSU had only 3 guys leave early during the period. This was happening either during Jimbo's time there or were his recruits/players. Hopefully that carries over into his tenure here, because senior leadership, talent, and experience is phenomenally important. Every time you look at our record the past 5 or seasons, think of all the kids that left early (Geno, Timmons, Brown, etc.) and how they couldwould have altered games and thus season records!

(2) NC State had 5 guys leave early during the period. Apparently CTC got talent to go there, but even with future NFLers in DE Mario Williams and QB Phillip Rivers, guys just wanted to get the heck out of there. That 3-9 2006 campaign was just plain awful. To which NC State Boosters heartily agreed.

So here are my qualitative - quantitative crossover nuggets:

Losing + Talent = increased EEs (FSU, Miami, NC State). Maybe this is a bit of a reach to say us and Miami are "Losing" but compared with expectations it holds.