As many outlets have already confirmed OLB Nigel Terrell has chosen to play football at FSU. We chose to delay our story until he had officially picked FSU at his high school publicly, and FSUncensored notified us of such, as he is there.  Terrell was pulled from one of the most difficult states to get a player, bar none. This Outside Linebacker can really play, especially out in space, and FSU made sure that they secured his commitment. LB is the biggest need in the recruiting class right now, so this is a huge get for Florida State. He made his decision today, ultimately between Ole Miss and the Seminoles.

Qualifying: Not a risk. 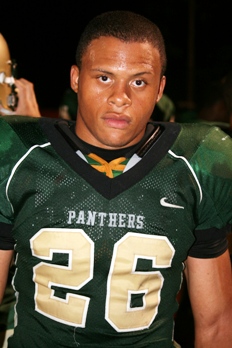 Read more about FSU's newest LB recruit out of Alabama, including video, scouting, comparison, and an interview!

ESPN's evaluators had this to say :

"A very disruptive perimeter defender, Terrell is just lacking a bit of size and polish to be considered a premier outside linebacker in this class. Can run, close and hit as good as most linebackers in this class. Tall, long and rangy and his well-defined body still looks to have a ton of physical development left. Plays taller and a lot faster than listed measurables. Very difficult to outflank and reach this guy on the outside; he has a supreme blend of first-step quickness, acceleration and body length. Covers a ton of ground quickly in the short-area and displays smooth hips and good footwork needed to redirect and mirror in space. Takes direct angles without a lot of wasted motion. Excels as a vertical attacker and pass rusher. Anticipates the snap, flashes explosive get-off and can effectively dip and rip under the blocker's pads to get the edge. "

Terrell seems like a great kid.  With camera's and reporters all around him, he went outside to a table, casually pulled up two chairs for Chris Nee (Warchant) and myself.  Terrell is extremely humble, well put together, and while I don't want to call him shy, he is not a showboat type.  He answered questions thoughtfully, and FSU fans should be very happy about snagging the guy ESPN calls the 8th best outside linebacker in the country.  It was refreshing to have a kid thank everyone for coming, and not play this game where he puts on the hat of one school and then toss it away before donning the cap of another.  Terrell knew where he wanted to go, called the coaches, and announced it before the first game of his Senior season.  Here's what he had to say...

I decided to commit to Florida State because it was close enough to home but far enough for me to be independent.

I really like Tallahassee, with FAMU and TCC as well, because I have some friends down there.  I like Florida State's academics because I don't know what my major will be yet and they offer a lot of programs.  I have a pretty good relationship with the coaches.  I try and call them at least once a week.  Before I met the coaches, we talked once or twice, but once I met them I could tell they weren't messing around.

They told me they really wanted me there and they would wait until signing day for me to commit and I felt like if they would do that I would go ahead.  I felt they were really straight foward.  Coach Bowden told me that they weren't that type of coaching staff that plays around.  The second visit I brought my family and we all talked about (w/ coach Bowden), and how him and my family grew up in the same area.  Coach Bowden is a close friend of our former Mayor and he plays golf up here.

On the upcoming season:

I'll play both ways, linebacker/ stand-up defensive end, and a bit of receiver.  At FSU I'll play at Outside Linebacker.  For the next level, I need to improve everything, but being a better tackler is up there.  Coach Burnett indicated that this is only his 2nd year on defense and he is the best kid he has ever coached, thinks he has tremendous upside, and is a great kid away from the ball.

On recruiting for Florida State in the future.

I spoke with Telvin Smith (FSU commitment at linebacker from Lowndes County), and Christian Jones, and they seem like good guys.  I don't have any of their numbers yet, but I would love to call them and bring in the best signing class that FSU has ever had.

When did you know FSU was right?  What sealed the deal?

I went over the depth chart with Chuck Amato and he showed me that FSU didn't bring in any linebackers last year and they are in desperate need for linebackers, their youngest outside linebacker is going into his junior year (Bradham).  I knew FSU was the right choice about a week and a half ago.  The coaches were surprised I committed when I did but I want to be there.  [Many thought he would visit more schools.]

On visiitng FSU officially (all kids get one official visit per school):

I want to go to the Miami game but we are probably going to have practice so I may have to go to Jacksonville state.  I probably won't take any official visits, I am very solid to Florida State.

I want to play at 215 this year, but our defense runs so much so we are all about conditioning.  I have the potential to blow up.  I don't get any extra meals here, maybe 3 meals a day, no meal plan, and no supplements, so I definitely can add size.  (He has a bigger frame than Dekoda Watson).  I've been playing since 7th grade (that's kinda late).

[Editor's Note:  He has average size hands, very long arms and a better frame than I thought.  His frame is definitely bigger than current 'Noles Dekoda Watson or Maurice Harriss or Kendall Smith.  He has the bone structure to add weight.]

More on why he chose FSU

I would rather live in Florida than Ole Miss, and Florida State offers me more post-college opportunities.  I can get a great education at Florida State.  The campuses were equal, but my relationships with Florida State were just stronger than mine with Ole Miss.

Which coaches recruited you the hardest?

I am the closest with Linebacker Coach Chuck Amato, he's a great guy and he's the one I call the most.  I also call Fisher a lot.  He refused to talk negatively about Ole Miss.

They didn't have much film on this week's opponent, but I asked him about it.

Watching film is alright, I'd rather go out and practice, but it's a great tool and very important.  My mom doesn't have money for me and my brother to go to college (his brother is a tall lanky Junior), and it's great for me to get a scholarship and know I have secured my education.

[Editor's note:  Terrell reallly appreciates his scholarship.  He is fully qualified, a very smart kid, I didn't have to edit this interview much at all.]

On Jimbo in the wings...

It's great to know Coach fisher will be my head coach.  I don't have to worry about that.

Xavier was a very explosive Linebacker for the Virginia Tech Hokies. Like Terrell, Adibi was a great defender on the perimeter, who lacked ideal size in high school but had the frame to grow at the college level. Terrell is a great hitter on the run, and can tackle like very few in this class. Nigel is very quick and covers a lot of ground like Adibi as well, by taking good routes.

Nigel had a great time at Seminole Showtime which was a big part of pulling him out of one of the tougher places to recruit. Nigel had taken multiple trips to Florida State, returning with his family after Showtime (which probably iced it right then and there) and chose the Seminoles over quite a few different schools including SEC offers. Nigel profiles as a Will (WLB) at Florida State, and will be part of an extremely important defensive class for 2010. Welcome to Florida State University Nigel!

FSU has a serious depth issue at Linebacker right now, and this commitment is huge for our class. Many would argue that LB recruits are the most important on our board (including myself and FSUSOM), even if players at other positions may be more talented. Florida State did not take a LB last cycle, and while many believe C.J. Mizell will make it into school this spring, it is anything but a sure thing. Nigel truly helps FSU's class. Just think one day you may see Nigel-Nigel-Nigel on the field.