Wow!  Not many expected this to happen.  Many scouts in Florida consider him to top QB in Florida, and he will be a nice addition to the Seminoles.  He is the son of FSU offensive line coach Rick Trickett. 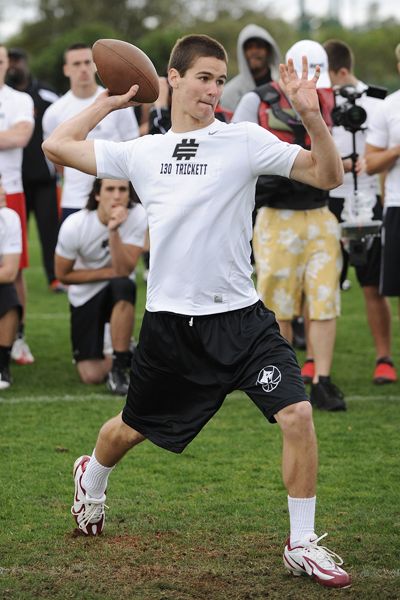 Come inside for some video, and why Clint is an excellent pickup for FSU!

Clint is a very smart and accurate quarterback.

Trickett is a prime example of why projecting 17 year olds is not an exact science. He is the son of a coach and it shows. If collegiete coaches have the foresight to envision what he could be three years down the road they could have a very good quarterback on their hands. He is the definition of a late-bloomer and is dramatically undersized at this stage-- not necessarily in terms of height, but rather frame development. He has a lot of growth potential. Is a tough, gutsy player that plays with fire and is very competitive. Has quick feet and shows a smooth drop and balanced set up in the three and five step passing game. Shows pre-snap recognition and the ability to know where to go with the ball once he hits his plant foot. Can get rid of the ball on time and quickly with a smooth, over-the-top release that helps his lack of ideal height. Shows very good zip and velocity on shorter throws and just enough power to make the necessary intermediate throws from within the pocket especially if he is one time. He is a fundamentally sound prospect and this shows in his consistent mechanics and accuracy. Sets his feet and throws with authority. He is a deceptively, elusive little athlete with the foot quickness in the pocket to elude the rush and get out on the perimeter and buy time to find open targets. Throws well on the move to both sides, but not with the same zip as within the pocket and is tough enough to tuck the ball and get what he can with his legs even if that means lowering his shoulder. He plays with intangibles and moxie. Trickett is under-developed right now and really needs to get in the weightroom. He has a lean, light frame and you can see he has a high metabolism which likely makes it difficult for him to gain weight right now. Durability would be a concern right off the bat and so would his lack of ideal height. Overall, Trickett is easy to like and could project at the college level as a quality prospect once he has developed and matured. He is green, but comes from a football background and we like his ceiling for development.

However, this does not take into account the improvement Clint showed over the summer.  His arm strength would be considered good.  Did well at Showtime.  He has the most accurate arm in Florida, and, like I said above, most consider him the top QB in the state.  Clint is putting up gaudy stats this year.  Clint also has the added bonus of being a coaches' son, so he obviously understands the game very well.  Low bust potential.  Just puts the ball right where it need to be, almost Colt McCoy like.  Great understanding of the offense and makes outstanding decisions.

Another advantage?  He is a tremendous recruiter.  Clint has a very good relationship with many recruits, and will have a Darious Cummings like recruiting presence.  Many prospects in Florida know him well.  He has a very outgoing personality.

Comparison? A good comparison for Clint would be a more talented Riley Skinner, or a Drew Brees (guys who are very accurate).  Perhaps his best attribute is his football intelligence and savvy.  Trickett is excellent at reading defenses, as are most coach's sons who grew up around the game.  At 6'2" and 172lbs, he has a lot of potential to grow and could end up being very good.  It's extremely comforting that Arkansas wanted Clint, because their Head Coach Bobby Petrino is excellent at evaluating quarterbacks.  The negatives on him are a lack of size and maybe a lack of elite arm strength.  His arm strength reportedly looked better in his first game this year, as Clint has worked really hard on improving it (it has also helped that he has begun to put on weight as he continues to grow).  He will benefit from a Redshirt in all likelihood, and I wouldn't expect him to start until he is a Redshirt Sophomore.  He can easily put on 20 lbs between now and then.

The TomahawkNation.com recruiting map has been updated to reflect the commitment. As has the Recruiting Board.