After a wonderful experience in College Park, Maryland last year, I became hooked on the concept of FSU road game adventures. Hooked. Despite my season ticket holder status, the BYU game was circled on the calendar as the "must attend" game behind only perhaps Miami. The distance, the landscape, the unique culture.....it's a best-case scenario for the Seminole Road Warrior. 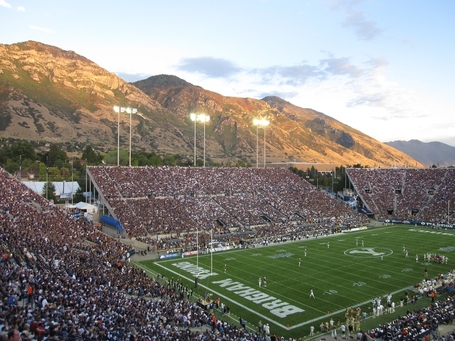 Having just arrived home from the weekend, there's not a single unpleasant moment to share from the time spent in Utah. Flying across the country after a huge win against a Top 10 opponent makes the travel a breeze, and I'm not sure this article would be so peachy if we fall to the Cougars. If you weren't fortunate enough to make the trip and wonder what you missed, feel free to keep reading.

The positive experience started before the plane even landed in the nation's 13th biggest state by area. I struck up a conversation with a wonderful BYU couple sitting in the row in front of me. They were warm, welcoming, and willing to answer all my queries. This was an unrelenting trend for the next 48 hours. The gentleman even offered to drive me to my downtown Salt Lake City destination, saying "it's not that far out of our way". I thankfully declined the gracious offer, but Wow!

As we walked through the terminal, I jumped on the people mover belt as they continued walking on the carpeted floor. I whisked past them and said, "this is what it's gonna look like tomorrow night!" I was right.

I've been scratching my head to describe the people and atmosphere of Lavell Edwards Stadium. It seemed less like a football game, and more like a catered family event. Couldn't tell you how many BYU people (fans young and old, stadium employees, security officers) genuinely said, "Welcome". It happened in the parking lot, outside the gates, in the stadium concourse, and everywhere in between. Some even wanted to shake our hands. How do you curse, swear, and smack talk to that? After the game, the pleasantries continued.

"Congratulations, thanks for coming"

Was this a marquee football match-up or a baby shower? During our quarter-mile walk to the car, crickets were literally chirping. Cars filed out like a funeral procession. Hooting and Hollering seemed inappriopriate. For such a huge victory for a team with something to prove, it seemed like violating society's norms to vocalize our joy. And after the warm greetings, the lack of hostility made it odd to "show Seminole spirit" outsides of the actual football plays. I'm not saying we didn't, but the level of outward displays were dramatically fewer than other venues I've experienced.

The stadium got loud at times, but I'd estimate the BYU grandstand sections stood about 3% of the time. Even when they were screaming on 3rd downs, they did it from a comfortable sitting position. Perhaps 10 consecutive Ponder 3rd down conversions to start the game was a factor.

Don't view this account as a gripe. The Utah residents were nice to a fault. At one point, my friend and I had a conversation discussing, "are these people capable of anger? Will anything we do upset them?"

I honor and revere Tallahassee and the Doak Campbell Stadium game day experience. However, the drive to LaVell Edwards Stadium is simply breathtaking. This picture was taken at 55 miles per hour about 15 minutes from Provo. 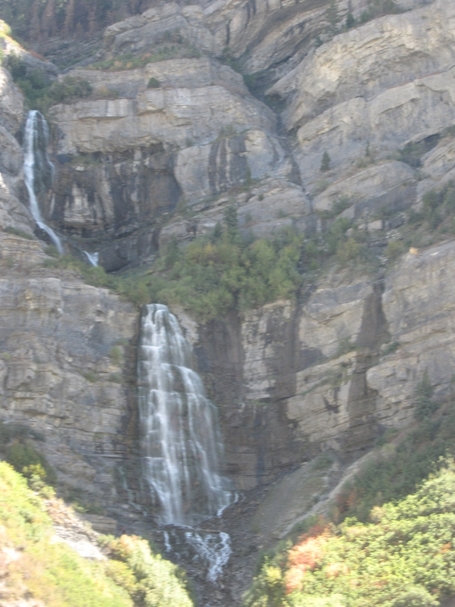 The weather was absolutely ideal. And that's not just because I survived the putrid Jacksonville State Monsoon the week prior. Shorts and t-shirts without being hot or cold. Gorgeous.

What about the altitude advantage? We experienced the unbelievable Park City, Utah before the game on Saturday (that place deserves it's own post. Amazing). It's 7,000 feet above sea level and your breathing is noticeably affected. The beer hits you harder, too! Once we drove down to Provo, which is about 4,500 ft. above sea level, things began to normalize once again. I doubt the Provo elevation was a factor.

From where we parked, there didn't seem to be much tailgating going on (relatively speaking). The aroma of barbecue was strangely absent from a college football game. Due to the laws/standards of the area, we drank our pre-game beverages like crackheads sneaking behind dumpsters to get their fix.

As posted before, the mountain backdrop of the stadium is surreal. I'm convinced the visiting team is placed opposite those gorgeous mountains to provide a visual distraction. If any players forgot their Ritalin before kick-off, daydreaming and drooling during the game is a distinct possibility.

Here's a 360-degree of the area from the top of the northwest corner of the stands.

A few moments before the first half ended, a female Seminole fan turned and shouted, "The next round of caffeine free Diet Coke is on me!". I thought she was kidding until we went for refreshments at halftime. Caffeine-free Coke, Diet Coke, and Barq's root beer were the options. Lavell Edwards is a drug-free stadium, apparently. The bathrooms were limited in number and small. To me, this indicates the designers anticipated limited liquor consumption during games.

If you look again at the first image of the story, there's 3 lightstands on each side of the field. The endzone stands have no light coverage and become dark as the sun sets. For 64,000 people in a stadium filled with fans sitting on their butts, things got fairly loud at times. But not loud enough to rattle Ponder and company.

Please keep in mind the following factors when reading my thoughts.

A) I have no note pad or voice recorder. I'm a regular fan with a point-and-click camera sitting in the stands.

2) I've seen no replays of the game, outside of the 2 plays ESPN showed last night (#7 team getting waxed at home. Unranked Notre Dame and MSU got 8 plays on ESPN). Everything I write is mainly from memory and from seats far from the field. I found out later that AJ made the last pick and not Dionte.

D) I was having a good time like a responsible adult should.  Any factual inconsistencies are honest mistakes rather than sensationalism and embellishment.

vi) Attending the game and the corresponding travel means I missed out on the thousands of excellent comments posted by TN members during and immediately following the contest. I'll try and touch on the things not covered yet.

We had a good feeling when the Noles received the opening kick and BYU's kickoff return team was comprised of 11 Caucasians.

The game-watching experience takes on a new dimension once you've digested FSUncensored unparalleled game previews. I was amazed at just how many things rang true.

The opening pass play of the game seemed oddly similar to a play Bud articulated in his Cougars preview. Too bad the defensive coaching staff doesn't read TN as it went for a big gain.

Tulane covered it so Hall kept it, but I don't expect to see this from BYU against FSU.

What about this prediction? Not sure it gets much better than this.

In the end, I think FSU can be successful making Hall hesitate, forcing him into difficult throws, pressuring him once he is comfortable, and keeping him from being perfect.  BYU will get their 28 points and 415 yards, but they will also have 2 or 3 turnovers.  I just don't trust this defensive coaching staff to both come up with and impart a cohesive, logical gameplan to FSU's players.  Thus, I can't see them Holding BYU under 24 points.  But 28 is reasonable because FSU will get to the ball faster than some of BYU's other opponents, and that could rattle Hall and his receivers.  I would not be at all surprised to see a tipped pass go for an interception the other way.

Geez. Thanks for ruining the movie, Bud. You told us that Bruce Willis was dead the whole time........screw you, man!

Oh, Defense. What am I gonna do with you?!

I was shocked to hear that BYU only needed to attempt 6 3rd-down plays last night. We really couldn't get a stop in the 1st 3 quarters. My voice is usually gone for 72 hours following a game, but it's fairly normal this Sunday. Why? Because there weren't enough 3rd-down plays for screaming purposes. I wish this defense was just average.

Plays that stick in my craw

I wanna be the fly on the wall during the sideline meetings of the defensive line. What goes on in those pep talks?

"Stick to the game plan, we'll get pressure here shortly"

"Try crawling between the tackles' legs. We gotta think outside the box, men"

I think the latter should be kicked around this week. Whatever they're doing isn't working. The first 2 plays of the game had #91 "starting" at right defensive end. I understand rewarding the guy who busts his butt in practice, but BYU had a Power Play on the first 2 snaps of the game.

There's nowhere to go but up. The talent's not gonna automatically appear, so something must change. We can't compete in the ACC schedule while giving the QB 6 seconds to throw every week. I can't imagine that this personnel change could be any worse than what we've got now: Mr. Alexander and Watson rushing off the edges, let Nigel Carr and Maurice Harris get their snaps at LB, move Markus inside or linebacker, let Dawkins try defensive end (where he belongs). These are cockamamie ramblings of a twisted mind, but can it get any worse? That's the point.

Why is Nick Moody, big bad Nick Moody, sitting on the sidelines while another certain "strong safety" gets ALL the reps? There HAS TO BE an ulterior motive, because "winning the game" certainly isn't the goal. We have somebody playing SS who presents no fear to receivers going across the middle, has terrible blitz bluffs that fool nobody, and is never in position to make an interception or disrupt the passing game. What gives, Mickey?

Thank goodness Ponder and The Boys came to play. Their backs must be sore from carrying the team.

It's All About the O!

Let's throw out some blind superlatives, shall we?

(if you listened closely, you can hear me name drop a Tomahawk Nation poster's screen name)

I love Ty Jones. Unquestioned #1 running back on the team through week 3.

Tavares could've had a TD on his first career carry if not for Richard Goodman's tackle. What a fairy tale scenario that could've been for TP. In the end, it worked out in our favor as we milked the clock and hit Caz with just 17 seconds left in the half.

Speaking of Caz....he catches everything. One of these weeks the opposing DC will recognize this fact.

Speaking of tight ends/H-Backs....Beau Reliford flashed that elite athleticism on that innocuous little catch and dive along the right sidelines. He's gonna be really, really good.

I Hope You Bought Low on Ponder

On other sites, many offseason threads made claims that  "E.J. Manuel will be the starting quarterback by the 3rd quarter against BYU". They could not be more wrong.

Seeing E.J. Manuel was such a treat. He looked quick, strong, fast and confident. If that pass to Rodney Smith (which looked like pass interference from 150 yards away) was completed for a long TD, I might've passed out.

Ponder stayed on the field for a few extra minutes giving television interviews then walked through the FSU fan gauntlet as a rock star. Here's the video:

The K-Man's Highlight of the Weekend

As the players and coaches exited towards the locker room after the game (like the last video posted), Jimbo darted up the Seminole fan gauntlet walkway towards the door. I repeatedly screamed his name and he stopped, turned, scanned the crowd for the source, and made eye contact with me. We exchanged Tiger Woods Power Fists from 30 feet away before he turned back and walked up the ramp. Hell, yes. 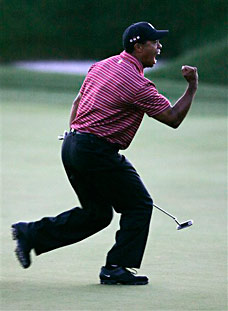