Welcome back to this week's edition of "The Final Score."  This is the weekly prediction column that our readers clamor for all week, where we the self proclaimed experts here at Tomahawk Nation will match our thorough and in-depth understanding of the game, our analytical skills, our wisdom, and our football knowledge, against our readers psychic abilities, or better yet "guesses" for Saturday's FSU expected CASTRATION of the USF Bulls. 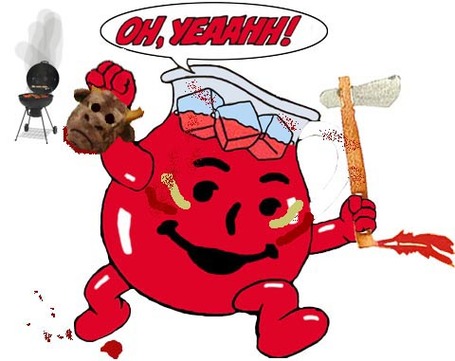 Once again many thanks to GonzoNole for his typically brilliant contribution. Next time you see a GonzoNole comment, please thank him for his contributions to this site.

Before going any further, I would like to congratulate loyal Tomahawk Nation reader hopnole23, who last week won the coveted shiny prize for his prediction and for coming closest to the final score in FSU's complete emasculation of the BYU Cougars.

Before getting into the predictions for this week's game, I thought I would share a few fun facts and tidbits about our Seminole's, now that we are a quarter of the way through the 2009 season.  Here are some interesting facts that you may or may not be aware of, and a few notes about this weeks game, which by the way has been officially dubbed and designated by Governor Charlie Crist as the State of Florida's 1st Annual Dyslexia Bowl (FSU vs USF).

Upon returning home after snapping  BYU's 18 game home winning streak, our Noles' are back in the national polls and ranked 18th after a two-week absence. This upcoming game will be the first meeting between these two schools, bringing to eight the total number of in-state teams our Noles have faced in our 63-year history. Additionally at this game, we will recognize our 1999 National Championship Team as a part of this season-long, 10-year anniversary celebration of the lone unbeaten team, and the first ever Wire to Wire #1 ranked National Champions.

Though FSU and USF are meeting for the first time, there is a lot of familiarity between the two rosters. A total of 40 players were high school teammates. That’s one player more than the high school ties between the Miami and FSU rosters in this season’s opener. Jacksonville First Coast and Belle Glade Glades Central top the list of connections for this game, with four players each.

HERE ARE SOME OTHER INTERESTING FACTS YOU PROBABLY ALREADY KNOW, BUT ARE WORTH REPEATING.

-The 54 points scored against BYU were the most scored by the Noles’ during the 17-game starting career of  Ponder against an FBS team, and the most since the Noles’ defeated Western Carolina, 69-0 last year in his first career start.

-The Noles scored 23 points in the second quarter and that was the most points scored in a single quarter since FSU scored 27 in the third quarter of its victory over Western Carolina to open the 2008 season;

-Ponder was a perfect six of six passing for 75 yards and three touchdowns on third down conversions. Ponder has completed 65.5 percent of this third down passes for 263 yards and four touchdowns in the first three games of the season. Additionally, he has rushed for 62 yards on eight carries and has converted six of nine third down opportunities while carrying the ball in the first three games of the season.  Ponder's total 3rd down conversions rate is 19/29, and against BYU the Noles converted 12 of 15 total 3rd down opportunities

Our little boy has come a long way, has grown up, and is now a man.

-During the summer, Jimbo promised us more tight end involvement and he has kept his word.  Our quarterbacks completed seven passes to three different tight ends last week.  Ponder completed five passes for 38 yards and one touchdown to Caz Piurowski and one pass for six yards for Beau Reliford.  EJ Manuel completed the first pass of his career to sophomore Ja’Baris Little who was lined up at the tight end position on the play, and it was the first time since Nov. 10, 1990 against Cincinnati that three Seminole tight ends (Reggie Johnson, Warren Hart and Dave Roberts) caught a pass in the same game.  Caz has caught 10 passes for 149 yards (both career season-best), five of those catches have moved the chains, and seven have come on touchdown drives. Caz has 2 TD receptions so far and his 53-yard reception against Jax St is the longest of the season for any FSU player, and the longest by a Nole tight end since Lonnie Johnson (78 yds. vs. Clemson, 1993).

-Ty Jones got his first career 100-yard rushing game (108 yards on 12 carries and one touchdown) and it marked the first time since our victory over Miami in 2008 that Florida State had rushed for more than 300 yards in a single game (310). It also marked the first time since that Miami game that we have outrushed our opponent by more than 200 yards in a single game (310-51/+259).  In addition, it was only the 6th time since the beginning of the 2000 season that FSU has rushed for 300 yards or more.  We are undefeated in each of those six games.

-Our Noles held the ball for 39:51 of the 60 minutes (65.8 percent of the game) and this overwhelming time of possession advantage led to the Cougars running only 53 offensive plays. It was the fewest offensive plays allowed by the Noles’ defense since limiting Duke to 50 in a 25-6 win on Oct. 27, 2007.

-The Noles were a perfect eight of eight on scoring chances from inside the red zone against BYU  (seven touchdowns and one FG) and we have converted 10 consecutive red zone opportunities.

-Ponder completed 21 of 26 passes and was interception-free for the fourth time in his last six starts. He has not been intercepted in eight of his 16 career starts. The Seminoles are undefeated (8-0) when Ponder completes a game without throwing an interception.

-The Noles are averaging only 6.6 penalties in the first 3 games and if they can maintain, we are on pace to be the least penalized Florida State team since 1995.

-Dustin Hopkins either kicked seven of his nine kickoffs out of the end zone, or where downed in the end zone, and only 2 kickoffs were returned for a total of 23 yards.

-Through the first three games, 11 true freshmen have seen action.

Enough of the past, it's time to get on with the USF predictions, after you hit the jump.

BEFORE HEADING BACK TO TAMPA AFTER THE SEMINOLES CASTRATION OF THE USF BULLS, THIS DEPRESSED USF FAN BIDS FAREWELL TO WHAT IS LEFT OF HIS BULLS TEAM. 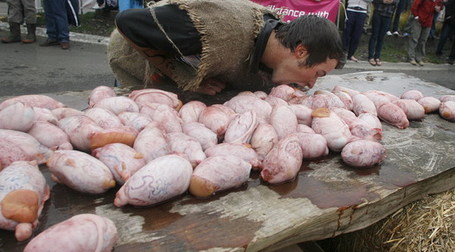 AND FOR THOSE OF YOU FORTUNATE ENOUGH TO BE ABLE TO ATTEND THE GAME, PLEASE HAVE A BALL.

This week it is a unanimous decision, and all of us authors are now kool-aid drinking, glass is half-full, homers, and GOOD GUYS.

Last week the BAD GUYS learned their lesson, were ridiculed, were humiliated, and the final slap to their faces occurred when ESPN called each one and offered all of them jobs predicting scores for the ESPN College Gameday program.  They have since repented, and since they seem sincere we have allowed them to continue on as part of the staff here at TN, but they have been advised that they are on notice.

And finally,
FSUn= TBA in the upcoming Game Preview.
Now we are eager to learn what the most knowledgeable Nole fans on any of the FSU boards expect the final score to be for this game.  Once again, the prize will be something shiny which will be given for the closest prediction (not spread) to the final score.  At the end of the season, the reader (or author) who has won the most Shiny Awards will receive the grand prize, a much larger and  shinier prize.

Finally, in our attempt to broaden our readers horizons, I leave with a short video clip which will come in very handy for the Nole fans following the game.

STOP RIGHT THERE!  I GOTTA KNOW RIGHT NOW, BEFORE WE GO ANY FURTHER. WHAT'S IT GONNA BE BOY?