MattDNole's Guide to Being a True Seminole

Share All sharing options for: MattDNole's Guide to Being a True Seminole

First of all, be sure to get your questions in for the BC writer.

Secondly, if you aren't already sick of USF, you will be by the time Uncensored is done this week.

It has become apparent to me that the large majority of our game-attending fanbase is comprised of idiots.  Consequently, I feel it is my duty (hehe... I said duty) to set the record straight, and inform the masses of the real way you should behave yourself at an FSU football game.  Follow the jump for a few easy steps that will ensure that you're never again the subject of my personal ridicule at an FSU game.

Let me start by telling you a story.  During the Revolutionary War, General George Washington was commander of the Continental Army.  In the first few years of the war, George was seriously getting his butt kicked by the British.  One of the few positives in the first three months of his Winter campaign was the incapacitation of General Cornwallis' top advisor, Colonel Cornelius Thornbottom, who suffered a severe brain injury when a cannon ball struck him in the head.  From that day on, Thornbottom lacked what one would call a "sharp mind."  Cornwallis, British high commander and a highly superstitious man, prepared a special chair to carry Thornbottom to every battle and provided him with an adequate vantage point so that the Colonel could witness all the action, even in his mentally deficient state.

One day, at a pivotal point in the battle, Washington was prepared to sound retreat.  A loss in this battle would have signaled sure defeat for the Continental Army, but Washington felt he had no choice.  Just then, a slightly incoherent Thornbottom stood from his chair, threw his hands in the air, and sat back down.  The British army, somewhat confused by the gesture, turned around to see what was happening behind them.  At that moment, Washington seized control and pressed forward with his cavalry, scoring a major victory and crippling the British stronghold in Roanoke, Virginia.  From then on, in each battle, Washington would direct an associate to stand, throw his arms in the air, and sit back down to remind the men of the British idiot that had won them the battle.  The tide turned and the Colonies won the war.  In personal letters, Washington confessed that it wasn't his military prowess or the skill of his men, but the folly of Colonel Cornelius Thornbottom that led to independence.

The moral of the story is this: If you do the Wave in the 4th quarter of a close game, then you must be brain dead.

No matter what just happened on the previous four goalline plays, if the defense allows a 99 yard TD drive True Seminoles know it's not the offense's fault.  We don't need you to blame Jimbo Fisher for allowing that 80 yard pass to the wide open receiver down the middle.  Keep in mind that a field goal there would have been WAY to close for Dustin Hopkins anyway.

PS- He can't hear you on the top row of section 7 anyway.  Screaming in the ear of the guy in front of you doesn't accomplish much.  May I suggest a letter, or perhaps an email expressing your concerns?

If you take out your keys when the band is playing the 4th quarter song and we are losing 14-0, you are not a True Seminole.

True Seminoles have never, and will never, care about the score of the Indiana-Michigan game.  Stop trying to force us to, Mr. ABC 27 Sports Guy.

True Seminoles realize that this article is getting dangerously close to a BillFromTampa post.  They are afraid.

True Seminoles don't say "What What" after the spelling of F-L-O-R-I-D-A S-T-A-T-E.  That's just ignorant.  They also don't do that extra oh-oh during the Warchant.

Your feelings about the website aside, True Seminoles do the Warchant.  Not the "Tomahawk Chop."  Not "The Chop."  We don't "Chop it up."  Leave that crap for the Atlanta Braves.

True Seminoles don't wear sunglasses that they got from Bret "The Hitman" Hart in 1988 while on the sidelines. 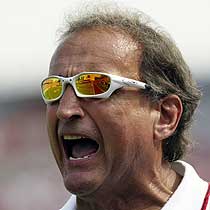 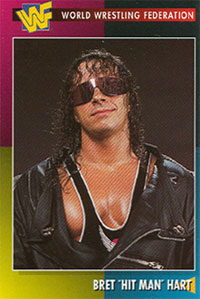 True Seminoles realize that sometimes their team does indeed commit a penalty.  Chanting profanities on national television is not always warranted.

True Seminoles realize what the score of the game was and don't laugh about it in their postgame press conferences. 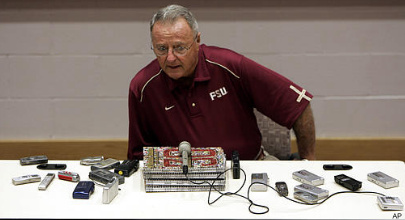 True Seminoles notice when players are wearing GIANT FREAKING KNEE BRACES and adjust their expectations for that player accordingly.

When True Seminoles offer their playcalling opinions, they at least lie about why they think it will work and do not say "Because it works on PlayStation all the time."

No matter how hilarious I think it is, True Seminoles don't rent a U-Haul trailor and park it in front of the Head Coach's house.  (Consider this my official plea of innocence if ever questioned.)

True Seminoles read Tomahawk Nation and feel superior to the fans around them because of it.  Discussions often end with "Oh, well you would know that if you read Uncensored's post on Tuesday.  But I guess I just can't have this conversation with you."

Well, those are just a few of the traits of a True Seminole.  Let me know in the comments if there's anything I've missed.