I got a call during my first class and the content was quite good.  FSU is going to host a kid named Brice Schwab for an official visit.  6'8" 320lb offensive tackle stud.  He is a JUCO, and the guy I spoke with believed he'd be a one-and-done type player, not that he would have only a single year of eligibility, but that he could be good enough to go pro after his junior season.  Lots of questions here.  He was committed to USC, which runs a similar zone-blocking scheme to what FSU runs.  FSU has two returning starters at tackle, but apparently Schwab is the type of kid you don't turn down.  This fits with the new FSU idea of competing for a starting spot at all times, which makes kids give a consistent championship-caliber effort.  Everyone had been recruiting him like he was a SoCal kid because he had committed to USC and went to a California JUCO, but he's a country coal-miner family type kid from Pennsylvania, and could mesh well with Trickett's attitude.  Here's some film:

Considering the size of 2011 commitment Trey Pettis (a huge stud offensive tackle commitment), and Trickett's comments that he'd take 300lb type kids as long as they can move.

The 2009 USA Today Defensive Player of the Year: 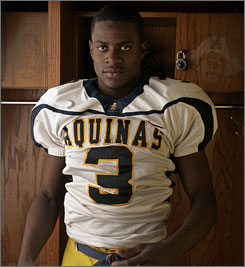 Why him: His athleticism and 4.3 speed for 40 yards made him a impact player on defense. Also ran for four TDs on 47 attempts, caught 16 passes for four TDs, and returned three kickoffs for TDs.

Why Florida State? "A lot of schools had a lot to offer. At the end, it was just my heart to go to FSU. Going there felt like a natural adjustment. On top of that, it was my dream school. I was always a Florida State fan growing up."

Football start: "I started playing Pop Warner 110 (pounds) when I was 12 years old. Before that, I always played around the neighborhood. I didn't come from a wealthy family. You have to pay for the shirt and all that and my mom, said, 'Oh, no.' One day, one of my friends from across the yard said that he would pay for it."

How did you get the nickname Frank? "That came from Little League football, the first time I ever played. I was a hard hitter. They starting call me the beast. I would never wrap up. It was always a hard hit. They just started calling me Frankenstein."

Season highlight: "Running back a kickoff against Byrnes."

What player did you pretend to be when you were little? "I always felt like (Baltimore Ravens linebacker) Ray Lewis."

On recruiting: "I just thank God because most guys in my shoes don't have the opportunity to go to any D-I team in the nation. My least favorite part of it is all the coaches coming after you."

After football: " I want to major in journalism. I always wanted to be on TV. I love talking about sports, and I like talking with people."

I know I'm a late on this, as genron told us about it a month ago.

Christian Green in the Army Game:

Christian Green (Tampa, Fla./Catholic) is the newbie to the position, having played quarterback his last three years in high school, but he has shown the most explosive quickness and burst after the catch. The cousin of former Florida State receiver E.G. Green beats press coverage with a combination of strength, physicality and short space burst.

Green is an excellent player.

With one highlight-reel play during Wednesday's practice, Green showed he could be as big a force at receiver in the future as he's been at quarterback in the past. During a brief intersquad scrimmage, he burst off the line hitting the seam like a jet, geared down to adjust to a late throw that was slightly behind him, made the catch without losing balance, burst quickly upfield, made one vertical cut to split the closing corner and safety and then high-stepped the final 10 yards celebrating the big play.

A note on safety prospect Jeremy Deering, who visited this past weekend.  I happen to think that he ends up in this class.

"Part of it is his size," Leto head coach Hugh Dehnert said. "He's about 210 pounds right now. He's 6-2 and it seems like he gets taller every time I see him. He's got breakaway speed. He has that acceleration and, on top of that, he's physical. He will hit you. He's not a cover corner kind of guy."

Ever wondered why Coach Coley has been hitting up Connecticut so much?

Like him at SDE.  Werner will be visiting FSU in a couple of weeks, and I hope this visit goes very well.

He's quite obviously an outstanding athlete for his size.  Coley has been putting in work on him.

Very glad that Holmes is apart of the FSU family.