One might argue that a win over the Yellow Jackets isn't essential for the Seminoles as a loss would result in a regular series split. However, this is a must win game to keep pace in the ACC and to build some confidence heading into Cameron Indoor Stadium. Tomorrow morning, the Seminoles welcome a confident Georgia Tech Yellow Jackets team to the Tucker Center for a rematch of the December 20th overtime thriller (sort of) in Atlanta. This should be a very physical game as the Seminoles look to defend their home court and the Yellow Jackets look for revenge. Take a look inside for an in-depth preview and tons of video break down.

Opponent's Site: From the Rumble Seat

It has been an interesting few weeks since the Yellow Jackets and Seminoles last met on December 20th. The Seminoles cruised through UT-Martin, Alabama A&M and Texas-A&M Corpus Christi only to run into a three point shooting buzz saw against Maryland and NC State, losing the last two games. The Seminoles returned home to survive a tough game with Virginia Tech. Georgia Tech cruised through the likes of Kennesaw St, Winston Salem St. and Charlotte only to stumble against the Georgia Bulldogs. They recovered with a win over Duke, only to lose to ACC leading Virginia. However, the Yellow Jackets are building some steam in the ACC with wins over North Carolina and Clemson. And right now, Georgia Tech would love to nothing more than beat Florida State on the road. While splitting the season series with Georgia Tech is a good thing, the Seminoles must win this game. With the likely bottle neck that is going to occur in the middle of the ACC, the more wins against the 'bottle neck' teams the better. See this article to explain the tie breaking scenarios in the ACC. Check out our preview for the last game to learn more about Georgia Tech, there is a great dialogue between us and the folks at From the Rumble Seat.

If we look at the Four Factors Evaluation, there isn't a lot of difference between these two teams:

Here is the likely starting lineup for the Yellow Jackets:

The Seminoles will continue with the lineup of Kitchen, Dulkys, Reid, Singleton and Alabi. Given the talent of Favors and Lawal, one might think that the Seminoles front court needs to have the game of their lives to win this one. However, one might argue that Dulkys, Kitchen, Loucks and Snaer are the ones who need to step up. Given Georgia Tech's propensity to collapse in the paint, Florida State is going to get open looks and they need to take advantage of those opportunities.

Now we'll take a look at some of Georgia Tech's offensive and defensive sets to see what the Seminoles need to do in order to win this game. You might be surprised that a lot of these images focus on Georgia Tech's defense. Florida State's defense isn't the problem; they need to put up points, so why not take a look at where they can exploit the Yellow Jackets.

First, we'll take a look at the Georgia Tech/Duke game. The image below shows the first offensive set that the Yellow Jackets showed. They set up in a high, unbalanced 3-2 set, trying to establish the paint, playing a high/low game with Lawal and Favors. Lawal made a bad entry pass that resulted in a turnover. But, it's easy to see that they wanted to establish the paint early. 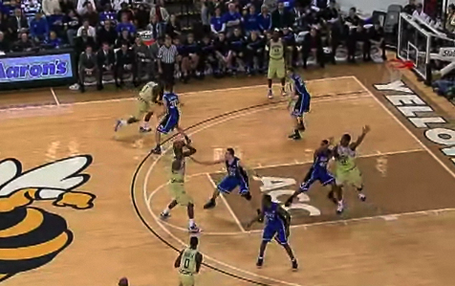 In this next series, Georgia Tech runs their more typical offense, which is really a 1-4 set that starts with a high pick and roll between Lawal and Udofia, as seen in the first two pictures. Get used to seeing this as the Yellow Jackets run a lot of this set and use it as a way to get the ball easily inside to either Favors or Lawal, whichever one isn't involved in the high pick and roll. 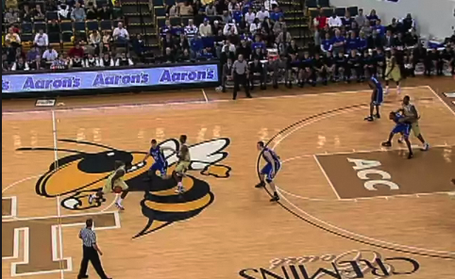 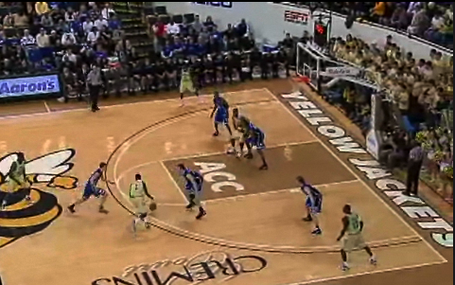 Now, Udofia starts to drive at the heart of the Duke defense. Duke, like Florida State is a very big team that plays a lot of man defense and defends the paint well. In the next image, look at how Duke collapses on the paint. Look familiar? It's what Florida State likes to do. 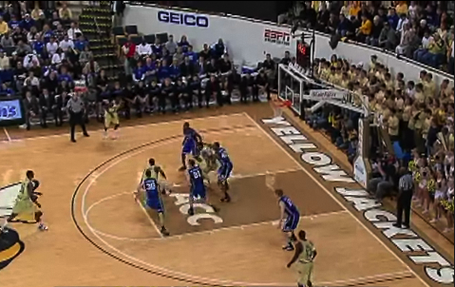 This play resulted in a turnover as Udofia got crushed in the paint, but look at Shumpert sitting at the top of the screen wide open for the three. This could be a dangerous defensive strategy if the Yellow Jackets are shooting well. The key to this will be to switch effectively on the high screen and prevent Udofia from getting into the paint. This will require Reid to force Udofia laterally to allow either Florida State's guards to recover under the screen and roll. Easier said than done.

In this next set we look at Georgia Tech's defense. As you go through these images, all of which are from one possession for Duke, look at how aggressive the Georgia Tech defense is. They like to double team a lot. 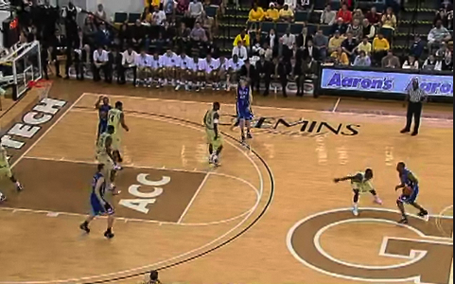 In the next image, look at how loosely Favors plays Zoubeck as he gets the ball. This is a common scene. Favors, and the Yellow Jackets like to protect the paint. This is where Reid or Gibson could have a great game. Hopefully, all of Florida State's big men will take advantage of these open looks. However, they shouldn't get in the habit of floating this high. Florida State needs to establish the paint and dominate on the blocks. 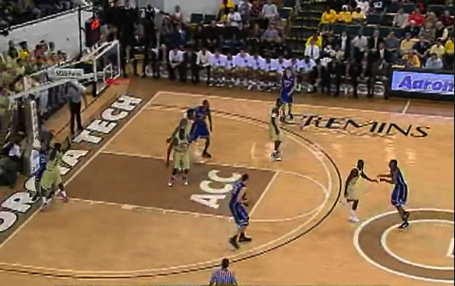 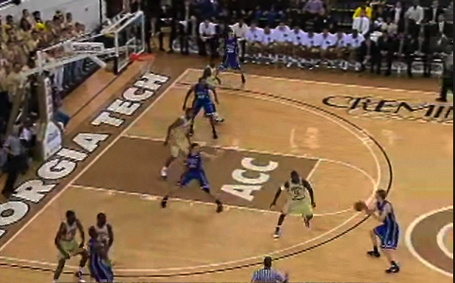 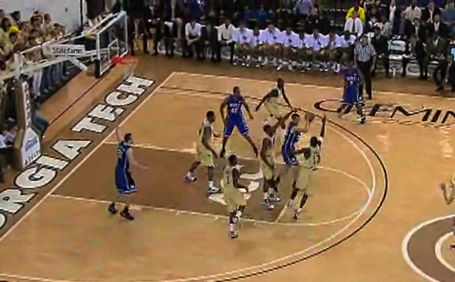 Look at the picture above and how the Yellow Jackets really collapse on the ball. Jon Scheyer has the ball but look at Nolan Smith on the top of the image and Zoubeck on the low block. Florida State needs to be patient and not turn the ball over. Because, watch as Duke moves the ball back around leading to the last play. 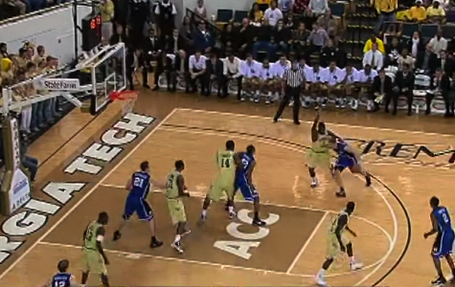 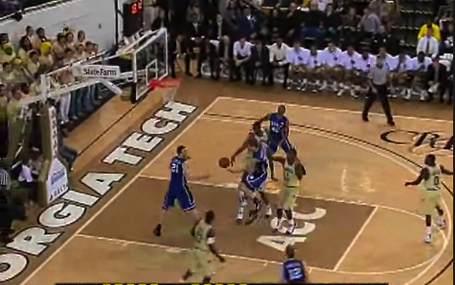 They collapse on Singler in the picture above, Zoubeck gets left alone, and Zoubeck gets... 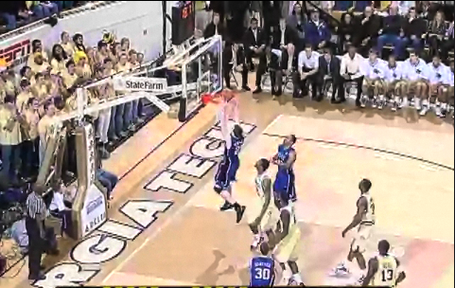 The poster play, which is noted by the bright screen as all the camera flashes went off. Those images are all from one possession for Duke. The Seminoles have to be patient. Given the fact that Georgia Tech wants to trap and collapse in the paint, guys will be open. You just have to move without the ball and deliver the ball.

Now let's take a look at Georgia Tech's game against UNC. UNC starts the possession with the ball high on the wing, and watch as they pull Georgia Tech's defense high with a number of screens off the ball. 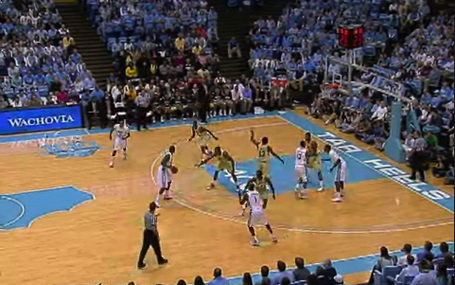 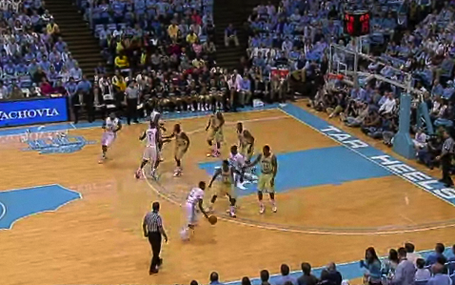 As soon as the defense gets pulled high, Larry Drew drives to the baseline off the wing and beats Shumpert off the dribble. 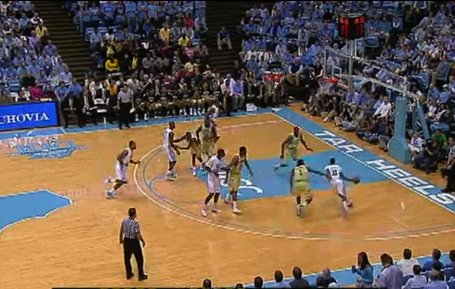 Favors comes down to help and the rest of the defense doesn't rotate, leaving Ed Davis all alone on the low block. 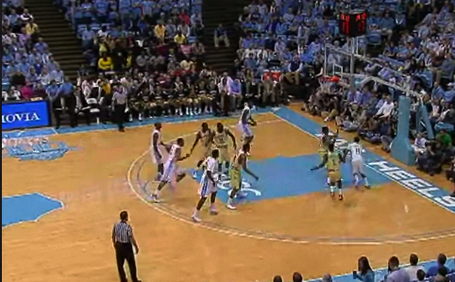 The play resulted in an Ed Davis dunk. This shows, along with the series above, that Georgia Tech can be late on switches and playing help side defense. Florida State has to move well off the ball. If you recall from the last game, they ran a couple of back door cuts off the wing that scored in easy baskets. In fact, the Seminoles ran the same play twice in a row on opposite sides of the court for baskets.

In this last series, we demonstrate Georgia Tech's athleticism and one of the ways they like to get the ball to their big fella Derrick Favors. This play starts with a Clemson miss that is rebounded by Lawal and passed to Udofia, who has the ball in the first picture. Where is Favors you may ask? 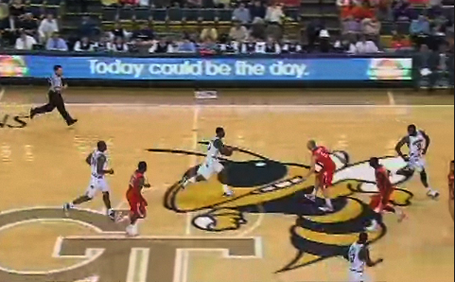 He's already down court standing in the paint... 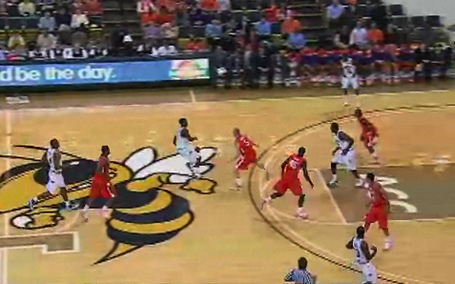 Udofia looks the defense off to get them rolling to the defense's left, and then he quickly delivers the ball to wing at the top of the screen. Look how Favors gets great position on Trevor Booker during that time. He gets Booker on his back and has an seals him from the basket with a big drop step to the basket... 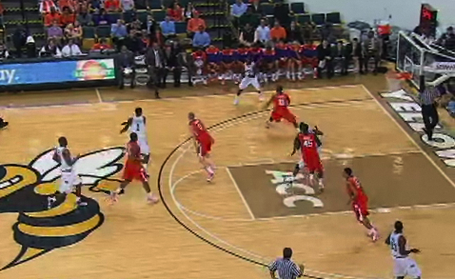 The ball gets delivered with a good entry pass to Favors, who turns... 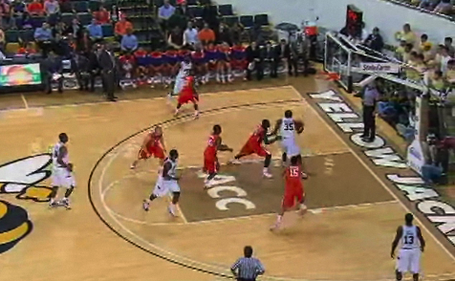 ...and finished with a monster dunk. This is an easy way for the Yellow Jackets to get the ball inside to their big men before the defense can get established, preventing the double team. Florida State has to get back on defense and prevent this from happening. Fortunately, Florida State does a really nice job of forcing teams to play in the half court, limiting transition points. Keep in mind, these are only snap shots and highlight potential 'break downs' in Georgia Tech's game. Georgia Tech is a very good team and these plays show a few ways that Florida State might be able to break down their defense and offense.

Keys to the Game:

2. Be patient on offense. But, play fast. Keep moving. Don't get caught with your feet in quick sand. Georgia Tech plays a lot of trapping defense. Use that to your advantage. Keep your head up and predict where your team mates will be. There are easy baskets to have if you're paying attention.

3. Long possessions. This is code word for no turnovers. Don't give them easy baskets. Be efficient. Georgia Tech is good at stealing the basketball, no reason to be making bad passes, stepping out of bounds or playing their style of game. They turn the ball over a lot as well...take it and use it to your advantage in transition. If you're not going to get an easy basket in transition, take your time. Wear them down. Get Lawal and Favors in foul trouble.

4. Protect Alabi. No early stupid fouls. He needs a lot of big minutes and another dominant game. Ryan Reid needs another career night.

Opponent's Site: From the Rumble Seat