The 9th ranked Florida State Seminoles took care of business this past weekend by sweeping a Georgia State Panthers team that had a historic 2009 season en route to the schools first trip to Regionals.  The Noles made this the 29th consecutive year that they have not lost an opening series and now move to 52-2-9 life time in opening series.  Going into the weekend the concern was not hitting but whether or not we could get quality starts from pitchers not named Sean Gilmartin.  Inside we will highlight each game and share some quality pics taken by our staff over the weekend. 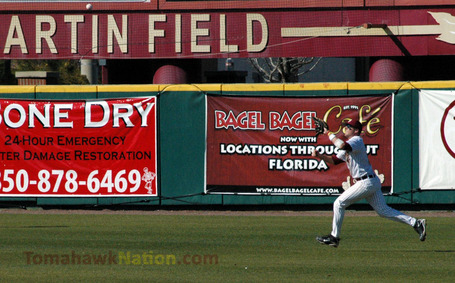 Game 1 got off to a bit of a rocky start with ace Sean Gilmartin struggling through the first two innings which included a 25 pitch 2nd inning.  Gilmartin settled down in the third and was able to locate his offspeed stuff and pitched 7 strong innings which included retiring 16 of the last 19 batters that he faced.  For a more in depth recap read 5th Ranked FSU Baseball Team Opens With a 11-3 Rout of Georgia State

Game 2 delivered the same results as game one, but with a different path. The Seminoles started the game with Geoff Parker on the mound.  He gave up one run in the first inning and it could have been more if not for a poor base running error, giving GSU the lead, however Florida State's bats heated up quickly after that. Stephen Cardullo delivered the first big blow to Georgia State with a 3 run homerun that was an absolute no doubter and FSU jumped out to an early 6-1 lead.  The Seminoles bats continued to stay hot throughout the course of the game, plating 14 runs on 15 total hits.

The story of the game however is rooted in run prevention.  We all know that FSU can only go as far as its starting pitching will allow it, this team needs to be able to rely on more than just Sean Gilmartin for quality outings.  To say that Geoff Parker was laboring Saturday would be an understatement.  He didn't get out of the fourth inning, with Mike "Lebben" Martin making the switch to Brian Busch after Parker loaded the bases with no outs.  Hopefully Parker's performance has more to do with early season rust and isn't exemplary of what we can expect this season. Busch came in and pitched well for 3 innings, which is a good sign as he has experienced arm injuries in the past.  He is FSU's best pitcher out of the bullpen when healthy.

Note: FSU dual sport athlete Taiwan Easterling got his first start of the season at DH, going 2-3 with a run scored. 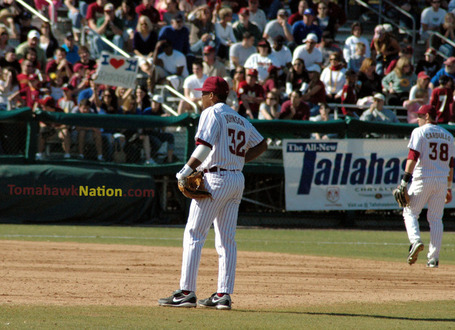 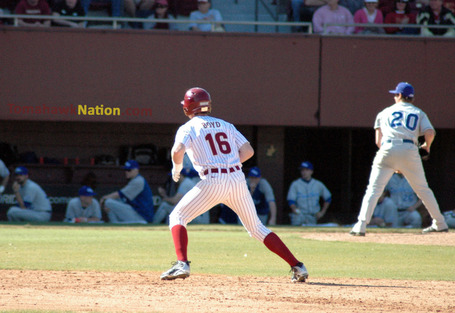 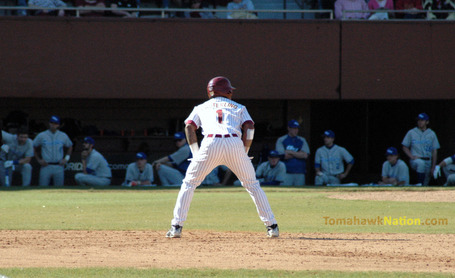 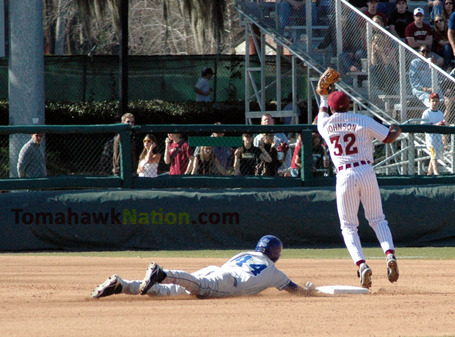 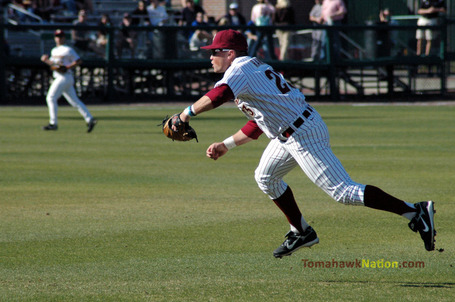 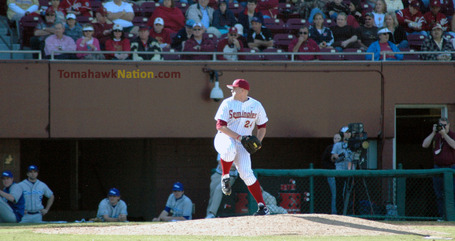 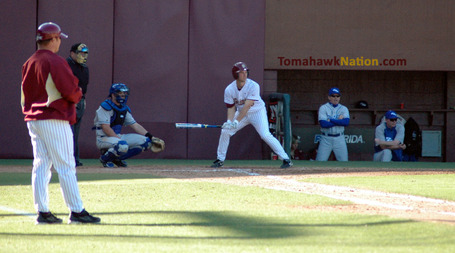 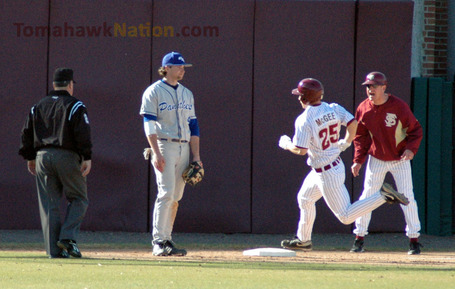 Game 3 was hopefully a preview of what we can expect from a completely healthy John Gast as he pitched the most impressive game of the weekend and his career.  He showed fantastic control and had 75 pitches over 6 innings while allowing only 2 earned runs on four hits, zero walks and one hit batsmen.  A stat that really jumps out in Gast’s line is the way he retired batters, 16 of the 18 outs recorded were via the strikeout or groundout.  If he can continue to pitch that effectively FSU should feel very comfortable about him being the Sunday starter. Two FSU newcomers pitched well out of the pen as Freshman Robert Benincasa and JUCO transfer Andrew Durden combined for 3 scoreless innings of relief.

Mike Martin put out what I think is his optimal lineup which featured Sherman Johnson at 3B, Justin Gonzalez at 2B and Stuart Tapley as DH.  Freshman Justin Gonzalez made the most of his 1st career start by going 2-3 with 3 runs, 2 RBI which included his first career homerun and Sherman Johnson 1st career start at 3B resulted in him going 3-4 with 2 RBI and a run scored.  Stuart Tapley also homered in the 2nd inning and FSU poured it on with 12 hits in a final score of 12-2.

All in all it was a good series for the Seminoles, none of the games were close which allowed Martin to substitute guys in.  Florida State continued to show great plate discipline by earning 24 walks and striking out only 13 times in the three games which should emphasize that bunting in the 2nd inning is absolutely ludicrous.  The relief pitching was also a bright spot this weekend by only allowing 2 earned runs in 11 innings while striking out 15 and only walking 5.

The Seminoles play at home this Wednesday at 4 PM against the University of North Florida Ospreys and Mike McGee is expected to get the start.