Share All sharing options for: Reflections on a Florida State Career: Rod Owens

"Tomahawk Nation (FSUncensored) makes a good point, that legally this is the first offense for (Rod) Owens, and should be treated as such. I agree, in regards to his enrollment at FSU, if any other student got a DUI it wouldn’t matter at the Monday morning class. But, there’s that other part to Rod’s FSU status, as a football player, and in my opinion, zero-tolerance should be shown here. SEND A MESSAGE TO THE PLAYERS."_ Scalpem.com

These words were blogged on a fellow FSU site on April 6, 2009. During the early morning hours following Florida State's annual Spring "Game", wide receiver Rod Owens was arrested for DUI while driving with his headlights off near campus. Although this was the first known screw up for the man beloved by teammates as "Old School", the FSU receiving corp could ill-afford another black eye:

-Preston Parker was dismissed from the team 2 months earlier after 3rd or 4th embarrassing strike.

-Corey Surrency and Bert Reed missed multiple games each during the 2008 season for violating team rules.

-5 FSU receivers were suspended prior to the 2008 Boston College game following a Royal Rumble-style brawl in the Student Union.

Fortunate for Rod, the Nole offense, and interested parties like this author, FSU lifted Rod's team suspension prior to the season opening against Miami. In return, Ruby Rod Owens carved out a pleasant place for himself in Seminole football lore.

SLUGGISH START FOR A SPEEDY RECEIVER

Rod Owens showed off his wheels at FSU before even joining the football team. As a senior at Jacksonville's Wolfson High School, Rod won state titles in the long jump, triple jump, 110-meter and 300-meter hurdles during a meet held at FSU's Mike Long track.

As a part of the 2005 recruiting class, the 6-foot, 183lb. Owens inked his letter of intent along with Richard Goodman and Fred "The Louse" Rouse. 5-star Rouse's career burned out quickly at Florida State and ended in a bloody mess at Lorenzo Booker's apartment less than 6 months after he stepped on campus. Both Goodman and Owens were overshadowed by the highly ranked Tallahassee product while checking in as low 3-stars in the Rivals.com database.

True freshman Rod caught a 5-yard TD pass from Drew Weatherford during meaningful first half minutes against the Citadel in 2005, Rod's second game as a Nole. He finished the season with 9 catches and tore his ACL following the ACC Championship game against Virginia Tech. After a redshirt season in 2006, Owens returned to the field in 2007 but only managed 21 catches and no scores over the next 2 seasons as a role player.

The redshirt senior found himself at a serious career crossroads while sitting a Tallahassee jail cell during the early morning hours of April 5th, 2009. 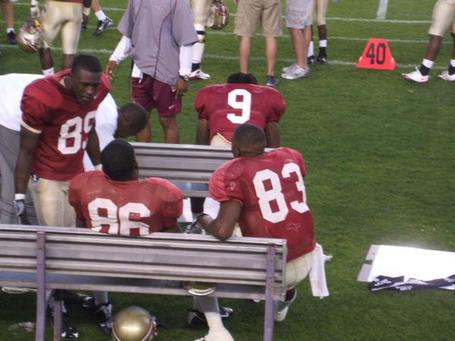 (Picture above: #86 Rod Owens sitting next to Bert Reed hours before his arrest. Photo courtesy of TRMNole)

After the jump, find out how Rod surprised everyone with a standout senior season that ranks favorably amongst FSU's Rolodex of superb wide receivers.

Rumors emerged during the spring that Rod was bearish on himself and his role as football player at Florida State University during the Spring of 2009. Following a decorated high school career highlighted by 19 TD catches as a senior and multiple track championships, the transition to the next level wasn't going as planned. A debilitating ACL injury, a reserve role at wideout, and averaging over 5 losss per season is what Old School had to show so far.

Offensive Coordinator Jimbo Fisher was able to convince Rod that his talents were greatly needed by a team that lost 3 of its most productive receivers (Parker, Surrency, and Greg Carr). We'll never know what Jimbo said, but words of encouragement were enough to light a glowing fire under Owens. Rod was a dependable, prolific target for quarterback Christian Ponder during the fabled Spring scrimmages against FSU defenses. He showed up in excellent shape during summer testing and laid down a sub-4.50 forty yard dash time. Seminole fans almost unanimously placed Jarmon Fortson, Bert Reed, and Taiwan Easterling as the top 3 targets for a rising Christian Ponder in 2009. Ruby Rod would have none of that.

(The author was unable to confirm the rumor that Ruby Rod Owens once shouted "Korben! Korben! Korben!" to warn Ponder of a blitzing cornerback. Note: the author may have created this rumor personally)

Rod got his nickname "Old School" from teammates due to his respectful "yes sir, no sir" manners and his blast from the past fashion sense. Rod is known to (gasp!) tuck in his shirt and wear white tube socks. His dance moves also harken back to golden era, according to unconfirmed sources.

Although he's got above average wheels and now proven dependable ball catching skills, Rod lacks the physical talents to succeed in the NFL. He doesn't have crazy mitts like Brandon Marshall and sometimes used his body to secure the football. Though blessed with speed, Rod lacks the skills of a deep-field aerial jump ball threat like a Marvin Snoop Minnis. He wasn't utilized in Fisher's bubble screens and isn't a physical mismatch like Jarmon Fortson. 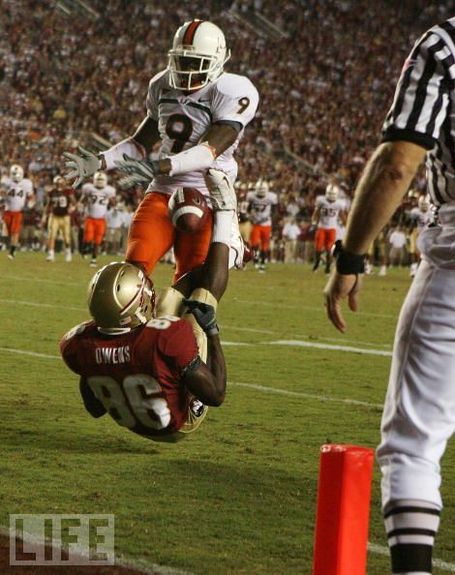 But never discredit Jimbo Fisher's ability to squeeze every last drop of production out of his roster.

While working both out of the slot and as a flanker in FSU's high-flying offense, Rod Owens proved to be the most consistent AND prolific pass catcher in the 2009 Seminole attack. Rod fearlessly went over the middle to make clutch 3rd down grabs along with fellow WR's Bert Reed and Taiwan Easterling (more in 2008 for Taiwan). When Christian Ponder needed to move the chains, he looked for #86 time and time again. Outside of his 1 TD catch performance against Georgia Tech, Rod was never held to less than 3 catches and 31 yards in any contest. He finished 2009 by edging out Bert Reed for the team lead in catches and yards (61 for 729 vs. 60 for 710) and scored 3 times to Bert's none. (For the record, Bert was on an incredible streak of catching long diving passes inside the 5-yard line without scoring to start the season)

Before the season, nobody predicted the previously pedestrian and recently incarcerated Rod Owens to lead this group of talented receivers in all categories except one (Jarmon's 4 TD's). But by the end of October, his stock was soaring.

The Hunt for Rod's October

The author witnessed Owens start off 2009 with 5-straight solid performances although he was held scoreless. As FSU trailed Georgia Tech by 2 scores late in the 4th quarter, The K-Man turned to his friend next to him at Doak and said, "Do you know Owens hasn't scored since The Citadel freshman year? He's due". Sure enough, Rod caught a 13-yard strike from Ponder and got off the scoring schnide once and for all. It was October 10th, 2009. His most previous TD was recorded on September 10th, 2005. If you're scoring at home, that's 4 years and 1 month to the day between scores. We don't have a resident Tim Kurkjian, but I'm assuming that's the longest time between scores in FSU history. On September 10th, 2005, New Orleans was less than 2 weeks removed from Hurrican Katrina's landfall and sitting under water. Better late than never!

Owens found himself permanently entrenched in the FSU history books 12 days later as Florida State squared off against North Carolina's elite defense on a Thursday night ESPN game. The Noles were stymied in first half and things looked grim. Trailing 24-13 late in the 3rd and sitting inside his own 2-yard line, Christian Ponder hit Old School on a pump and go down the right sideline for the longest score since Minnis' 98-yarder vs. Clemson in 2000. (I wish they would've brought out that Olympic Curling protractor device to measure which TD was longer). 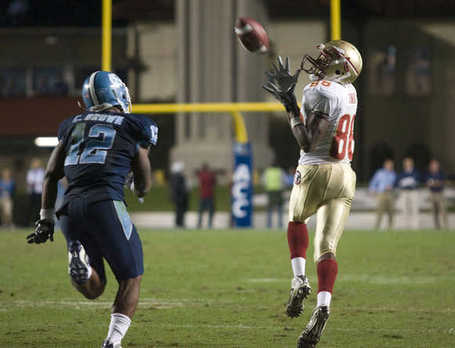 Rod finished the game with a 9 catches for 199 yards, soaring past his previous career highs. (199 yards is the 10th best single game haul in school history, besting Javon Walker's money making Gator Bowl performance) He finished off October on Halloween vs. NC State with a simple pitch-and-catch from #7 to score for the 3rd straight game.

During January's post-season football banquet in late January, Rod was named the Offense's Most Improved Player and also collected the honor of Special Teams MVP for Offense. Owens excelled as a gunner on kick-off coverage along with Louis Givens.

Stacking up against Seminole Greats

There's many variables to consider over 30 years of football at Florida State University, but the author was curious as to how Rod's 61 catch, 729 yard, 3 TD performance matched up vs. former Nole wide receivers' final seasons. And just like a local news anchor's pre-commercial teaser, the answers may surprise you!

After teaming up with Chris Rix as co-Croc Killers in 2003, P.K. skipped his senior season and was drafted #168 overall by Bill Belichek in the 4th round. 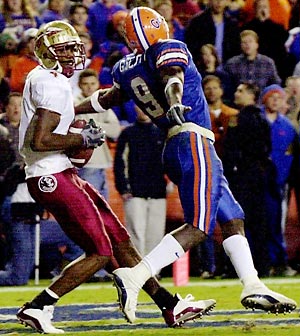 A key piece of the Seminole's 1999 undefeated season, Dugans made 2 huge TD grabs against Vick's Hokies in the Sugar Bowl. Ron was as dependable as they come for an FSU wideout while surrounded by incredible talent on offense. He was drafted by the Bengals at #66 in the 3rd round of the 2000 draft. 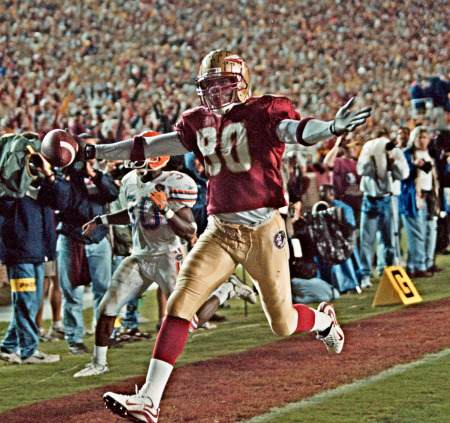 Nicknamed "Trub" for his mishaps off the field, Coles was arguably the 2nd fastest athlete to ever don the Garnet and Gold behind Deion. His top season statistically came in 1998 as a junior when he grabbed 19 catches for 397 yards and 3 scores. Coles shared the spotlight with Peter Warrick and Dugans among others. He was drafted #78 overall in the 3rd round by the Jets in 2000, and has experienced great success as an NFL wideout. 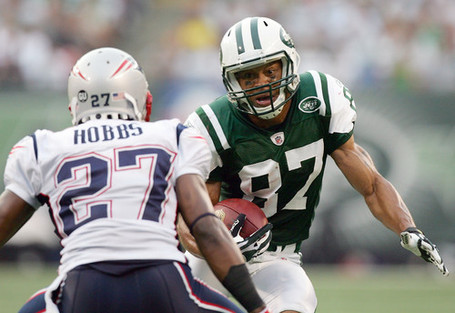 A rock solid receiver for 4 years under 3 different quarterbacks, Kez was a slightly built but surehanded receiver from Gautier Mississippi. Excellent body control, crisp cuts and Timex dependability were his M.O., as McCorvey was heavily involved in 2 of Charlie Ward's most memorable come-from-behind victories. Named a 1st team All-American by United Press International, Kez was drafted by the Detroit Lions in the 5th round in 1995. 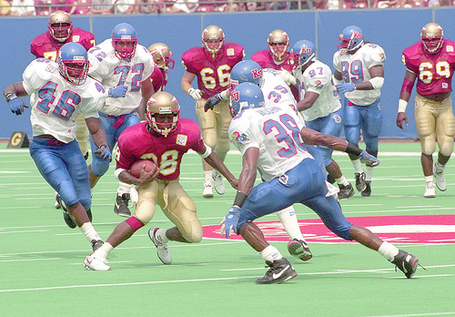 Arguably the most popular Florida State wideout that never made the NFL, Matt Frier from Live Oak left his heart and soul on the field for Bobby Bowden during his 4 seasons. He culminated his career triumphantly on the cover of Sports Illustrated as FSU knocked off Nebraska for it's first National Championship. 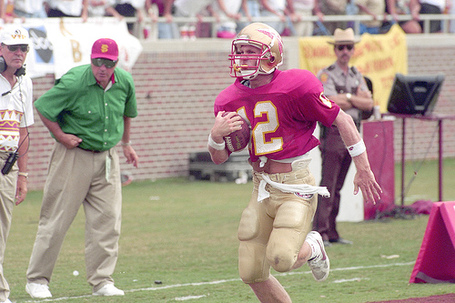 A former high school quarterback from Virginia, the 6'6" towering wideout parlayed his success at FSU into a 6-year career with Chuck Noll's Pittsburgh Steelers. The former Peach Bowl MVP terrorized NFL DB's in the redzone while catching passes from moustached signal caller Mark Malone in Steel City and winning the heart of loyal TN reader, NoleDan7. 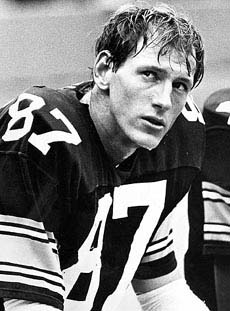 A Strong Finish with Fisher

Jimbo Fisher never gave up on the 5th year senior. Rod's wildly improbable senior season is a great example of Fisher's ability to recognize and develop talent to it's greatest capacity, and should excite Seminoles for what's to come once Florida State's program is shaped to Fisher's liking. (Remember, Rod was a Jeff Bowden recruit!) From Josh Reed to Christian Ponder, Jimbo's college coaching career is littered with examples of elevating student-athletes to unexpected levels of greatness. Although not as flashy in nature, Rod Owens' 2009 campaign is part of Coach Fisher's last masterpiece as strictly a college offensive coordinator. Not flashy, but that's how Old School rolls. 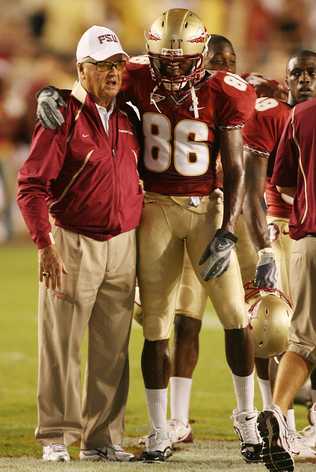 (For the record, here's FSUncensored's April 6th, 2009 rebuttal to the article's first quote which called for Owens' dismissal:)

If you want to send a message, change the system. Don’t do a knee-jerk reaction. Oh, and if you want to send that message, prepare to lose the top recruits. Once we have leadership at the top of the program, this stuff will die down......Owens has had 4 clean years