Share All sharing options for: #5 Ranked FSU Seminoles Baseball Beats Down the SEC

The Florida State Seminoles improved to 10-0 this season by beating the rival Florida Gators last Tuesday and steamrolled through the Georgia Bulldogs for a weekend sweep.  It was a good week for the ‘Noles offense scoring 48 runs on 51 hits and 32 walks to 25 strikeouts.  With those wins the Seminoles swapped places with the Gators in the most recent Baseball America rankings while the rest of the Top 10 remained the same.

Just for fun let's take a look and see how the FSU offense fairs against the rest of the Top 10. As you can see FSU is tearing the cover off the ball and is leading or near the top in every category.  These numbers are a little inflated due to the lesser competition we have played year to date in comparison to other top programs.  Now don't get me wrong, anytime we beat UF at anything I am happy and sweeping #25 ranked UGA should be impressive but inside we will explain why you should hold off right now on booking your plane ticket to Omaha.

It has been discussed in previous baseball threads that we should not put too much importance into baseball rankings and this became abundantly clear after watching this week's games.  The Florida Gators started the season ranked 7th and moved to as high as 5th primarily due to the program prestige and their #1 recruiting class, something that FSU has benefited from in years past.  UF has a young and inexperienced team that to FSU's credit took full advantage of.  The offense beat down UF's #4 sophomore starter before he could record an out giving #2/3 Geoff Parker a 7-0 lead before facing the following lineup. 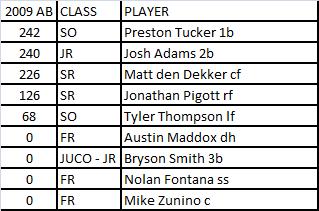 Those 9 kids accounted for just 40.5% of the 2009 total at bats and with that lack of experience Parker was pretty much in a position where he could not fail.  From the very first at bat UF was chasing pitches out of the zone in an effort to get back into the game and continued to show poor plate discipline the entire night.  Young teams struggle with plate discipline as shown in the above stats, Florida's BB:K ratio ranks last among Top 10 teams and is almost 4 times less than the ‘Noles.  Parker labored through the entire game lasting only 5 1/3 innings and if it wasn't for the excellent pitching of Brian Busch his night would have been much worse.  UF will be a better team by the end of the year but last Tuesday night they were completely outmatched by FSU.

"Georgia's starting lineup consists of three freshmen and six sophomores, and the infield has yet to feature all four projected starters. Currently, the Bulldogs are without freshmen starting shortstop Kyle Farmer (out 3-6 weeks due to a broken hamate bone in left wrist) and sophomore second baseman Levi Hyams (sore back). Farmer, who is the team's second leading hitter at .458, has missed the past three games while Hyams has yet to see action this season. Since Farmer's injury, third baseman Colby May has moved to shortstop while redshirt freshman Kevin Ruiz and sophomore catcher Christian Glisson have split time at third base. Glisson had never played third base in his career while Ruiz saw some time there in the fall. Meanwhile at second base, freshman Todd Hankins has started all nine games this year. Ruiz along with freshman Robert Shipman filled in the first five games at first base while sophomore Chase Davidson was out with an elbow injury. Davidson has returned to first base the past three games. Hyams might see action in the field during the FSU series and could be back full-time by next week."

The Bulldog offense was in similar shape to that of the Gators.  The lineups that UGA put out this past weekend consisted of only 5 players that saw any at bats last season which only accounted for roughly 30% of the team's total at bats.  Sean Gilmartin and John Gast took complete advantage of that and had little trouble in their outings.  The only offense Georgia could muster was off of underachieving Geoff Parker who we will discuss a little later.  38 runs against a SEC opponent who has made Regionals 3 of the last 6 years it is a definite accomplishment but in all honesty the Georgia pitching staff is nothing special and is only middle of the pack when it compares with other SEC schools.  I do credit the Seminole offense for lighting up MLB prospect Justin Grimm but outside of him the pitching staff has no one worth noting.  Their #2 and #3 starters had only 2 combined starts in 2009 and were completely outmatched against one of the best hitting teams in the nation.

The last and most important reason why it is too early to jump on the "Rosenblatt Bound Bandwagon" is the lack of a viable Sunday starter.  Gilmartin and Gast have been lights out this far and I do think they will continue to have success throughout the rest of the season but Florida State CANNOT expect to be a title contender without a #3 starter who can go out and consistently pitch 5 serviceable innings.  Junior Geoff Parker has been a complete disappointment in his 3 starts and has shown no signs of improving. Parker was initially thought to be the Saturday starter with Gast going on Sunday, but his inability to throw effectively has forced Gast into the Saturday role and FSU in search for someone who can throw competitively on Sunday without burning through 5 bullpen arms.  If Parker isn't that someone who is?  Until last night against at Jacksonville Mike McGee had inexplicably not throw a single meaningful inning which raised concern on how he would look in his first start.  To everyone's surprise he went out and threw 6 innings on no-hit ball striking out 8 and walking 4.  This was very good to see and hopefully he can continue to pitch with similar results as 2009 which with the way Parker is pitching could move him to the Sunday spot.

Lucky for the ‘Noles there are about 45 games left in the season where they have the opportunity to solve their #3 starter problem.  With their offense and the continued excellence of Gilmartin and Gast FSU should have no problem winning the majority of the series that they play.  All in all FSU is off to a great start, even better than I expected but they will truly be tested this upcoming weekend against the University of Virginia who is ranked #1 in the country and rightfully so in my opinion.  Come back Thursday for a FSU-UVA preview.

In back to back weeks a FSU player has taken ACC Player of the Week with this weeks honors going to Senior shortstop Stephen Cardullo.  During a stretch in the UGA series he reached base in 9 consecutive plate appearances.

Florida State beat Jacksonville 2-0 Monday night and carried a combined no-hitter into the bottom of the 9th inning.  I don't really believe in jinxes but as soon as the radio announcer mentioned the word "no hitter" the lead off batter promptly single up the middle.

‘Noles Freshman Robert Benincasa gets his 2nd start of the season in a Wednesday make up game against the University of North Florida.