On Wednesday we ran an article asking our readership to join us in predicting the 2010 season far too early.  The purpose of this exercise was to gauge the post-Spring feelings of the fan base.  Fans love to talk and predict in the off-season, and it showed. More than 440 readers responded to the survey, a substantial number considering it is only April.

So, how did our readership predict FSU to do against this schedule? Well the average prediction according to our proportional win shares method is 8-4.

The actual average according to the readers and authors was 8.36 wins as you can see, which can be rounded to 8-4. This would be a very good season for Florida State after going 6-6 3 of the last 4 years, changing defensive schemes, and facing a very tough schedule. Also interesting is that the median is slightly lower than the mean at 8.25. This means that there are more points below the average (more voters were below the average than above) however there were some very optimistic voters who pulled the average up.

How about the ACC Schedule?  The voters forecasted the 'Noles will do very well, predicting 5.75 ACC wins, which we'll round to 6-2 in conference play.

As you can see, again the data is skewed right with the mean being a higher number than the median. Perhaps we have more people who are below average pessimists, but the optimists sure make up for it, I'd say.  Actually, Bud Elliot's numbers resemble the averages of the group almost identically at 8.325 total and 5.825 ACC wins. I think it is safe to say he fears OU and UF more than the group as a whole, when looking at the ACC numbers.

Here are the line graphs of the votes as they came in. As we can see the votes bounce around somewhat, but on the whole it contains less variance than I expected. To me this means that most of the people who responded to the survey took it seriously.

Here are the two charts showing every forecast:

I'd like to thank everyone who voted and took the process seriously.  TomahawkNation attempts to talk about having reasonable expectations, and we couldn't have expected over 400 respondents who put thought into it in April.  After the jump I am going to delve into the numbers a little more.

Having discussed the overall feel of the average fan that took our survey, it is an interesting discussion to talk about where everyone fits in, because even though there were a lot of results that look very similar to the median and/or mean, clearly not everyone falls directly on that line. The easiest way to do that is to look at the standard deviation of the data.

In case any of you don't know, or need a quick refresher the standard deviation is a statistic that tells you how tightly all the various examples are clustered around the mean in a set of data. It measures the "average" scatter of all the data points around the mean.

The important thing to understand in this discussion is that approximately 68% of all the people surveyed fall within the first standard deviation and about 95% of everyone falls within two standard deviations of the mean.

So, this may look a little foreign to some of you who haven't had a statistics class in quite a while. What this says is:

My favorite part when looking at the overall scatter of points (click to enlarge) is when we had voters whose ACC total is greater than other people's total wins for the year. Truly shows the difference between voters. Because of the sheer volume of responses it is difficult to publish very many of the individual amounts, however I thought that a look into the top and bottom 5 % of respondents would be interesting especially because we had a few staffers on the bottom 5, although I believe the ricobert1 post is an impostor because he filled one out before that: 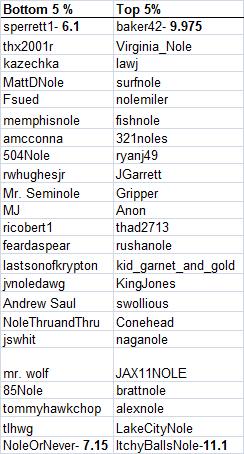 The last thing I would like to discuss about the results of our prediction exercise is the predictions of individual games throughout the season.  I respect the prediction of everyone, but one thing I would have liked to seen is a more realistic differentiation between games.  While UF is our rival, and everyone wants FSU to beat Oklahoma because it is a big out of conference game there just wasn't enough differentiation between those games, which are clearly Florida State's toughest, and the rest of the schedule.  The overall majority has UF and Clemson or UNC within 6 points of each other, and Oklahoma even closer, look! 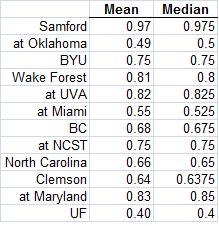 Look at the variation of results on the UF game alone. 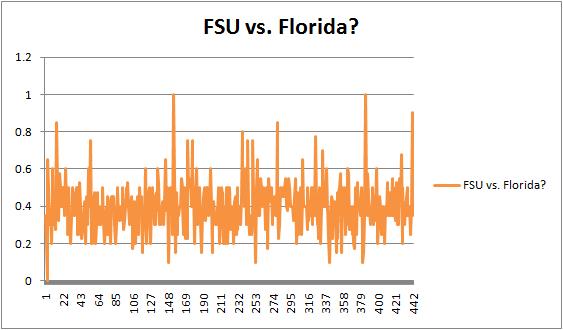 Overall, this was a very worthwhile investigation into the pulse of some of the biggest Nole fans on the planet, the readers of TomahawkNation.  Again, I'd like to thank everyone who participated.  We plan to do the same thing when we get closer to the season to see if anything has changed.  Perhaps a player makes huge strides, maybe the strength and conditioning gets these guys in great shape, maybe Kyle Parker goes to MLB.  In the name of fairness I am going to post my prediction. I was going to run it in the initial post but didn't want to influence other participants. My numbers mirror the median for total wins, however I give OU and UF more respect so my ACC total is slightly larger than the group. 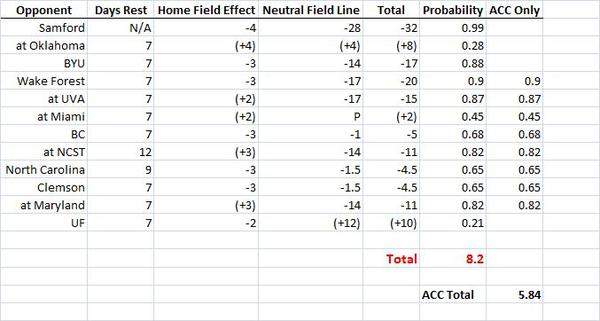 FSU Scheduled Itself Out Of 10-Win Consideration

Coach Fisher has repeatedly addressed the issue of scheduling.  He understands how the game is played.  He understands that FSU should play three cupcake games in the non-conference because it receives enormous credit for playing UF.  UF + 3 automatic wins is what the 'Noles need.  What FSU has, however, is UF, a game against a national power in Oklahoma, and a game against a consistently top-25 ranked team in BYU.  The OU and BYU games are potentially losable, and FSU needs to avoid scheduling losable games because it won't get credit for playing them.  The graph below shows the 10 toughest schedules from last season (before bowl games because teams don't schedule bowl games), and the record of each team in D1 games. 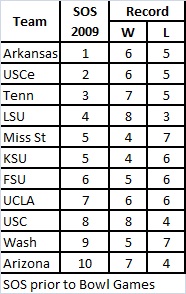 Notice anything?  You should.  Almost all of these teams were underrated by the media because they lost more games than many teams who played lousy schedules.  FSU will always play UF, Miami, Clemson, Boston College, NC State, Wake, and Maryland.  And most years the 'Noles play at least one of Virginia Tech, Georgia Tech, and North Carolina.  And if FSU makes it to the ACC Championship game in any given year they are forced to play an additional game against a high-caliber bowl team like Virginia Tech, Miami, or Georgia Tech.

Fisher is taking steps to remedy this idiotic scheduling, but changes to the schedule will come in 2011, 2012, and 2013.  This year FSU is likely to play somewhere between 8 and 11 bowl teams.  While that is a recipe for excitement, it is not a recipe for success.   Championship teams are not only very good, but they face few obstacles along the way.  We've been over this before but I can't help but hammer this point home again.  Look at the top teams from last season and the regular season schedules they faced:

As you can see, all but one of these teams had a schedule that was outside the top 20.  That begs the question, "were some of these 9-3 teams really better than some of the 7-5 or 8-4 teams?"  I'll submit that they were not.  I suspect most readers will take this into account in next month's projections.  I'll be very interested to see how the projections change and what event, if any, drives that change.

If you'd like to see what you and others actually posted, here's a read-only link to the spreadsheet, courtesy of GoogleDocs.