With the dust (hopefully) settling from the recent expansion news, we can look back at the most recent recruiting cycle for an indication of just how the BCS conferences may fair in the next few years. The 2010 recruiting cycle was a good one for the Seminoles. Though leadership is now consolidated in HC Jimbo Fisher and his staff FSU recruited with only half a staff for most of the year, yet was able to snag the 10th (Rivals) / 6th (ESPN) ranked recruiting class. Perhaps most importantly, FSU outrecruited the rest of the conference, something that could not be boasted of since 2006. 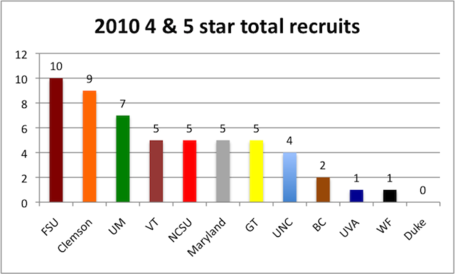 How about the conference as a whole, though? Compared with the other BCS conferences, how well is the ACC recruiting? This study will look at the elite prospects (4 & 5 star recruits by position) to see if the ACC is competitive nationally in terms of incoming talent. The results may (not) surprise you. 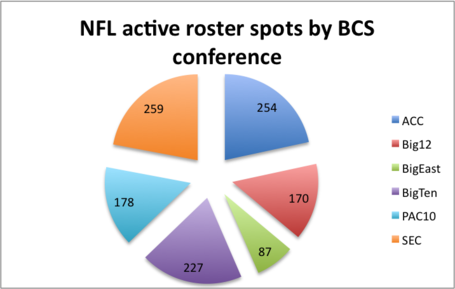 Admittedly, these conference rankings are heavily influenced by the presence of current individual "superpowers." The SEC, having won the last 4 BCS Championship games, feature schools like UF and Alabama (and LSU to an extent) that represent significant portions of the elite prospect totals. Winners recruit better (perhaps more easily), and the SEC is demonstrating that clearly. The Big 12 (Texas) and Pac-10 (USC) won the championships prior to that, respectively. FSU ('99) was the first and only ACC team to win a BCS national championship and appeared in the first 3 BCS championship games ('98-'00).

First, we'll take a look at the offensive side of the ball, starting with quarterbacks. After that, we'll see the conference breakdowns for OL, RB, WR, and TE.

This study is drawing solely upon recruits for the 2010 recruiting cycle, so there may be limitations due to sample size. Scholarship QBs rarely exceed 4 spots on the roster, and are often spaced apart to maximize redshirt and bench years learning the offense and getting familiar with the game speed. Many coaches still subscribe to the notion of making sure that QBs are at least RS-Jr. before hitting the field. However, in this age of early NFL draft entries and copious amounts of game-changing talent, early playing time for most positions is more the norm now than ever before.

Having said this, the multiple teams represented per conference should average out any potential phase-locks between recruiting cycle and QB roster composition cycle. 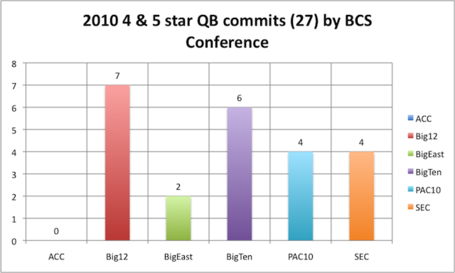 The ACC failed to pick up a single elite level QB prospect in 2010.

Interestingly enough, the ACC picked up only 2 elite QBs in 2009, and 4 in 2008, good for 6 in 3 years. FSU fans are counting their blessings with E.J. Manuel on the depth chart for potentially 3 more years, and even more so with coaches Demayeune Craig and Jimbo Fisher at the helm. 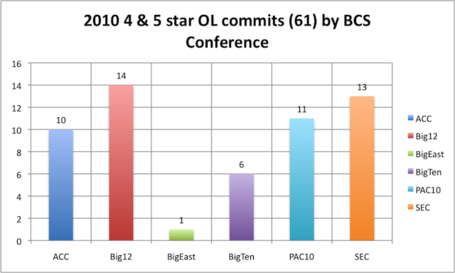 In one of the most important positions (and hardest to evaluate), the Big 12 is 2-for-2 in offensive conference supremacy, taking home 14 of 61 elite OL. Overall, there is some decent parity, except for the Big East, which will be a continuing trend in the other categorical breakdowns. 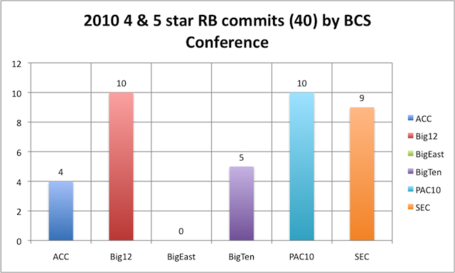 Now we get to the ball carrier and skill positions. The Big East pulls up the rear, while the Pac-10, Big 12, and SEC pull in on average about 1 elite RB per school. The ACC continues to be in the bottom of elite recruit rankings. 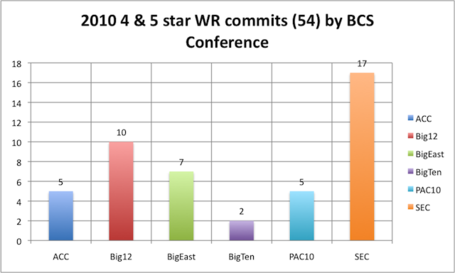 And now the bottom falls out. Talk about the rich getting richer. The SEC pulls in more than 3 times the amount of elite WRs than the ACC received, and almost doubles-up 2nd place Big 12. As we continue into the defensive rankings, we'll see this trend more and more. 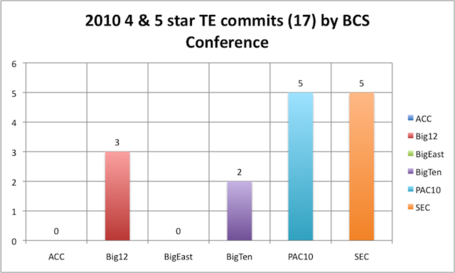 SEC and Pac-10 score, and the ACC and the Big East whiff. Not great news if anyone was ever interested in arguing that the ACC isn't that much different than frontrunner SEC in terms of talent. This is interesting, especially with Miami's historical pedigree at the position, and having put two into the draft just this past year. 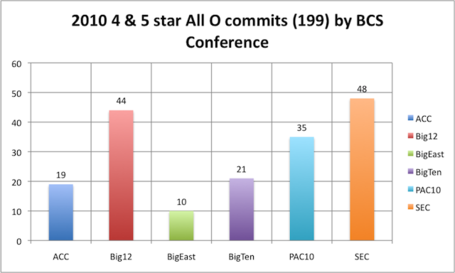 Those 17 elite WRs prospects really catapulted the SEC into the 1st overall in terms of numbers, resulting in the SEC capturing almost 1/4 (48 / 199) of all total elite offensive prospects that committed to a BCS school. The Big 12 has a strong showing, also. And the ACC is 2nd to last ahead the Big East, with less than half the total of the SEC numbers.

Another way to look at the offensive elite-level commitment difference: Per team capita, the SEC pulled in 4 elite offensive players per school. Big 12: 3.7 players. The ACC? 1.6.

Finally, a graphic that attempts to visualize the compositional breakdown of elite offensive prospects by conference: 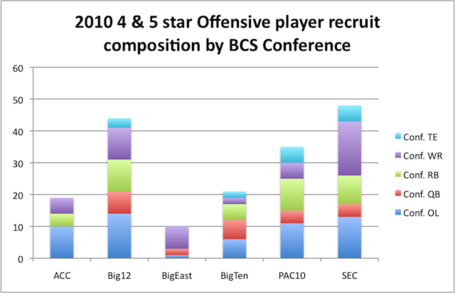 Next, the defensive side of the ball. We'll look at DE, DT, LB, and DB. 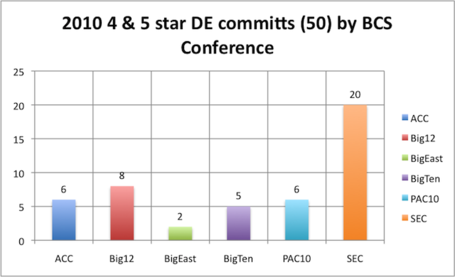 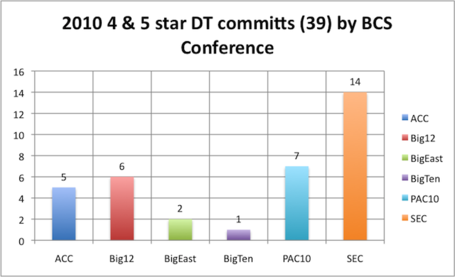 Just gross. The SEC took 40% of all elite DE and 36% of all elite DTs. The ACC in comparison took 12% and 13%, respectively. At least we did better than the Big East and Big Ten. Here's another way to look at the above graphics: 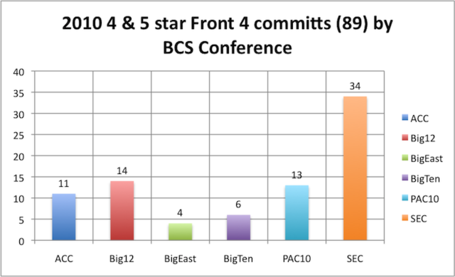 The SEC took almost 3 times as many elite Front 4 commits than 2nd place Big 12, and more than 8 times as many than last place Big East. The ACC drew less than 1/3 in comparison to the SEC. 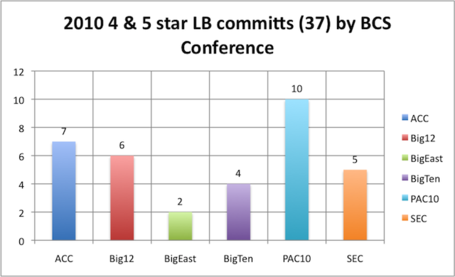 So the SEC's reign of terror pauses briefly this past recruiting cycle, and the ACC doesn't look like schmoes, pulling in only less elite LBs than the Pac-10. 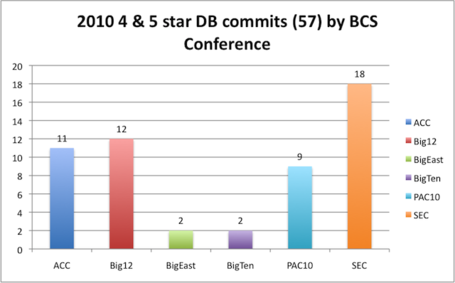 This is depressing. Next. 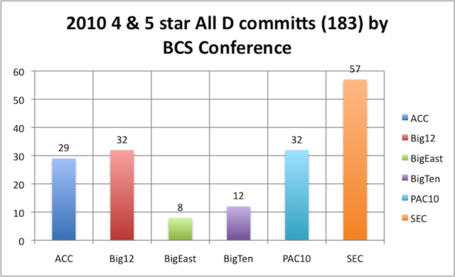 And the compositional breakdown by conference: 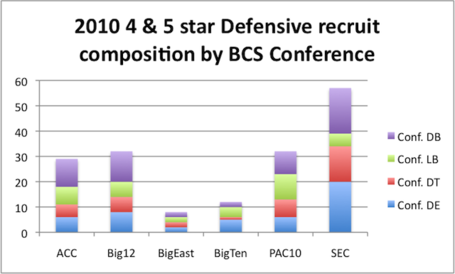 For all offensive and defensive positions, the numbers look like this: 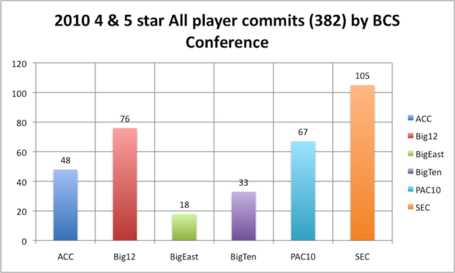 The SEC is clearly dominating in terms of sheer numbers, taking in over 1/4 of all elite BCS commits. Comparing the ACC elite recruit numbers (1st graphic at beginning of this article) to the SEC, visually we see the dominance from top to bottom between the ACC and SEC (click the picture to enlarge):

For comparison, FSU would be 6th place amongst SEC peers.

What do you think of the above results? Is the SEC hands down the superior conference recruiters? Are we seeing inflated numbers by Rivals for schools with active online fanbases (see: subscription selling)? Can FSU remain insulated from the SEC's recruiting prowess? Would joining the SEC improve FSU's recruiting, or weaken it? Regardless, it appears that for the time being the rich are getting richer.

Source : Rivals (Note: Recruiting classes based on commits rather than actual enrollees -- enrolled statistics not available until later this summer).  That's important because many SEC teams sign any more players for what they have room.  Only players who make it into school can impact the game, but all prospects are included in this analysis.