Bud has done some excellent video and snapshot breakdowns of various aspects of the offense and defense in the past including the UNC @ 2009 game (Here's your chance to use the search bar at the top right of your page!). But here, we'll be looking principally at the play of LG Rodney Hudson, who along with C Ryan McMahon and LT Andrew Datko comprise potentially the most formidable left-side OL play in all of CFB for 2 straight years ('09 -'10).

The accolades are unanimous and ubiquitous: Since stepping onto the field as a freshman in Death Valley (complete with coach Trickett telling him to "FocUs"), few linemen have garnered such praise as #62 OG Rodney Hudson. Most recently Hudson won the 2009 Jacobs Blocking Trophy, given to the best offensive lineman as voted upon by the coaches in the ACC (UVA OT Eugene Monroe won it in 2008, and was subsequently drafted 8th overall by the Jacksonville Jaguars). A lot of the times these awards are very much a result of politicking by a coaching staff, but it's hard to argue that here, especially as we delve into his performance at UNC in the film review forthcoming.

Hudson gave up a sack in that patch-work offensive line in his first game @ Clemson in 2007. And didn't give up another one until more than a year later, when he gave up 0.5 of a sack to an always-robust VT defense. He also went unpenalized the first 1,024 snaps of his college career (Source: ESPN). I can't remember the last "18-going-on-Alan-Faneca" collegiate lineman. Andrew Carter lists him as one of the 25 best players (#24) to ever see the field for FSU. ESPN's Mel Kiper Jr. offers this tidbit on Hudson:

One of the better zone blocking guards to come around in a while.

His seminoles.com player bio page reads as a veritable obituary for opponents. Even his senior year of HS he doled out more pancakes than an IHOP @ 2am on a Saturday. Hudson has been named to the pre-season watch list of the two highest honors given to collegiate lineman: The Rotary Lombardi Award, and the 2010 Outland Trophy. The Lombardi Award is given to the nation's best "down linemen, end-to-end, either on offense or defense, who set up no farther than 10 yards to the left or right of the ball, or linebackers who set up no farther than five yards deep from the line of scrimmage." The Outland Trophy is given to the nation's top interior player.

So how good is #62? The best way to answer that is by seeing him go against the best. And, arguably, the 2009 UNC Front 7 was as talented as anyone in the nation, as evidenced by their #11 ranking in FootballOutsiders.com S&P+ defensive ability.  Mel Kiper says UNC has the best DT, DE, OLB, & MLB in the country.

The following film review is a collection of plays sampled and compiled from the FSU @ UNC 2009 game, made available by Youtube user AloAloysius. I encourage you to watch along with my commentary -- both for your edifcation as well as to contribute meaningfully and correct myself or others. I'm a huge fan of the open source movement, and this potential for interaction (by you, the fan and participant, having access to the same information as the writer) is vast and rich. I believe this principle, rooted in the leadership here at TN and SBN, is what sets us apart as a whole -- rich interaction and the potential for education.

What better way to start a film review than with a little blast from the past in a quote from FSU's always-colorful, never-misunderstood resident bad-ass and OL coach Rick Trickett upon his hiring in 2007:

10 points for anyone who has ever repeated the phrase "Trust in Trickett" in regards to the future of offensive line play at Florida State. Daron Rose just spit up his coffee.

Author's note: The following analysis is not meant as a complete game assessment of Hudson's performance @ UNC. Rather, it is a "suggested" sampling of plays that involved him. Full assessment would require looking at all offensive snaps from a particular game. This is a lot of work for people who aren't paid to spend time on such things -- my apologies. 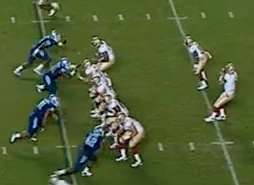 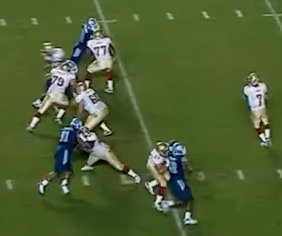 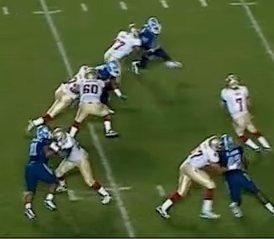 Tydreke's pedigree? Mel Kiper Jr. has had Tydreke as high as #1 amongst Junior DTs:

Powell caught my eye early on as a freshman, outperforming his much more heralded teammate Marvin Austin on occasion. He didn't have the type of sophomore year that I envisioned, but I still like what the future has in store for him.

- @1:30 - #97 Mullins eaten up and turned out, opposite the run. Great technique, even better tenacity. Completely took his man out of the play and used his opponent's leverage and commit direction against him.

- @1:54 - We're seeing potentially one of the best zone-blocking OGs at the college level. He takes a full reach step, accelerates downhill, engages and squares up his defender, #52 Quan Sturdivant. Hudson, with textbook engagement (hands and feet), pins Quan to the inside of the play while maintaining excellent position and tecnhnique. Quan can only watch, helplessly, as the play scoots outside his containment responsibility.

- @2:03 - Another outside zone left play. Same great step and downhill acceleration. #42 Robert Quinn (6'5" 260), lined up at OLB on the play, makes sure not to get beat outside and makes a beeline to contain the perimeter. Hudson takes what Quinn gives him and creates a nice crease for a good gain on the ground.

Quinn (along with Marvin Austin, Bruce Carter, and Quan Sturdivant) are among the players named to the 2010 Bronko Nagurski Trophy Watch List.

- @3:00 - Hudson passes the twisting DT off seemlessly to Datko and picks up, rather rudely, #94 DE Michael McAdoo, and occupies him long enough to allow Ponder to squeak by on the draw.

- @3:33 - Hudson is not phased by the interior DT twist, and rides his guy around the periphery of the pocket. If anything, UNC is wasting time in not gaining ground by using this method. Credit the whole OL for a great performance. (Yes, I know Zebrie's botched block led to a turnover during the game).

- @3:44 - More fresh kill for the R. Hudson meat packing plant. This time #48 ILB Kevin Reddick gets the bad news in an almost identical repeat of Hudson vs. Quinn @2:03.

- @3:55 - #91 gets to take the H train into the secondary. It's actually good technique by Powell here. Though, preferably, you want to ride the OL to the sideline as opposed to downfield.

- @4:15 is almost a chop block, or "Hi/Lo" block, as McMahon hits him high and Hudson cut blocks the DT. Good cut block, nonetheless. Hudson reaches top speed in about a step, which is beyond impressive for a lineman.

- @4:22 - #93 gets the better of Hudson here, extending his arms, wrestling Hudson off his base to his left, and scraping Hudson off to make the hit. Better hand placement could have neutralized Thomas here, but I'll give him his credit for technique.

In just one game, Hudson went against some of the best collegiate defenders: 2 current NFL players (DTs Cam Thomas & Aleric Mullins), 2 likely future NFL players (LB Quan Sturdivant, DE Robert Quinn) and 2 talented collegiate players (DE Michael McAdoo, LB Kevin Reddick). Note that overall Hudson did not get many opportunities against ultra-quick DT Marvin Austin, a 5* recruit that UNC was able to snag away from FSU. (While this still sucks -- if he's here, the 2009 defensive collapse may not have been as bad, and the wheels of motion may still be stuck in the proverbial mud).

In perhaps one of the toughest games of the year against arguably the most talented front 7 in CFB in 2009, Florida State's #62 Rodney Hudson put on a clinic for observers -- in technique and tenacity. From my point of view, the only thing left for Hudson to accomplish is adding additional upper body strength. No, really -- that's the only thing he's lacking. His balance combined with power and agility make him a fierce zone-blocking OG that can only get better as he gets his man strength. The only downside for FSU fans is that will most likely happen on the other side of the draft. In addition to the accolades mentioned above, Hudson is looking to repeat as only the 2nd FSU player to win the ACC's Jacobs Blocking Trophy two years in a row (Clay Shiver). Like Shiver, I expect Hudson to be a center at the next level.