What's So Great About Ponder? (the sequel)

Share All sharing options for: What's So Great About Ponder? (the sequel)

A story appeared last summer (I have omitted the author's name to save him the embarrassment of doubting Ponder)with the title, "What's So Great About Ponder?"  So now that Ponder is a serious Heisman contender, I'm bringing back that story but with a different tone.  The implied answer last year was, "not much."  But now that Ponder has erased nearly all questions about his prowess as a signal-caller, the implication has changed.  As in the original piece, I compare Ponder to other great FSU QBs of the last 25 years.  But unlike last year, he comes out looking pretty darn good.

What I'm doing here is very simple.  I've taken stats from a dozen or so years of excellent quarterback performance at FSU and plugged them into a chart.  Using the raw numbers and a few metrics, I put Ponder up against the likes of Ward, Wienke and Willis.  How does he stack up?  In 2008, not so good.  In 2009?  Well, let's see.

In completion percentage, Ponder 2009 rocks the house.  Only CW himself is better among Noles.

Where Ponder 2009 really shines for the Noles is in the amount of offense he produces for us each game. 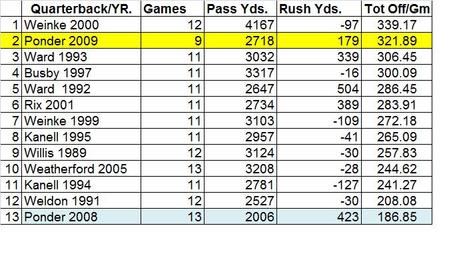 And talk about a turn-around!  He jumped from last place to 2nd in just one year.  What is the best explanation for this eye-popping improvement?  I'll let the readers hash that out.  But notice who Ponder is keeping company with in these charts . . .

There are a few metrics where Ponder falls into mid-pack or worse.  His QB Score and QB Score per play are low, by FSU QB standards, although he ties with Ward 1993 (Heisman) and Busby for 4th in QBSPP.  Why so low on QB Score?  (Chart is ranked by QBSPP, but Ponder does come out 6th on QB Score.) 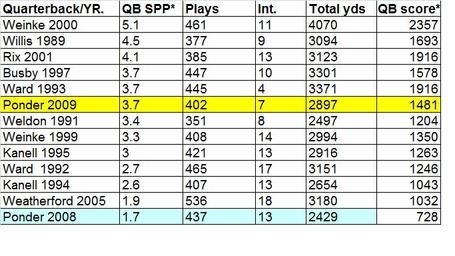 Quarterback score = (total yards-(3*total plays)-(30*turnovers))
QBSPP = Quarterback score/total plays
*I didn't have time to dig up the numbers on fumbles, so turnovers=interceptions.
For more on QBSPP, you can view Statistical Thinking in Sports, by Albert and Koning here.  QBSPP is, I suppose, primarily an NFL metric.  If you don't think it's a good metric for NCAA football, help me out by explaining why.

Ponder also looks mediocre in yards per play and points per play.  Why? 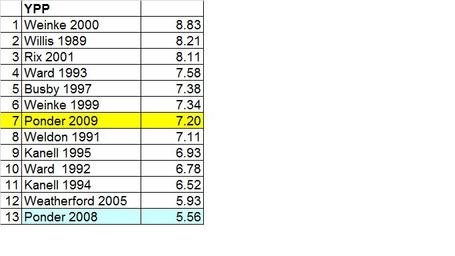 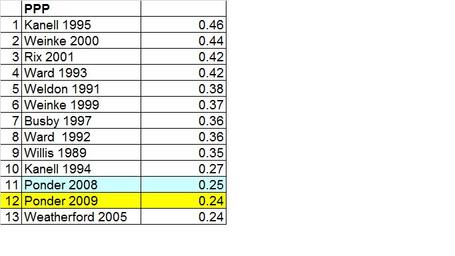 I saved this observation for last:  Ponder had a great season in 2009 -- one that almost stands shoulder to shoulder with our Heisman winners -- but he did it with a ball-and-chain shackled to his leg.  No other successful Noles QB in recent history has had to bear the burden of a defense that gives up 30 points per game.  Last year I remarked that Rix should be praised for bearing a similar burden -- his defense gave up more than 26 ppg.  Ponder eclipsed that feat last season. 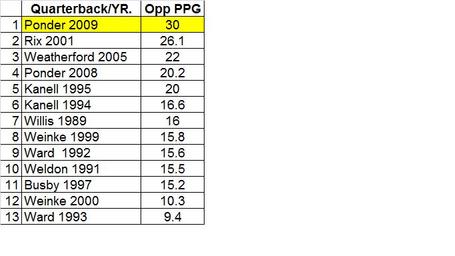 I think Ponder's accomplishments in 2009 (outstanding in any context) should take on added significance given the horrible defense he had to share the field with.

One question about all this that I haven't had the time to explore is, "How do the defenses we faced in 2009 compare to those faced in the other years on the chart?"  The biggest problem is finding national defensive rankings prior to 1999, which we would need to do a fair comparison across the chart.  I started looking at the quality of the *teams* faced in each year (determined by their final AP ranking), but this just doesn't give us the right picture.  Of course, if Ponder was facing tougher defenses in 2009 than other top Noles QBs, then his numbers are even more impressive.

So, here are a few questions for discussion (not that some of them haven't already been discussed, but its still fun to reopen the arguments):

1.  What is the best explanation for Ponder's dramatic improvement?

2.  Shouldn't we expect a Heisman-caliber QB to score in the top 5 on all these metrics?  What accounts for Ponder's lower scores in QB Score, YPP, etc.?