Tables are a wonderful way to show information; however, a picture does tell a thousand words so I thought I would use a chart from the quality field called a Shewhart or Statistical Process Control Chart to expand on Bud's article and track performance of the FSU defense.  These charts are used by quality and manufacturing professionals (and increasingly in other areas) to track the performance of a particular process.  What Shewhart charts do is differentiate  normal, random variations in performance(Common Cause Variation) from abnormal variations in performance (Special Cause variation).  They also can give you a sense of what the normal operating range of a process is and if there are any trends in performance with time.

The way that Shewhart charts work is through the use of control limits which are set at  +/- 3 standard deviations from the average.  If a point on the chart lies beyond the 3 SD limits, then there is only a very small chance( 3 in 1000 chance for a normal distribution) that the value in question is the result of normal process variation.  Basically, this is an abnormal result and worth investigating why it occurred. So how can we use these charts in analyzing the FSU D and what can they tell us?  What I have done is use a type of Shewhart chart called a U chart that is designed to handle count/unit data which YPP represents.  The U chart allows me to use data with different sample sizes( the number of plays per game). Applying a U chart to the offensive YPP for each of FSU's opponents this season, we get the following: 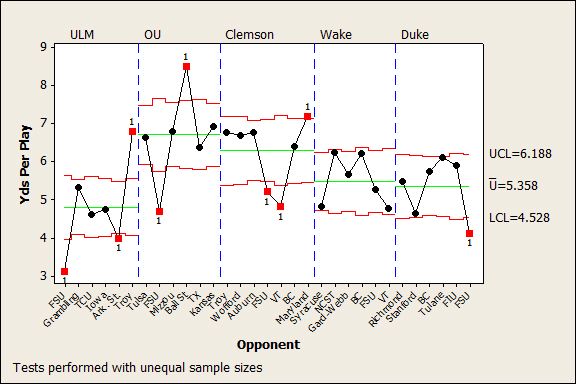 The chart reveals the following things:

A) The control limits in red show what the "normal" YPP range of FSU's opponents are.  Wake Forest, for example, averages 5.4 YPP on offense and should normally gain from 4.6-6.3 YPP every game this season. OU normally ranges from 5.8-7.6 YPP and Clemson normally ranges from 5.4-7.1 YPP.  Anything outside of these ranges would not be a normal day for these offenses. You can also see that the quality of the offense FSU has faced has decreased since the OU game.

2) Except for Wake Forest, FSU's defense has limited its opponents to a statistically significant low YPP(YPP lower than the lower control limit).   As Bud said, ULM, OU and Clemson had their worst (or 2nd worst) offensive performance of the season against FSU and Duke also had their worst offensive performance as well. Only VT did a better job than FSU at containing Clemson's offense this season.

D) The defense had their worst performance of the year on a YPP basis vs. WF with Wake nearly hitting their season average YPP against us.

I also charted the defensive YPP for FSU for the 2007-Present seasons.  The chart is below: 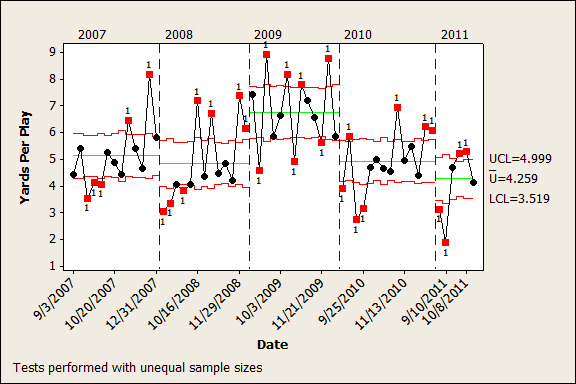 While I don't think I have come to any different conclusions than any of you regarding the defensive performance this season from a YPP perspective, I hope the charts give you a sense of what the normal range of performance should be for the offenses that our D has gone up against and a sense of perspective for how far our D has come.