Florida State has relied on a terrific offense the past few years, ranked in the top-10 each of the last two.  With the losses of Christian Ponder and Rodney Hudson--first and second round NFL draft picks, respectively--combined with replacing a three-year starting center and nagging off-season injuries to some returning linemen, there were plenty of questions about this year's offense.

EJ Manuel took over at QB this year bringing plenty of big game experience, success and promise of an added dimension.  An early exit against Oklahoma, due to injury, and lack of cohesion up front have prevented fulfilling that promise thus far.  Yesterday we looked at the defensive performance, to date.  Today we'll see how the offense has handled and adjusted to adversity.

Few of us expected FSU to once again field a top-10 offense, but we did expect this to be a top-25 group.  It would be easy to note the lack of a running game and conclude they are no where near top-25.  Before we jump to that conclusion--through just three games--let's compare the numbers so far to those they put up in non-garbage time 2010 ACC games.  What jumps out immediately is the lack of balance compared to last year, where the offense ran on 52% of their plays.  This year, just 33%.  Signs of trouble were evident in the two tune up games prior to OU and obvious thereafter.  So, how did Jimbo Fisher respond?  Pass, pass, pass.  In fact, they finished the Clemson game with 23 consecutive passing plays!  You could easily dismiss this as "abandoning the run" and foolishly go with the old axiom of "run to win".  Why in the world would he continue trying the same thing, expecting better results?  Bottom line, go with what's working in the game and fix what's broken in practice.

Clearly, the passing game has carried the load.  Taking more shots down the field hasn't had the expected detrimental effect of lowering the success rate (43.97% in 2010), but it has produced more big plays (3.88% Exp Passing Rate in 2010).  Keep in mind also, they've accomplished this solid passing attack without the benefit of the starting QB and most of the WR's.  The 53.85% SR on deep throws is ridiculous.  No, I don't have historical data to back up that subjective conclusion.  Still, it's ridiculous.  And if you had told us Bert Reed and Willie Haulstead would have four catches between them through three games....wow. 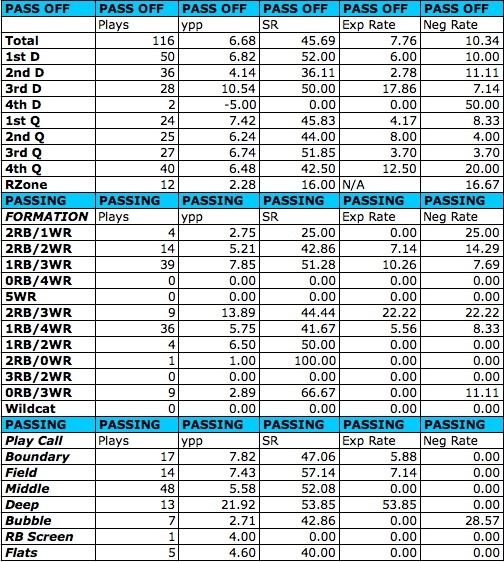 Now to the running game.  In a word, terrible.  There are big drop offs in every category.  The Noles averaged 5.50 ypp (4th best in the ACC) and a 45.87% SR (2nd best).  We've covered the problems with the running game in great detail, but these numbers highlight two points in particular;  EJ is the most important part of the running game, as it stands right now, and running between the tackles has been futile. 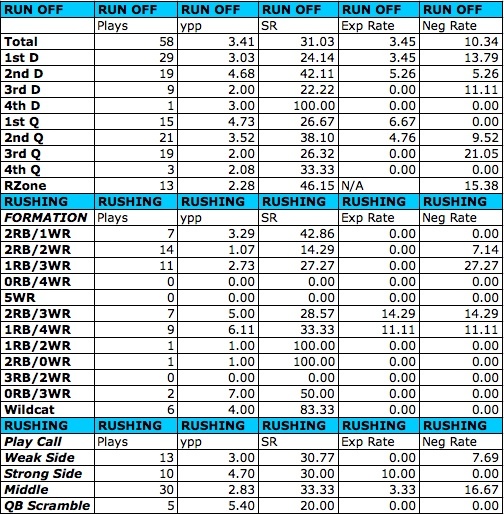 It would be silly to expect the running attack to remain this poor throughout the season.  I would expect a little better balance and ground support as the season wears on.  Despite being wounded and one-dimensional, though, believe it or not the offense has been effective so far.