The Florida State offensive performance through the first nine games was not up to the level we have come to expect and for the first time in at least three years Jimbo Fisher's offense is not the strength of the team.  Given the fact that the offense has put together the 29th best performance to date, this speaks volumes about the overall quality of his offenses at Florida State.  Just to add a little perspective to the moderate offensive downslide from top-10 status, take a few things into consideration;  FSU's leading rusher, receiver and pass-catching tight end are all true freshmen.  There is not a single returning offensive lineman playing the same position as last year, FSU has lost five of its top nine offensive linemen since Spring and one full-time starter that was playing high school ball last year.  Lastly, FSU went through the most difficult portion of the schedule with the backup, freshmen quarterback and between four and five scholarship receivers healthy enough to play.  Given those circumstances, 29th in the country sounds pretty damn good.

First let's look at the overall numbers, which do not include plays that occurred after games were mathematically over.  The metrics listed here are on a per-play basis and similar to those that comprise the S&P system.  The raw numbers produced by the offense are not significantly different from last year's.  Yards per play is up by 0.2 yards, success rate (SR) is down by 1.0%, explosive play (running plays >= 15 yards, passing plays >= 25 yards) rate is up 3.0% and negative play rate is essentially unchanged.  All of these changes make perfect sense considering the opening remarks about perspective.  Lack of experience leads to inconsistent execution, but with very talented playmakers at the skilled positions, some of that gets overshadowed by big plays.  With the overall stats being very similar to last year's, why the 22 spot drop in ranking?  Strength of schedule.  Last year FSU faced the toughest set of defenses in the country.  This year, 51st toughest. Appreciate last year's group yet?

FSU lead the ACC in virtually every 3rd down category last year, converting over 51% overall.  So far this year, 3rd down has been their most problematic down, yet they are #3 in conference play and 37th in the country.  It's also easy to recognize with these numbers that Fisher's offense has been less than stellar coming out of halftime. 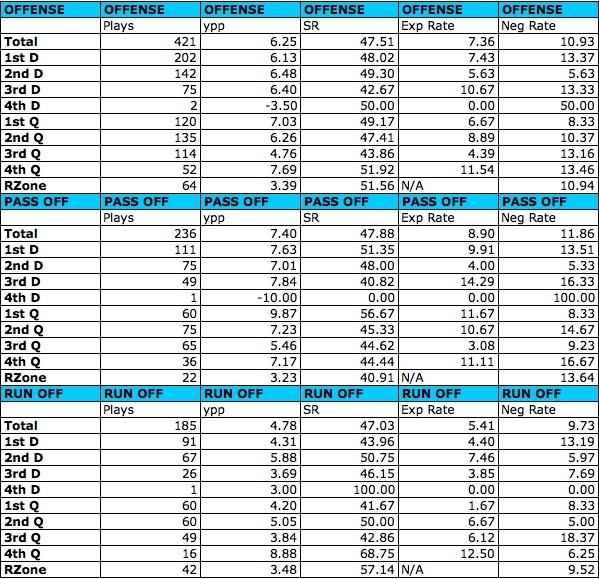 With the return of EJ Manuel, emergence of Devonta Freeman and some developing cohesion up front, the running game (#57 nationally) is in much better shape now than a month ago.  However, the passing game (#30 nationally)is still the strength of the offense.  As you can see in the following chart, staying on schedule makes life much easier for the offense.  FSU has been slightly below the national average, with standard running downs (SD) comprising 66.9% of their total plays.  The average is 68%.  The key point here is it's much easier to be "successful" in short yardage situations. 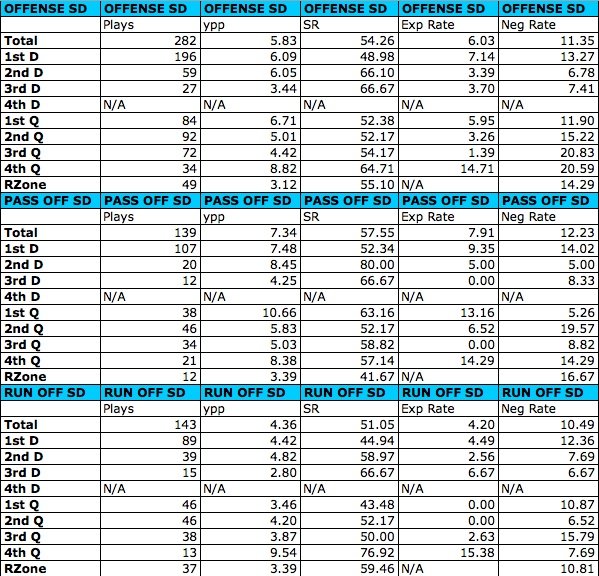 Trouble in the running game, particularly early in the season, has lead to less balance than usual: 51%/49% pass/run in 2010, 56%/44% in 2011.  As such, it should not be surprising that the three and four wide sets have yielded the best results. 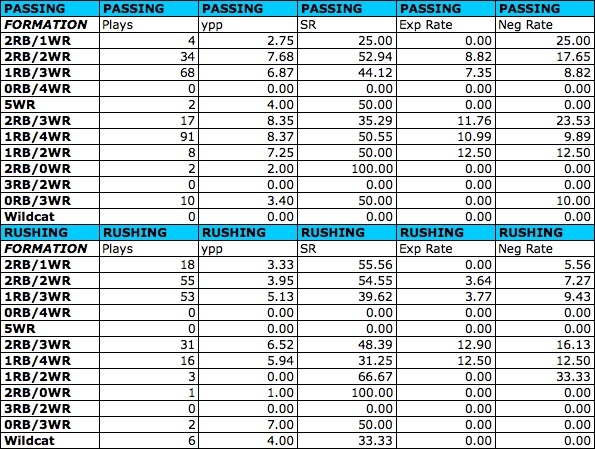 One of the more impressive passing stats is the deep throws (more than 25 yards down field in the air).  The 46.15% completion rate is higher than three Div 1-A teams' total completion rate.  I've never been a big fan of the bubble screens, but when thrown to some truly gifted playmakers they are quite effective. And the bubble screens do open things up for the run game via alignment.  Running between the tackles with consistent success is something that should come next year, after gaining very valuable experience at the interior OL positions.  For now, keep hitting the edges and run out of passing formations.