In the world of recruiting, it has been said that stars matter.

While there are some naysayers who point to diamonds in the rough like Ed Reed, even they admit that those finds are few and far between. That line of reasoning also begs the question on what exactly teams like the Miami Hurricanes are thinking this year.

Filling your recruiting roster just for the sake of filling it is unwise and can hurt the program long term. This fact has been argued successfully many times here on TN, often times drawing the ire of delusional fans who often respond with something like "trust the coaches".

Trusting the coaches is a technique that works great when they are doing their jobs and bringing in the best players they can get on top of excellent coaching, but it’s the ultimate cop-out when they are taking the easy road out and not properly evaluating the talent that is available. Miami has basically surrendered South Florida to FSU and UF, allowing them to cherry-pick who they want. That is unacceptable for a program like Miami, even with the looming NCAA sanctions. But I digress…

The fact of the matter is that in order to be a successful football team, you have to have two basic resources in order to succeed:  A) Coaching and 2) Talent.

You can obtain a certain level of success by being blessed with one or the other, but in order to ascend to the elite echelons of college football, you must have both.

While this piece will certainly leave more questions than it will answers, the intent is to outline recruiting trends since the 2007 season where FSU finished with a 7-6 record, coming off the same result from the 2006 season. I think we can all agree that recruiting had taken a fairly large nose-dive at this point in Bobby Bowden’s coaching career as he was shown to be unable to close like he had in years past.

To highlight the recruiting trends, we will be evaluating the talent being injected into the program based off of final ESPNU150 standings for that particular year.

Since all recruiting classes have a different number of signees, we have shown the ESPNU150 talent recruited as a percentage of the class, rather than a total number of commits. Please check out the graph below to see the percentage increase per year. 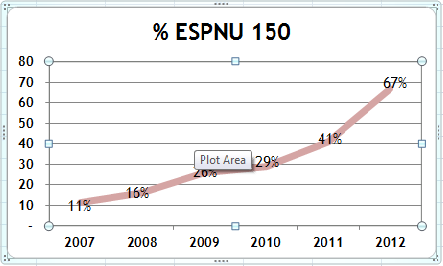 Let’s wrap up by taking a short trip down memory lane with some headliner recruits from each of the classes followed up with a few questions we have compiled based on the data. We’ll make a note of the final record for each season for reference in the follow-up discussion.

In 2007, the Noles signing class was headlined by the #73 player in the country, Dionte Allen. For those of you who don’t remember Mr. Allen, you are not in a minority. The 2007 class consisted of 19 total commitments and the Noles finished at 7-6 on the year.

2008 featured Jimbo Fisher’s first prize recruit in quarterback EJ Manuel, but according to ESPNU the headliner here was #36 Terrance Parks who was considered the #5 cornerback in the country. For those of you wondering, EJ checked in at #51 and Nigel Bradham at #60 in the 150. FSU finished with a 9-4 record this year with Jimbo Fisher being given almost complete control over the offense and starting a young Christian Ponder over the embattled Weatherford.

In 2009 the Noles landed all-star defensive tackle Jacobbi McDaniel who checked in at #5 in the 150. This was a miracle considering what was to become of the FSU defense that year in an uncharacteristic collapse of all things in fundamental defensive football. The mockery of a defensive unit fielded by the Noles that year helped to squander 2008’s offensive momentum and almost ensured FSU’s first losing season in forever. The Noles ended at (7-6) on the season after beating a run-heavy West Virginia team in the Gator bowl who inexplicably decided to try passing all night on the Noles with no success.

2010 saw the first new head coach on FSU’s sidelines since 1976 and saw an immediate spike in recruiting. FSU quickly secured the #6 player in the 150 in LaMarcus Joyner and never looked back on the recruiting trail almost doubling their number of 150 commits from the previous year. For the first time since the 2003 season, the Noles finished with 10 wins on the year with a final record of 10-4.

In 2011 the Noles finished with the #1 recruiting class in the country according to the ESPNU150. The #5 player in the country Karlos Williams committed early and helped the Noles recruit their way towards an astounding (12) total 150 commits. Due to a plethora of reasons still being processed by my feeble and discouraged mind, what was billed to be FSU’s grand entrance back onto the national stage has ended with an 8-4 regular season record, but also with another state championship to boot.

2012 so far is shaping up to be just as good as the 2011 class, if not statistically better. With an outrageous 10 ESPNU150 recruits out of 15 total, and headlined by legacy recruit Mario Edwards Jr., the Noles are once again in contention for the top recruiting class in the country. Aspirations of grandeur for the 2012 season include an ACC championship and possibly a BCS bowl. Anything less than winning the ACC will be an undeniable failure from an objectives standpoint.

Knowing is half the battle, so there you have it. FSU’s recruiting trends since 2007 in a bottle. There are many unanswered questions after the season we have had. What sort of questions do you think this information lends itself towards? There are a few that I have gleaned through writing the piece: