Tomahawk Nation Members From Around The World Mapped Up

Share All sharing options for: Tomahawk Nation Members From Around The World Mapped Up

Editors note:  These maps and story is courtesy of BookemDanole. Please click on the map for a larger version, then click again to zoom.  Also under both maps, please click the link (in red) to super zoom-in to a state/regional level, or to another country on the world map which can be found following the jump.  Many thanks to Dan for taking the time to put this together for us. 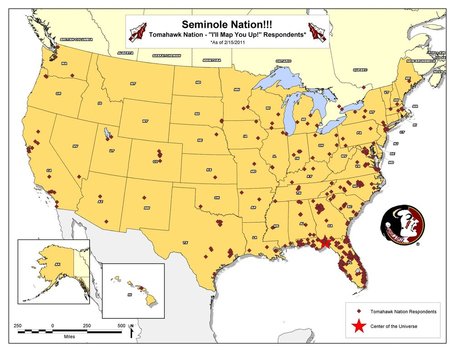 The results are in, again! I was very happy (and surprised) that this was as popular as it turned out to be. Certainly makes it all worth it. This update includes an additional 177 unique respondents, bringing the total to 456!!! Because apparently us Noles have quite the global reach, I thought it was necessary to also include a world map this time.

Before I get to the updated stats and maps, it was suggested that I give you a peek into the highly complex processes I used to bring all of you this essential information. All lame jokes aside, here is what I did. In order to geocode each ZIP code (assign a latitude and longitude), I had to create a simple flat file of all of the data. To do this, I simply copied all of the posts and pasted them into Excel. Then for each post, I moved the "Years" up to the row of the ZIP, but in a second column. At the end of that mundane process, I had two columns: ZIP and Years. Then I simply made a 3rd column, and with an if…then statement, assigned a "Year" group to each entry.

Once I had the flat file ready, I geocoded all of the ZIPs using a program called Alteryx (quite a powerful program which manages both spatial and non-spatial data at amazing speeds). Now some people just gave me an area code (What’s up Nebraska Nole?) or a city or country. For them, I had to take my best guess and just used Google maps to get the lat/long. After finally getting all of the coordinates, I was then able to run the distances between FSU (the Center of the Universe) and each respondent. Again, I used Alteryx for this. I could have used the GIS at this point, but Alteryx makes it easier.

Now that I had all of the coordinates, I was finally ready to produce the map. I used a program called MapInfo Professional, which is a very common GIS (Geographic Information System) used in the retail industry. I added the respondents and appropriate background layers and voila, we got mapped! Ok, now wake up. Stats and maps are up next!

*All stats below reflect responses received as of Tuesday (2/15)

* Responses from 9 countries, including 41 states and 1 province

* Most unexpected: All of the foreign countries, and Nebraska

Hit the jump to view view the world map of Tomahawk Nation members. 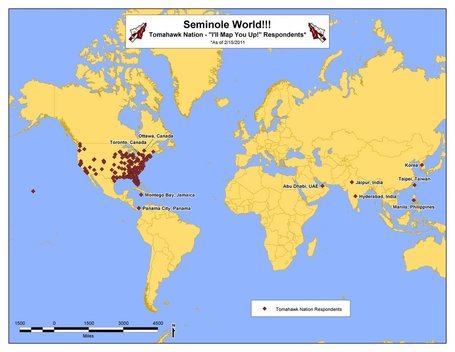