1st and a Mile: A Look at 1st year Defensive Coordinators

Share All sharing options for: 1st and a Mile: A Look at 1st year Defensive Coordinators

So how did the 1st year DCs do? We'll look at a statical comparison of the each BCS / mid-major team's defense, and then look at the change in defensive ranking from 2009 to 2010 to see who is working some magic and who might end up working the street corner.

The table to the right is a composite of all 2010 BCS teams plus Boise State and Nevada that featured a new defensive coordinator for the 2010 season. The two columns are defensive F/+ rank and the defensive strength of schedule (FEI-based) to get a feel for the quality of offenses faced. The table has been sorted by Def F/+ ranking.

For reference, the F/+ metric is a combination of FEI and S&P ratings (give them a click). FEI is a Brian Fremau creation which adjusts for, in other things, garbage time and clock-kills. The S&P Ratings are based on 3 categories:

Boise State and Mississippi State headline the list, with Dan Mullen's team actually playing a tough schedule and Boise State playing one challenging opponent (VT) and giving away a game to a fraudulent team (Nevada). Having said that - earning the #1 Def. F/+ position while playing the 90th ranked offenses means they pummeled just about every team they played. The old adage here: Good teams destroy bad teams.

A simple average of Def. F/+ shows a 50th overall defensive ranking, or about the 42nd percentile of all 120 FBS teams. A ranking stronger than the median team number makes sense here; most are in good conferences that aim to hire accordingly. Florida State comes in at 11th out of 25 on this list with the 41st overall ranked defense. FSU jumped from 48th to 41st after their USC bowlgame performance. 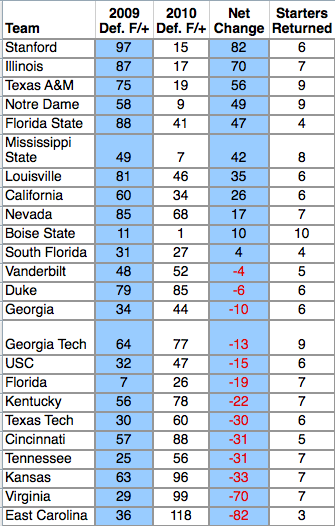 The table to the left shows defensive F/+ ranking in 2009, 2010, the net change in ranking, and the amount of defensive starters returned for teams featuring a new defensive coordinator in 2010.

We see a very wide range in the net change. The mean of the teams is slightly positive (+2 ranks), the standard error is about 42 ranks. Basically, there is a wide variety of outcomes of defensive performances under a new defensive coordinator.

Stanford (+82), Illinois (+70), and Texas A&M (+56) showed amazing improvements under their respective first year DCs. FSU featured the 5th most improved defense (41 rank improvement) of the group, outperforming in-conference opponents Duke (-6), Georgia Tech (-13), and UVA (-70). Al Groh's 3-4 defensive implementation at GT is going to take some time, but you can't fault his defensive units from his days at UVa.

The correlation between starters returning and defensive performance has long been speculated. Recently, a study shows that a defensive unit's FEI ranking improves by +3.0 positions for each additional defensive starter that returns. Check out the MGOblog report here. Upper-classmen heavy defenses are in general bigger, stronger, and more versed in a particular system.

We can do our own correlation study here amongst first year DCs using everyone's favorite open-source statistical analysis software, R. The data is here. Feel free to follow along and mess around with a great piece of software!

We have to do a little prep work to get the data ready for testing. We must convert the "f." ranking to a normal random variable.

Check. We will now do a Pearson Product-moment correlation test here between the normalized 2010 Def. F/+ ranking ("f.norm") and the # of defensive starters that returned for the 2010 season.

But is there a relationship between the Net Change in F/+ and # of starters returning? That is, how much improvement in ranking under new DCs can be attributed to the number of starters they inherit? We can test this, too.

The relationship is positive (more starters returning inherited --> higher net improvement) as we might expect, but it is not significant.

But what about a team like Georgia Tech? GT fired Dave Wommack and brought in former-UVA head coach Al Groh and his 3-4 system for 2010. However, even with 9 returning starters GT managed to drop 13 places, near the bottom 1/3 of FBS teams with new DCs.

Another aberration is FSU. Of teams with new defensive coordinators, FSU tied for returning the 2nd fewest starters with USF (ECU lost 8 starters heading into the 2010 season). However, even with only 4 returning starters FSU improved 47 spots (from 88th to 41st). ECU lost 9 starters to FSU's 8 and their DC (FSU's LB and DCIW Greg Hudson), and plummeted to near the bottom in the country.  There are a few things in play here for FSU, as TN readers know. FSU was not as bad, talent-wise, as 2009's 88th D F/+ ranking indicated. FSU also suffered from being out-coached and out-schemed.

So, what are the takeaways from this?

-Wikipedia for new coaches in 2010

- For more on how to use R, check out this tutorial / walk-through made by Jim Elsner, PhD (Florida State University)