Share All sharing options for: Noles Film Review of the Texas A&M Offense

When our pairing was announced on Selection Sunday I was pleased, not only because I thought it was a good matchup, but also because it was against a team I’d seen play a couple times this season. But then I began to do some research and became confused. Message boarders were posting (on current and old threads) how similar Mark Turgeon’s motion offense was to that of his mentor’s – Roy Williams. Since I’m intimately familiar with ’s offense I wandered what I’d missed on those couple occasions I’d seen the Aggies play.

Luckily the Big 12 posts all of their games on their website. Each night this week I watched a Texas A&M game to break down what they do offensively to see if I’d mis-read their offense from the brief times I’d watched. So when we tune in on Friday are we going to be watching a carbon copy of UNC? Well, the short answer is no. The long answer is after the break.

The first thing to evaluate is the pace of the game, as Roy Williams' teams are typically among the 25 fastest in the country (out of 345 D1 programs). UNC is known for attacking off of opponent's made baskets, which is almost unheard of, and they try to get to the rim within 3 1/2 seconds of a made shot. If they can't, they pull it out and go into their offense. But what about Mark Turgeon's teams. I looked at all the year's that adjusted tempo data is available for ('adjusted' means it controls for what the opponent is doing) and it looks like this, with possessions per game on the Y axis: 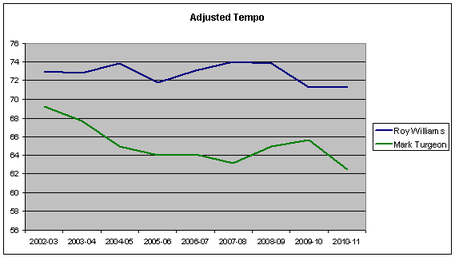 This graph almost encapsulates Turgeon's entire head coaching career (began in 2000-01). Roy Williams' offense has consistently maintained a high pace, while Turgeon's has steadily gotten slower. In fact, only 20 out of 345 D1 schools played at a slower pace this season. So what's the difference between Williams and Turgeon? Roy Williams runs a break/secondary break offense where they're constantly attacking the rim. The secondary break is a form of motion offense in that there are not called plays, but unlike most motions, which are by nature slow offenses, the secondary break prioritizes quick attacks by limiting the decisions offensive players have to make.

What is Texas A&M doing? Well, they'll attack on missed buckets and live turnovers, but the bulk of their time they spend in a conventional motion offense. Remember that motion offenses are based on rules rather than set plays, so there are an infinite number of ways to attack based on how the defense is playing.

Each motion offense is the same, and each is different. It all depends on perspective. There are probably 200+ coaches who run D1 motion offenses, and they all have their own rules, and they all have their own terminology. Since I'm about to describe Texas A&M's offense I should define my terminology. I play on a rec-league team with several guys who either coach or have coached at the high school and/or AAU level. During the game we run basic motion concepts, but after the game when we're discussing what went right and what went wrong we use different terms. I'm a 'stack' guy, where as another would use the word 'set', another would use numbers such as 1-3-1 and another would use the names of cities. But we're all describing the same thing, which is the position of the players prior to the play's start. And after a play starts there are a bunch of potential moves, but if you get used to looking for the 'stacks' as one team is transitioning from defense to offense then you'll get much better at understanding what the offense is trying to exploit, and what the defense is trying to cover.

If you're a football guy, imagine that each 'stack' is an offensive formation, and that all 11 players have variable options dependent on how the defense plays them.

Texas A&M runs a fairly vanilla offense in that they only utilize a few stacks. I don't have room to cover them all here, but I will look at three that they commonly use against man defense. Again, there are multiple variations out of each stack, but the key is trying to catch early enough which stack they're getting into, as then you'll know how you want to defend it. One of the reasons FSU's defense is elite is the speed at which they diagnose the opponent's motion offense. Often, just around the time our guys are crossing the timeline on their way to play defense, one of them is already calling out the stack the opponent is about to run.

The first is a 1-1-3 set (or 'T stack' in my terms). In the first image (apologize for the quality of some, but that's what available on the Big 12 website) you can see that there are three players stretched sideline to sideline (A&M in red), with a screener around the 3-pt line, and the ballhandler. The key here is the screener (Keith Davis) not showing which side of the defender he'll screen. This makes his man sag back toward the lane so that Davis can't sprint to the rim. 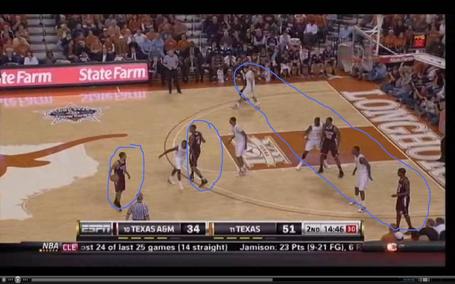 In the 2nd image, Davis has screened for the ballhandler (B.J. Holmes) who is trying to turn the corner. His primary options here are to kick it back out to Davis or to take it to the rim. 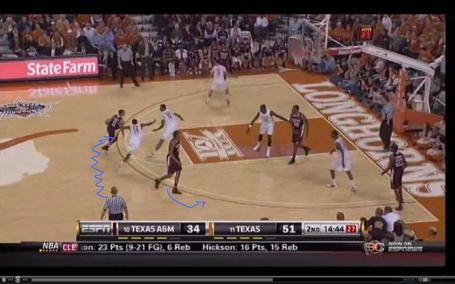 As we can see in the 2nd image he's got his defender beat, so knowing that he can blow past the big man he takes it to the rim. The three Texas defenders converge on him so he dumps the ball to Kourtney Roberson for the lay up. 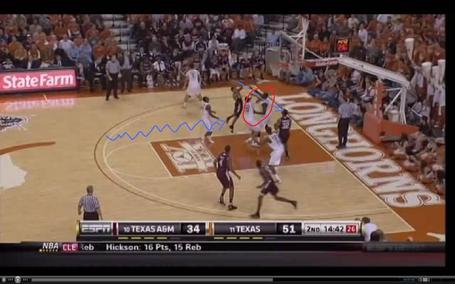 In the 2nd set of images A&M (again in red) is running what appears to be a classic zone offense with all 5 players starting outside of the arc. 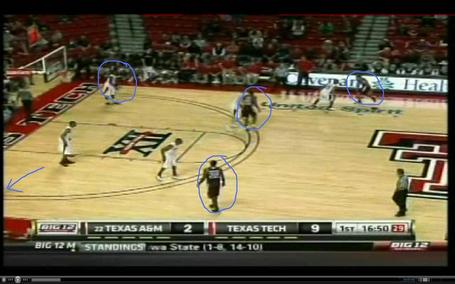 But you'll notice in the 2nd image that none of the three offensive players on the baseline side of the stack have moved, and instead they're running a two man game up near the sideline. This is straight out of Roy Williams playbook who likes to attack from the sides. B.J. Holmes screens for the ballhandler. 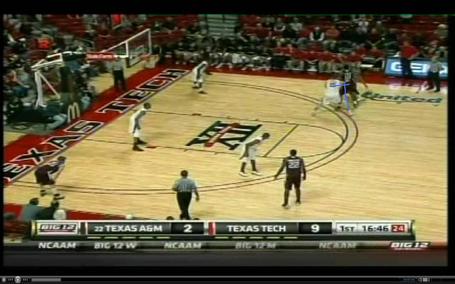 In the 2-man game the ballhandler takes it to the rim. The only help defense is coming from the nearside (image) corner  which is Nathan Walkup's man. Had he been in time to cut off the drive Texas A&M could have kicked it into the corner for a three, but in this case they take the layup. 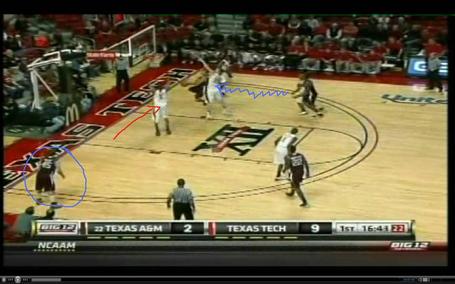 Our last play in one of the oldest in basketball - the double stack. There are two offensive players lined up on either side of the lane, and the uppermost pair screen for the other two, with the ballhandler moving toward one sideline. 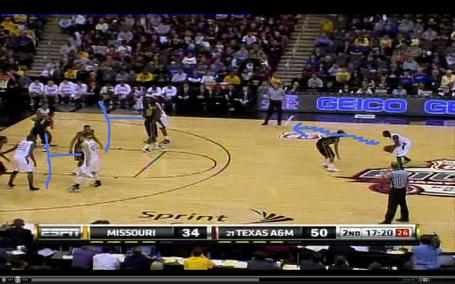 In the 2nd image the two players who were screened for now pop out for a pass, while the weakside screener (Walkup #45) curls back toward the ball. 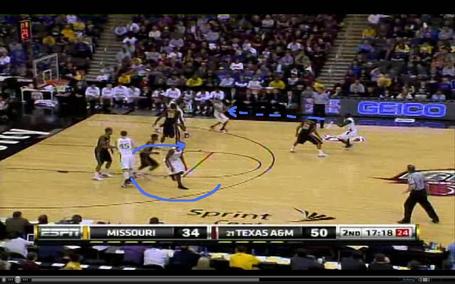 Now the new ballhandler passes to the curler, while the original ballhandler cuts through the traffic. 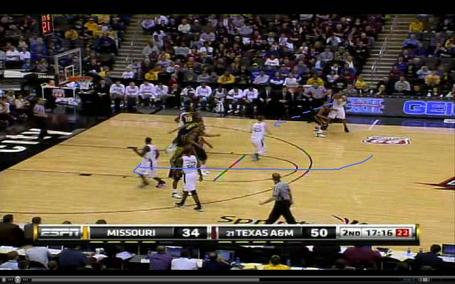 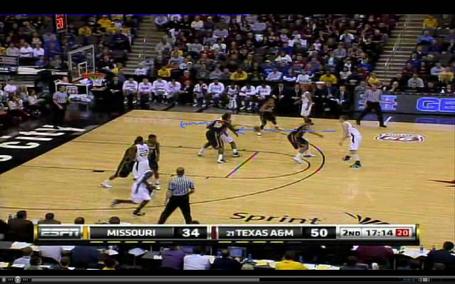 So if you're interested in the nuances of offense, pay attention to the stacks A&M runs against FSU. They'll most certainly be patterns, and those patterns will tell how the Aggies think the Seminole defense is vulnerable. Coach Hamilton's job, on the defensive end, is to have answers to these puzzles.