In a battle of opposites, the Seminoles take the court tomorrow night against the 2-seed in the Southwest, the Fighting Irish of Notre Dame. At this point in the season you know what you’re going to get from FSU so this feature is focused on getting to know Notre Dame.

The Irish are led by 11th year head coach Mike Brey, who had previously led for 5 seasons. Those are his only two head coaching stops. After his playing career ended at George Washington he returned to his high school and was an assistant to legend Morgan Wootten (DeMatha Catholic HS in ). Then he moved on to Duke where he was an assistant to another legend, Mike Krzyzewski, for 8 seasons before being hired on at Delaware.

The primary difference between Brey and his mentors is his lack of attention to the defensive side of the ball. He’s stated publically that he’ll willingly sacrifice defense to maintain proper offensive execution, and to that end he has few peers. He’s the offensive version of Leonard Hamilton. Unfortunately, like Hamilton, his one sided approach hasn’t led to much post season success. In 8 trips to the NCAA Tournament Brey’s teams have survived the opening weekend just once (once in 5 trips for ). Luckily the two coaches drew each other this year, so by default one will advance.

Here is the average national ranking of these two polarized squads over the past 9 years: 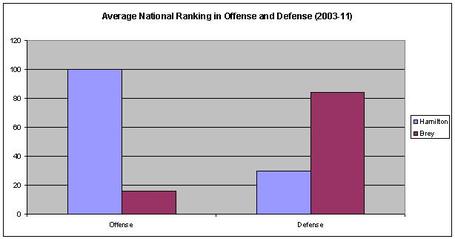 Brey calls his offense the "94-foot motion." It’s a standard 3-out 2-in motion with a key exception. Motion offenses are by nature slow, and when you don’t run stacks (as shown in the Texas A&M film review) then there’s typically a lag time from the moment the point guard crosses half court until any real action happens. This is because the offensive players are all making their reads, and then reacting according to the rules of their offense. Brey wants an offense that flows from full-court to half-court without hesitation. So during transition he uses audibles which dictate the opening moves of the motion. For example, this video shows him teaching the audible "Cross" which is exactly what it sounds like. The 2-guard and small forward both begin in opposite corners, and then cross through the paint where they receive screens from the post players which allows them to pop free on each wing. The point guard will then distribute the ball to one of them who will turn and look to the post (or make another offensive move). If you are interested in learning all of their audibles, former assistant Sean Kearney breaks them down in this article.

The results of his 94-foot motion offense, at least during his first 14 ½ years as a head coach, was a motion offense run at a significantly higher tempo than most. In fact, the efficiency of the offense was directly correlated to the speed at which it was run. Here’s a look at his teams adjusted tempo charted against offensive efficiency since 2003 (the year those data became available): 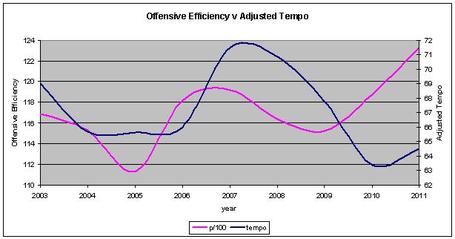 The pink line (points scored per 100 possessions) followed the blue line (possessions per game) closely, until 2010 that is. There we suddenly see the tempo drop to the lowest point of his career, while the offensive efficiency rose to the highest point of his career. So what happened? The answer is Luke Harangody’s knee. He went down on February 11th,  and at that time was averaging over 20 points a game and nearly 10 boards. Notre Dame immediately lost their next two and fell to 6-8 in the Big East. But then Brey decided to do something radical which was to go to his "burn" offense. The burn is what he’d traditionally run in the last four minutes of games where he had a lead. It is designed to run time off the clock and limit possessions. In the four remaining games of the regular season he stepped off the gas enough to average only 56 possessions a game, which, over the course of an entire season, would have placed ND as the slowest team in the country. They won all four games. So in the Big East tourney he slowed it down even more, averaging 53 possessions in three games, losing in the semi’s to eventual Final 4 team West Virginia. They then lost a crawling 54 possession 1-point game to Old Dominion in the opening round of the NCAA’s. But the lesson was learned, and in 2010-11 Notre Dame had the slowest tempo of any Big East team (though not in the burn 50s).

With Harangody in the NBA this year’s Irish are led by five seniors starting with 6’3 G Ben Hansbrough and 6’8 forward Tim Abromaitis. Hansbrough (’s younger brother) played two seasons at before transferring (he was in the same recruiting class as Josue Soto). He’s a career 40+% three-point shooter, and this year is knocking them down at 43.7%, and leads the team in points (18.4), assists (4.3) and turnovers (2.5). Abromaitis is another elite shooter, and averages 15.3 a game largely by making 43.4% of his threes. He’s not a Scott Wood type player however, as he’s a true dual-threat scrorer. 6’8 forward Carleton Scott, who’s likely the biggest beneficiary of the slower offense, averages 11.4 a game (shoots 37.5% from three) and is the best defensive rebounder on the team. Forward Tyrone Nash, when he doesn’t foul out, is there to play defense and clean up the offensive glass. And the final senior is 6’8 Purdue transfer Scott Martin (a junior in eligibility but Notre Dame lists players according to their academic status). The big lefty guard is averaging 10 a game.

Another arena is which these two coaches differ is in their rotation. While coach Hamilton prefers a deep bench from which he can substitute without stop for 40 minutes, Brey takes the opposite approach and runs his starters until they fall apart. FSU has 11 guys who average at least 13 minutes a game, while Notre Dame has 6. That 6th player for Notre Dame is 6’1 freshman PG Eric Atkins who’s role has diminished since conference play began, and he rarely shoots the ball, averaging 5.8 points and 3.1 assists.

Notre Dame is almost completely reliant on scoring from beyond the arc and from the line. They score a smaller percentage of their points on 2-point shots than 323 of 345 D1 schools. They are going to spread FSU out defensively, and if they have a good shooting game then I don’t think we can win. As a team their eFG% is 54.1, which is 15th in the country, while FSU limits schools to 42.2%, which is best in the country. In 18 of 23 (78%) games against top 100 opponents Notre Dame has scored more than a point per possession, while only 3 of 21 (14%) similar opponents have scored at that rate against FSU.

Their defense is defined by what they don’t do, which is force turnovers, commit fouls, or give up offensive boards. They mix man and zone defenses.

All of Notre Dame’s 6 losses this year were to tournament teams.