Top Quotes Following FSU's Pounding Of Irish - How Sweet It Is

Share All sharing options for: Top Quotes Following FSU's Pounding Of Irish - How Sweet It Is

While we should all try to not get too full of and ahead of ourselves, last nights spanking of Notre Dame was perhaps the biggest win for the FSU basketball program in many of our younger readers lifetime.  So far.

The Noles not only beat down the Irish with their nasty smothering defense, but also pillaged the Irish's Pot O' Gold and sent the Domers packing and back to the misery of South Bend, humiliated and whimpering with their green tails tucked between their legs.

That said, we feel the time is right to dust off our top quotes series from the archives for your reading amusement and enjoyment. 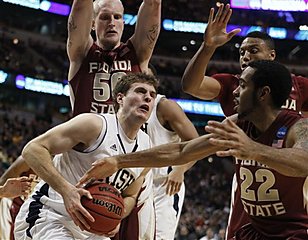 "I can't say enough about how proud I am of our players and how focused they've been since we lost in the ACC Tournament. Through the ups and downs this team has grown and matured in a lot of different ways. They've been extremely attentive, very focused." -FSU coach Leonard Hamilton

"Florida State flat-out beat us. Florida State deserved it and really outplayed us, especially the first 20 minutes. I thought if we had to give up something, we'd give up jump shots. But they made them, and then we're digging out of a hole. We're kind of numb because we invested so much. It just comes to a screeching halt. -Notre Dame coach Mike Brey

"When our guys were getting spot-up 3s, they're pretty good at knocking 'em down. Once they got on a roll, they just kept going." -Bernard James

"I thought our guys were really focused, they stuck with the game plan, they executed, made the extra pass and moved the ball. We stuck to the plan by playing good, solid fundamental defense." -Leonard Hamilton

"The momentum was on their side, it was basically a home game for them. The crowd got so loud when they got it down to 12. I got fouled and made a few free throws and kind of quieted the momentum down and we took care of the rest." -Derwin Kitchen

"He had three IV's today. He was sick, we didn't know he was going to be able to perform at all. But he gave us a tremendous effort." -Hamilton on Bernard James

"I'm still not feeling 100%. I actually felt like I had to vomit the entire game. I just felt like it was right there in my throat. I tried to focus as much as I could and played as hard as I could. I really didn't know how much I'd be able to contribute tonight. I was glad I could give the minutes that I did." -Game MVP Bernard James, who played 21 minutes after being administered 3 IV's on Sunday after being sick all Saturday night and Sunday morning.

"Hopefully, this is just the beginning of something special. The good thing about this team is I still think our best basketball is ahead of us." -Leonard Hamilton

"I am a little surprised how it played out. The lead we got, I thought we were going to win by five, 10. I didn't imagine that we would be up by 20 at one point. That's a great feeling. It shows what our team can do when we're playing together and playing our game.'' -Bernard James

"You couldn't get stuff around the bucket. You're going to have to make more jump shots over the top and we couldn't. The combination of their defense and seven three-point shots put us on our heels." -ND coach Brey

"You have nights where you can't hit any shots. The first 30 minutes we couldn't hit any. We normally make those shots, but Florida State's defense, their length and athleticism, has something to do with it." -ND's Tim Abromaitis

"It means the progress that we have been making will obviously receive a certain level of recognition and I also feel that our players will feel better about themselves and their hard work is paying off. For me personally as a coach, I felt all along we could get to this point, but I also feel we can be a lot further along than we are." -Coach Leonard Hamilton

"We had enough guys step up on offense, and that was something we have been struggling with. The confidence then just started to spread throughout across the team." -Derwin Kitchen

"We competed and made it interesting there. But that's a big hole to come out of." -ND coach Brey said after the Irish closed it to 12 points with just under 7 minutes to play

"We couldn't get anything going offensively. They took us out of our rhythm." - Irish forward Scott Martin

"We played a lot of inside-out, you know the bigs on our team, we have kind of struggled this year as far as posting up and doing what we need to do on the offense. I think we executed pretty well tonight, catching the ball and kicking it out when they covered down. -Bernard James

"Out of respect for him, we gave him a lot of attention. We made sure our players understood his tendencies and the entire team's tendencies." -Hamilton on Ben Hansbrough

"Only in my wildest dreams. I'm living my dream right now." -Bernard James on going to the Sweet Sixteen

"I still think our best performances are ahead of us. I hope this is the beginning of something special. I think we found ourselves tonight." -Leonard Hamilton

"They're in the same boat as us. They're just riding off the momentum of their wins and hoping to get some more." -Michael Snaer on the upcoming VCU-Florida State semifinal which will mark the first time in tourney history a 10 seed has faced an 11 seed.

"The tournament is used as a measuring stick by everybody. I don't think you can battle against that line of thinking. But clearly, four months of performance should be a better indicator than four days." -Dan Gavitt, Big East associate commissioner for men's basketball

"Very disrespectful." -Snaer on Gavitt's comments considering how the ACC conference has the most teams in the Sweet Sixteen with FSU, Duke, and NC.

"I have something against the Big East. I don't respect any of their teams' defenses. Marquette is the only team I really feel goes after it, because we played them. We felt Virginia Tech and Boston College should have been in. They put Big East teams in instead because they thought it was a better conference. This just shows them." -Chris Singleton on Gavitt's comments and the lack of respect the ACC has received this year.

"Yeah, they didn't respond. Coach told us that before we went out. He said if we get a big enough lead that they're the type of team that they don't play well coming from behind. We could hear them out there - they were arguing with each other and it was like we kept everything going. We kept that momentum going, we kept executing what we [were] doing and they [were] just falling apart. They was just arguing with each other and everything." -Derwin Kitchen

Please visit Andrew Carter's Chopping Block for a nice video interview with Michael Snaer where he explains his untimely technical foul, the Irish zone (or lack of), and his thoughts on having to cover Hansbrough, as well as interviews with Hamilton and Kitchen.