Share All sharing options for: Previewing Florida State (10) vs VCU (11)

After a great 1st weekend in the NCAA Tournament that saw FSU win a tough game vs Texas A&M before dismantling 2-seed Notre Dame, the Noles now play a Sweet-16 matchup versus an improbable opponent in Virginia Commonwealth. If you haven’t been keeping up, check out our First Look at VCU, as well as a breakdown of their starters.

This is just the fourth trip to the Sweet-16 in program history, and FSU won two of the previous three.

The NCAA Tournament is all about matchups, and so far FSU’s slate has been favorable. We were theoretically the underdog in round 1 being a ten seed, but were matched against an over-seeded Texas A&M squad. The Aggies style and personnel made them a tough challenge for the Seminoles, but anytime you play a higher seed and Vegas sees the game as a coin flip then something is working in your favor. In the 2nd round we drew Notre Dame, a team that quite frankly should have beat us, but still, the matchup was a good one as ND depends so heavily on the three and running their offense in rhythm which are two things FSU’s stingy defense can take away. After Notre Dame wilted under the pressure, we advanced to take on 11th seed VCU.

At this point in the tourney, both teams should be happy they’re facing double-digit seeds. But who wins the matchup battle? Come inside and find out.

The first thing that jumps out on film from VCU games is their propensity to work inside-out. All season I’ve been kicking things as routinely starts jacking threes that don’t fit into the flow of the offense. Then we inevitably settle down in the 2nd half and start working the paint. VCU, to their credit, is focused on the offensive end and maintains their gameplan for 40 minutes. VCU doesn’t have the size of FSU however, so their inside-out game ends more often on the "out", as only 28 Div 1 schools score a higher percentage of their points from the three.  The Seminoles, however, are stingy against all shots – 1st in the nation against 2’s, and 10th in the nation against 3’s. In fact, as our friend at The Audacity of Hoops shows, the more 3-pointers teams typically take, the poorer they perform against FSU. So as his graph shows, FSU’s gameplan, even against a smaller team like VCU, will likely be to continue to shutdown the paint and force them to kill us from outside. Our defensive efficiency improves against teams that rely more on the three. 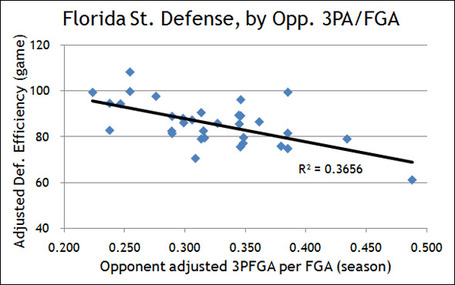 But how are we going to stop the three? For starters, let’s look at a team that’s not even playing anymore – Old Dominion. ODU was the last team to defeat VCU, so I watched their game and noticed something odd. Against a team that lives on the three-ball, ODU spent the entire game in a defense that is exploited by the three-ball. Of course ODU plays a lot of zone defense, but what jumped out was the type of zone, shown here. 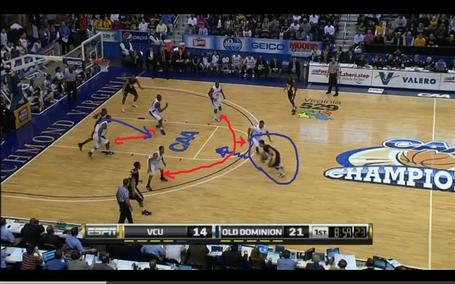 So what’s odd about that? If you recall the FSU/Texas A&M game, the Aggies jumped out to an 8 point lead in the 2nd half before Derwin Kitchen hit a huge 3-ball to cut it to 5. Shortly thereafter the under-16 t.v. timeout came and when FSU emerged from the huddle they went to a zone defense for the first time all game. And FSU stayed in the zone for the rest of the game, marking are longest stretch in a zone defense since the Baylor game. And here’s a picture of that zone. 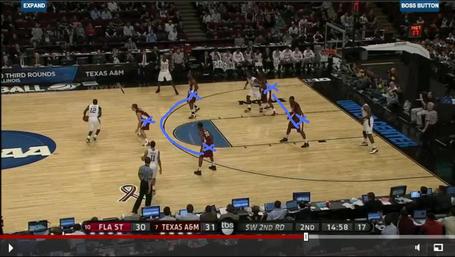 Note the similarities with the ODU zone? The really strange thing is that FSU, to my knowledge, hadn’t played a 3-2 this season. That we busted it out in a key moment of a Tournament game is testament to Coach Hamilton’s ability to teach defense. That it just happens to be the same unorthodox zone that last stymied VCU probably isn’t foresight on our staff’s part, but you can be sure they’ve picked up on it by now.

How much zone will we see out of FSU? Probably not a lot, but as explained in the earlier features this week, VCU’s roster presents a challenge as their bigs can step out and hit the three at a 40% clip. Mixing in a zone will protect guys like Xavier Gibson and Jon Kreft who have difficulty defending 21 feet from the basket.

Of course VCU’s past three opponents – USC, and Purdue – have had to deal with these same issues, and what they came up with ended with the Rams scoring 1.22 points per possession. That kind of scoring, to put it in perspective, is significantly better thanwhat  the #1 offense in the country () did in conference play. Part of that efficiency is that senior Jamie Skeen is hitting 57% of his 2’s and 52% of his 3’s, and part of it is that VCU has only turned the ball over 19 times in 187 possessions. If they played the season that way they would have turned the ball over fewer than any other team in the county, and by a wide margin. To put it simply, if VCU doesn’t regress toward the mean, FSU fans are in for a long night.

On the other side of the ball VCU produces unique challenges as well. As I covered earlier, they haven’t played a team in the tourney that’s anywhere near FSU’s size (which is a tremendous advantage for us). Instead they’ve drawn similarly sized teams or teams which are slightly bigger. Still, VCU has a defensive philosophy that they use against all teams, and could be effective against FSU assuming we don’t shoot anywhere near our Notre Dame level. When the ball goes inside VCU collapses so that their smaller perimeter players and mid-sized bigs can cut off the inside game. The flip side of that, as illustrated here, is the amount of room it leaves on the three point line. 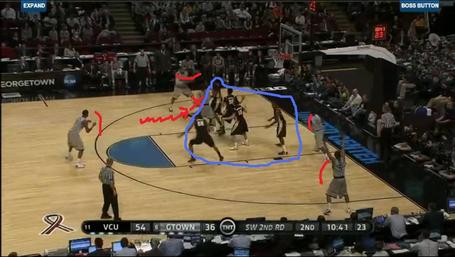 The 2nd challenge of course is the VCU press. The Rams run a zone press which won’t exert the type of pressure were accustomed to in games against UF or the Oliver Purnell Clemson teams. But the tradeoff is that zone presses don’t surrender as many transition buckets, as they flow more smoothly into half court defense. This first image is breaking the zone press with a long inbounds pass up the sideline. Note the formation of VCU whose players are guarding areas rather than players. 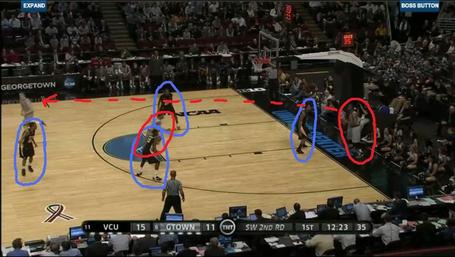 Next is Drexel, who appears to have the press beat after the inbounds. 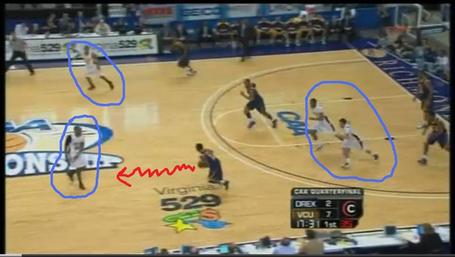 But as the zones collapse VCU flows into a secondary press which stops the ballhandler shortly after he’s crossed midcourt. 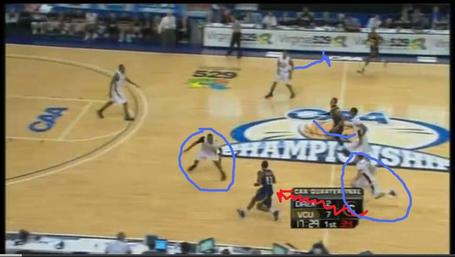 Finally, VCU traps the ballhandler and gets a jumpball. 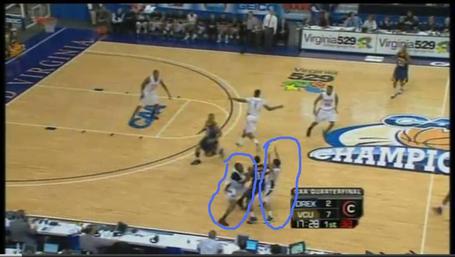 As you are aware, FSU has the tendency to turn the ball over at a remarkable rate (312th in the country). If we can consistently gets shots off, we’ll win this game. If VCU creates transition turnovers that lead to points, then we could be in trouble. And I think that's what this game comes down to. It's not necessarily turnovers, but more the type of turnovers. Dead ball turnovers in the form of charges and out-of-bounds wouldn't be a big deal, but if VCU can consistently turn us over in transition then FSU players will likely be packing their bags.