After Georgia Tech ponied up the $7.1 million dollar buyout of Paul Hewitt’s contract they began a search for their next coach. Unlike the other ACC currently filling a vacancy – NC State – Georgia Tech doesn’t have some misguided notion that their program is among the most high profile jobs in coaching, and so they didn’t waste a bunch of time and money focusing their search on coaches with no interest in the job. The Yellow Jackets approach was quick, quiet and efficient, and in a 5pm press conference this afternoon they will announce the results of that search. The new Georgia Tech coach is Brian Gregory from the .

One of the constants in coaching searches for major programs is that if the new hire isn’t a recycled major coach or a mid-major coach currently making a run in the NCAA Tournament, then the fan base immediately freaks out. See ’s reaction to the hiring of Cuonzo Martin, the coach I was holding out hope would be Coach Hamilton’s replacement when he retired. The initial reaction from Tech has been mostly negative with this hire as well, but how good is Gregory?

Gregory is from the Jud Heathcote coaching tree, having become an assistant for him at when Gregory was 23 years old. But his greatest influence is from another Heathcote assistant at the time, current head man Tom Izzo. Brian Gregory was an Izzo assistant for two separate stints, and current ESPN analyst Fran Fraschilla considers Gregory to be the most Izzo-like coach in the game. In temperament and style he bases most of what he does on Coach Izzo.

His team, the Dayton Flyers, play in the Atlantic 10, and have the resources and facilities to compete annually in the conference. Georgia Tech meanwhile is located in one of the premier talent producing cities in the country. They’re currently constructing a $45 million dollar arena refurbishing, and have every opportunity to compete annually with every program in the ACC besides Duke and UNC. So the situations, when focused on the conference, are comparable.

But what about his coaching, and what effect will his style of play have on the ACC? Just last season the conference suffered through the extremely questionable hire of Jeff Bzdelik at , and while the other two recent coaching hires (Tony Bennett at Virginia and BC’s Steve Donahue) have a lot of promise, their style of play is slow and boring for the casual fan.

The only data we have to examine Brian Gregory comes from , as that is his only head coaching position. The following chart shows the annual national rank of his offense (in black) and his defense (in yellow) in his years there. As we can see his offense has consistently struggled, while his defense has shown improvement in his tenure. It would appear that his defense is catching up to his mentor’s, but that his offense struggles.

And what about his tempo? Well, if you’re a fan of grinding, ugly games, then you’ll be happy with this hire. The next chart shows the highest, lowest and median tempo ACC teams since 2004, along with the tempo of Gregory’s teams. In that time period the ACC has been getting slower, and now we’re adding another coach who likes to grind it out. 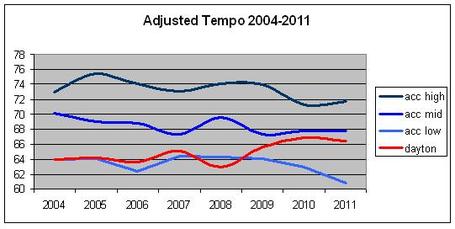 Conclusions? I think this is about a 6 on a scale to 10. His style and focus on defense will likely bring a more consistent product to , but he certainly hasn’t demonstrated anything that should make Tech fans feel as if their administration has hit a homerun with this hire. And for the conference, the ACC is slowing down even more. The Big 10 is still the posterchild for why we need to knock 5-seconds off the shot clock, but with a few more hires like the recent ones the ACC isn’t far behind.