For any of you that have ever engaged in discussion over the all-time great running backs, your argument undoubtedly included statistical achievements--total yards, touchdowns, yards per carry, etc.—and you likely picked the category that shed the best light on your particular opinion.  However, some players get the luxury of running behind all-pro blockers their entire careers while others may find it typically necessary to elude several tacklers just to get back to the line of scrimmage…not to name names here, but you get the idea.  So, how can we separate blocking support from running back quality?  My never ending quest to numerically describe the greatest game this world has ever known leads us to this little statistical exercise.

Assuming that it was possible to separate a team effort into individual parts I set out to find a dividing line between the work done by blockers and that by the ball carrier.  The basic idea here is that the offensive and defensive fronts are the majority shareholders near the line of scrimmage—presumably extending a few yards beyond—and further advancement, once clear of the heavy traffic, is more about the ball carrier.

In order to find this imaginary dividing line I examined running play after running play, yard-by-yard, to determine frequencies with which each additional yard was gained after reaching the line of scrimmage.  In other words, of all the runs that made it back to the line of scrimmage, how many gained at least one yard.  Of all the runs that gained at least one yard, how many gained at least two, etc.  Let’s call this method the "Extra Yard Frequency", just so it has a name.  The dividing line could then be found where a significant frequency change occurred.

Since the ease with which yards are attained vary by situation, play filtering was necessary.  As such, I’m only looking at plays that occurred during competitive regular season conference game time to ensure each team was still in it to win it, and that each game was meaningful.  I’m also only considering standard downs to provide relative assurance the plays were run against base defenses that had to at least respect the run (it’s much easier to run for five yards on 3rd and 12 than it is on 3rd and 4).  Since I’m not trying to determine how fast the running backs are the analysis only extends to 15 yards beyond the line of scrimmage (LOS).  Finally, redzone plays are excluded because, once again, yards are harder to attain and many of these plays do not have enough field left to even potentially make it through the analysis range.

There were just over 2100 regular season ACC game plays in 2010 meeting the above criteria.  Looking at the numbers it is difficult to recognize any discernable patterns, but pictures are always useful.  The following graphic displays the average frequencies--starting with getting back to the LOS and extending one yard at a time out to LOS+15—with which each additional yard was gained. 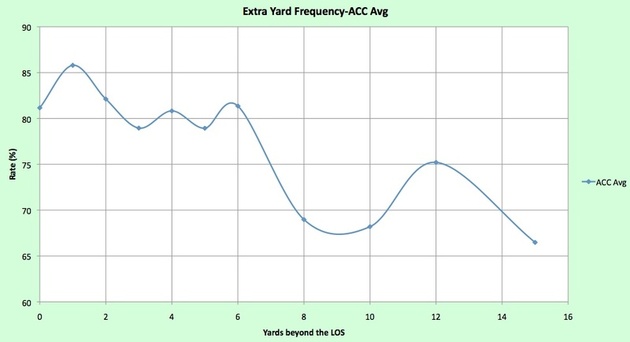 What we are looking for here is a significant change in trend to indicate something has changed on the field.  Notice the graph can be broken up into four regions.  From LOS out to about LOS+6 the rate fluctuates, but not more than about +/- 3% about a mean trend of 82%.  This suggests a relatively constant frequency of picking up each additional yard (X+1), given the previous mark (X) had been achieved.  Between LOS+6 and LOS+9 there is a drop from about 82% to 68%, indicating a significant reduction in the chance of picking up each additional yard in this region.  From LOS+9 to LOS+12 there is a noticeable increase, followed by another drop off to LOS+15.  Could these regions represent the different "levels" of the defense?  While not conclusive, it does make sense the ball carrier should have a decent and relatively constant chance of picking up additional yards while afforded the protection of "a hat on a hat".  If he makes it through he is then out-numbered in somewhat open field by defenders of similar athleticism—which could explain the drastic rate drop.  If the second level is successfully negotiated he is now really in the open field only to encounter typically faster defensive backs closing in, which might explain the increasing trends out to LOS+12, followed by a reduction to LOS+15.  It should be stated again that there is nothing definitive here, but the trends are difficult to ignore.  As such, I can only offer a possible explanation.

Now let’s take a look at how FSU’s 2010 running game did compared to their opponents’ averages. 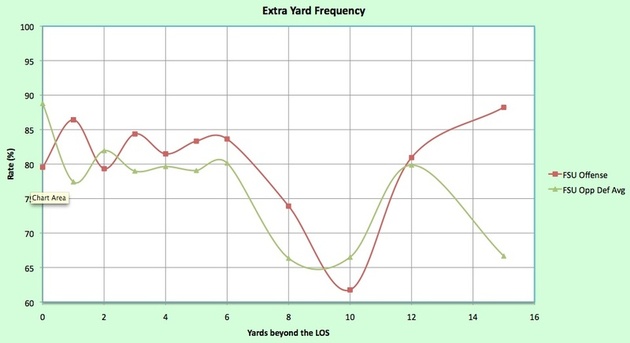 The first thing you’ll notice is FSU’s offense struggled to get back to the LOS—in fact, they had the fourth lowest rate in the league.  Upon reaching the LOS they were steadily above average in the traffic zone and even into the second level.  The dip of ~ 5% below opponent average at LOS+10 is not especially alarming.  What is very interesting is the increasing trend beyond LOS+12.  After much deliberation I can offer two possible explanations for this trend—they were the only ACC team with this trend—either FSU’s backs were elite in the open field….or they had elite down field blocking.  It is also worth mentioning that the defenses FSU faced were not particularly good at stopping runs behind the LOS, but about 2-3% better than average throughout the traffic zone.  In fact, the league's two best defenses--Boston College (#6) and Clemson (#10)--were among the worst at making tackles in the backfield, but very good at limiting gains beyond the LOS.

Having reached the end of this exercise I leave you with one last graphic for your own interpretation.  Below are the rates against the 2010 FSU defense compared to their opponents' averages. 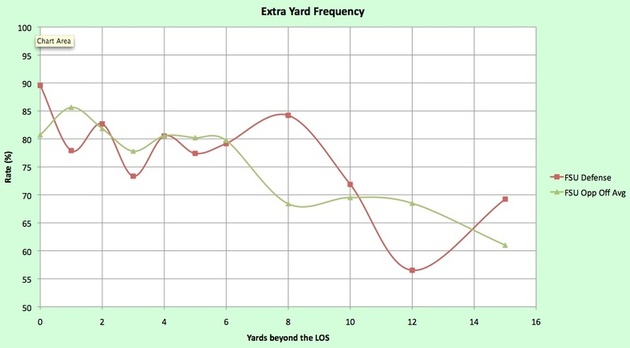