What propels a coach into the ranks of the "all time" greats? A popular and interesting approach to this question as of late is to look at his (or her) "coaching tree." Much has been made of the coaching trees of NFL legends suc 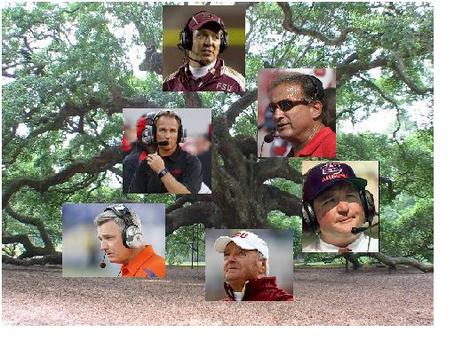 h as Bill Parcells, Marty Schottenheimer and Bill Walsh. In the college ranks, coaching trees are more difficult to piece together, but there are a few noteworthy ones such as those of Bear Bryant, Woody Hayes and Knute Rockne. So is this a mark of greatness? Clearly there is more to a coach's legacy than the coaching tree he leaves (no pun intended) behind, but it is arguable that a sprawling coaching tree says something about a coach's legacy as a coach. A winning program can be explained in a variety of ways: Xs and Os, personality, location, recruiting, poor competition, luck, etc. But when multiple assistants go on to successful coaching careers, the best explanation for this seems to be that they adopted a winning philosophy from a skilled mentor. (Insert comment about the proverbial apple . . .)

Below the jump, I look at Bowden's coaching tree and attempt a bit of botanical evaluation. Does Bowden's tree help secure his place among the pantheon of all-time elite college coaches?

So what is a coaching tree? The wikipedia article on the topic says this: if a coach worked as an assistant on a particular head coach's staff for at least a season then that coach can be counted as being a branch on the head coach's coaching tree. For example, since Will Muschamp spent at least on year on Mack Brown's staff at Texas, Muschamp is a branch on Brown's tree. In my mind, this makes it a little too easy for Coach A to wind up on Coach B's tree. Mainly because most coaches have spent time on the sidelines at multiple schools and one season is hardly sufficient to imbibe a head coach's philosophy. However, if we tighten up the requirements for branches, we run into other problems. Trees become much smaller and far less intriguing. Also, if we require that branches somehow reflect the philosophies and strategies of their previous head coaches, then we are stuck with the messy task of demonstrating this philosophical similarity. So, I have simply adopted the rough and ready wikipedia definition. It's simple, verifiable and generates interesting trees. I will, however, make two small and reasonable modifications: (1) I count a coach's physical offspring (Terry & Tommy) as branches, and (2) I'll even count service as a graduate assistant on a coach's staff as sufficient for branch-hood.

Below is my best shot at a Bobby Bowden coaching tree. The colors represent the following: (a) blue for head coaches who are no longer active as head coaches; (2) yellow for active head coaches, and (D) green for notable assistant coaches. Normally a coaching tree includes only head coaches but I threw in a few assistants just to spice things up a bit. Who knows-these may be future top bananas. You'll notice I've also included each coach's win-loss record as a head coach (all schools included), expressed as win-loss totals and as a percentage. (Sorry the charts came out a little fuzzy.) 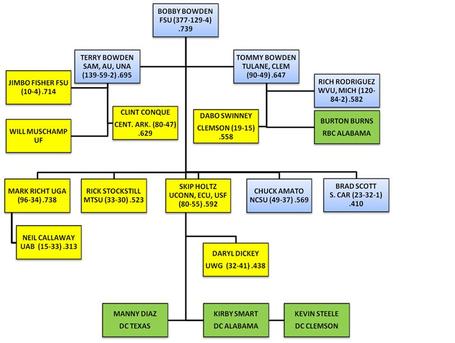 Several things may require some explanation. First, as I mentioned above, someone is counted as a branch even if they only served a year as a grad assistant. This extremely liberal take on branches results in several questionable twigs. For (non-FSU) example, I mentioned earlier that Muschamp can be counted as a branch on the Mack Brown tree. But it could easily be argued that Muschamp is a Sabanite due to his time at LSU. Do we count him in both trees? Sure, why not! Similarly, some may argue that Jimbo Fisher is more of a Sabanite than a Bowdenian, but he's probably a nice blend of the two. A Bowbanite. Sabowdenian?

Some of these branches are a stretch, I'll admit. To say Coach A is a branch on Coach B's tree is, in some sense, to give Coach B credit for Coach A's performance. It is probably a reach to say that Bobby gets any significant credit for Skip Holtz's success. But many of Bowden's branches did spend significant time with him and would verbally identify Bowden as their chief coaching role model. Mark Richt probably falls into this category. (I placed Dickey lower on the tree to indicate a distinction between FBS and FCS coaches.) Also, if I've missed any branches, let me know in a comment and I'll try to add them. I admit up front that all the trees I've made are almost certainly incomplete. It is difficult to track down every assistant-gone-head-coach.

"Every tree tells a story," or so they say. What does Bowden's tell us? Was he simply adept at finding the best assistants? "One thing that separates good coaches from great ones is the ability to find qualified assistants." (Brad Oremland, Sports Central)  Or did Bobby's genius rub off on his subordinates? So let's see what sort of numbers we can pull from the tree, and what stories they might tell. A big tree is impressive, but having a dozen branches doesn't mean much unless these branches go on to win. What about average winning percentage of all Bowden-branches combined (not counting Bobby's wins)?

Another means of comparison would be with other coaching trees. Surprisingly, some of the coaches I wanted to compare with Bowden (Osborne, Paterno) had more of a coaching shrub. So, I tried to find a few coaches who have trees of comparable size. Unfortunately, not many active (or living) coaches' trees have had time to mature like Bowden's has Saban and Meyer have large trees, but they are all so young that it is difficult to evaluate them. So, I settled on Snyder and Holtz. But again, I ran into a problem: Holtz's tree looks immeasurable. I completely lost steam after tracing Meyer's branch. I guess it was all those years at Notre Dame that gave Holtz's tree its peculiar shape. 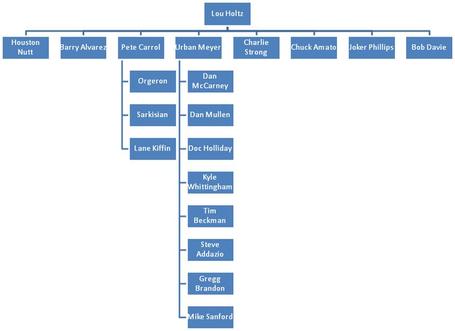 So, how does Bowden's tree compare to Bill Snyder's (below)?

Given that Snyder's tree includes Bob Stoops, Pelini, Bielema and Leach (all perennial winners), I imagined the average win percentage would eclipse Bowden's. But surprisingly, Snyder's comes out just slightly better at .582. If we compare the "direct" numbers, Snyder gets a .623, which puts Bowden's tree squarely under Snyder's shadow. I'd love to compare Bowden's tree with a few other trees, but that would be more research than I have time to tackle. Prediction: Holtz's tree blows Bowden's away. (Readers: feel free to pursue this.)

On the positive side, there are only two coaches in Bobby's tree with a losing percentage: Brad Scott (.410) and Daryl Dickey (.438). Also, the one coach who is undeniably a Bowdenian, Mark Richt, is by far the most successful of the bunch at .738-just a hair shy of St. Bobby himself (.739).

Is a flourishing coaching tree crucial for greatness? Coaching colossi Joe Paterno and Tom Osborne don't have much to speak of by way of trees. Paterno has only one branch I can find-Jim Caldwell, who stunk at Wake but has done well in the NFL. Osborne has four I can find (Moore, Gill, Solich and Hughes) with a measly average of .541. But almost no one questions the legacies of these men, so either Paterno and Osborne really weren't great coaches (craziness) or a big tree is unnecessary for greatness. The latter seems right. Or maybe it isn't size that counts, it's what you do with it.

Honestly, I'd like to draw some really startling or clever conclusions from all of this. But the truth is, Bobby Bowden's place among the gridiron demi-gods really isn't in doubt, and the status of his coaching tree isn't going to change anything. True, the sheer underwhelmingness of his tree is interesting, and it certainly has wilted quite a bit over the last decade. But I'm not about to argue that he wasn't a great coach. Moreover, my research has only scratched the surface of this whole coaching-tree-as-a-criteria-for-greatness topic. What could I possibly conclude from only one semi-thorough comparison with Snyder?

So can we glean anything from all of this? Here's a suggestion: maybe the pedestrian appearance of Bobby's tree is due to the fact that Bowdenism, which had a great run, just doesn't work anymore. A decade or so ago, Bobby's tree looked like a sequoia. Tommy, Terry and Chuck Amato (not to mention Richt) were rising stars looking like big-time winners. But within a few short years, they were all fired (save Richt). Why could they not prolong Bowden-like success? Was there something inherent in the "Bowden Way" that was not sustainable? Even Richt has been on the hot-seat recently, which is in part due to being at UGA and in the SEC. But it appears that the Bowden-way, if there is such a thing, is no longer viable.

But as Seminole alumnus Lee Corso would say, "Not so fast my friend!" Have you forgotten the prophecies?

"There shall come forth a shoot from the stump of Bobby, and a branch from his roots shall bear fruit. And the spirit of Osceola shall rest upon him, the spirit of offensive wisdom and understanding. . . The decade that was shrouded in darkness shall see a great light; they that dwell in the shadow of mediocrity, upon them hath the light shined. . . for unto us a coach is born, unto us a leader is given; and the program shall rest upon his shoulders: and his name shall be called Jimbo, the Mighty Coach, the long-lasting success, the Prince of Pigskin."

Fisher is the New Hope for Bobby's legacy. When you look at the young branches who have grafted in Sabanism with Bowden's old southern charm, they are seeing success. Aside from Fisher, several other notable Bowden-branches who have worked under Saban appear to have bright futures ahead of them: Muschamp (a stretch, I know), Burns, Smart and Steele.

So, Bowden's tree probably didn't put him in the Hall of Fame. It has some strong branches, and perhaps a bright future, but to understand Bowden's greatness we have to look elsewhere. What is the essence of Bobby's greatness? The sheer number of wins? The fatherly influence on hundreds of young men (Brooks and Dunn to name two standouts)? His unparalleled charm? His (almost) creation ex nihilo of the powerhouse that is Florida State football? I'll leave that to you to hash out.

(Most of the data used here was gathered from Wikipedia and various news publications via google.  Despite this, I think the data is reliable.)